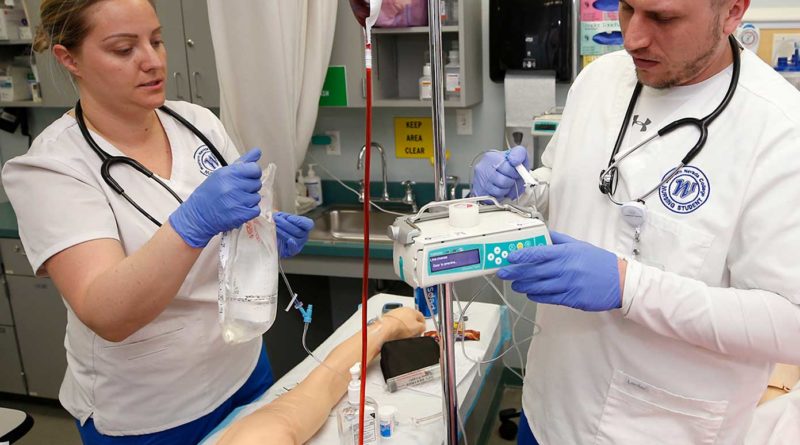 Recognition has come frequently to Western Nevada College’s Nursing Program from a variety of sources during the past year.

The biggest one arrived in February when Nursing Process selected WNC’s program as No. 1 in the West Region, which encompasses 426 nursing schools, thereby making it one of the nation’s top programs.

“We are proud of Western Nevada College for producing quality registered nurses,” said Shehnaz Reddy, a communication officer at Nursing Process. “Congratulations to the students, faculty and administrators of the college!”

Nursing Process is an online resource that simplifies access to nursing education and career information, thereby helping students make better choices. Currently, the site reaches out to more than 100,000 students every month, from all over the country.

“I’m happy for the college. I’m happy for the faculty,” said WNC Nursing & Allied Health Director Dr. Judith Cordia. “The outstanding ranking should remind everyone at WNC that the success of the Nursing Program is dependent upon excellent educational and support standards not only from the Division of Nursing & Allied Health but also from faculty and staff at the Carson City, Fallon and Douglas County campuses, President Dr. Vincent Solis, the college’s vice presidents and the clinical sites including Renown Health, Carson Tahoe Health and St. Mary’s Regional Medical Center.”

Nationally, Nursing Process considered more than 2,726 nursing schools and ranked them based on their program’s academic quality, NCLEX-RN pass rates, the nursing school’s reputation and affordability.

Last month, Nursing Process ranked WNC’s Associate Degree Nursing Program No. 1 in Nevada for 2020. That ranking process utilized by the organization centered on indicators that organization members believe are important in defining a nursing student’s preparedness for success in their personal and professional life. The organization considers four areas to compile its rankings, including academic quality (this includes program retention and graduation rates), NCLEX-RN examination performance (first-time licensure pass rates), affordability and overall reputation of a college or university. From those four areas, academic quality and NCLEX-RN first-time pass rates were given the most consideration to indicate the college’s academic performance.

Last June, RNCareers.org ranked WNC’s Nursing Program No. 2 in Nevada for 2019 with a grade of 94.3 percent, while Registered Nursing currently has WNC No. 3 in Nevada with the following assessment of the program:

To learn more about WNC’s No. 1 ranking in the West, go to
www.nursingprocess.org/best-nursing-schools/adn/.