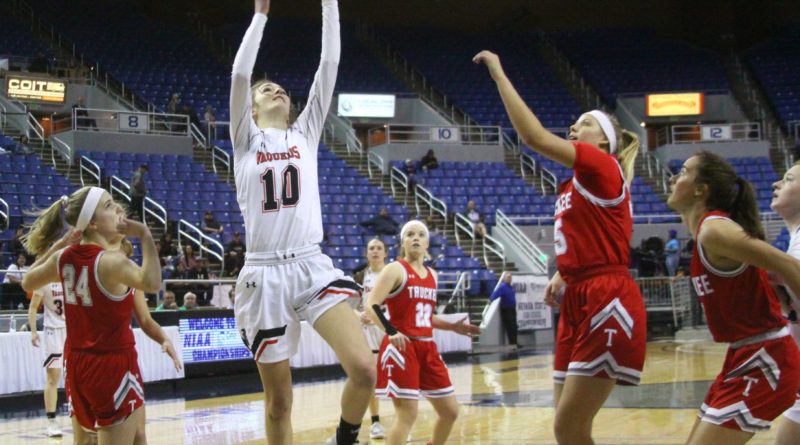 As the arena lights went out for the introductions of the starting lineups, two teams seeking their first ever state championship in girls basketball prepared to square off in the 3A girls championship game of the NIAA/One Nevada State Championships.

A Fernley team that had gone 18-0 in league play and won the league tournament in Fallon last weekend, and hadn’t been to the state tournament since losing to Spring Creek in 2012, faced a Truckee team that hadn’t been there since losing to Yerington in 2008, and which Fernley had already beaten three times this season, including in the league championship game last Saturday.

But it was Truckee that went home with its first girls basketball state championship trophy.

Truckee took control of the game in the third quarter, repelled Fernley’s run in the third and cruised to the wire for a 54-42 win.

“It is really disappointing, but it doesn’t take away what we’ve accomplished beforehand,” Fernley senior Celeste Condie said. “We still had a great season. Truckee played great, we just have to hand it to them.”

Fernley had beaten Truckee by 22 in the first meeting of the season, 13 the second time and by three in the league championship, after Truckee had led by nine in the third quarter.

“I knew it was imminent,” Shalvis said. “It’s tough to come and beat somebody four times in a year.”

In that league tournament game, Fernley had turned things around with fullcourt pressure, coming up with 15 steals.

But Friday, playing on the longer college court at the University of Nevada’s Lawlor Events Center, the Vaqueros’ pressure wasn’t as effective.

“We put something up our sleeve for that one,” Shalvis said. “I knew we could take care of it.”

The Vaqueros still got their fair share of deflected passes, but too often, the loose balls wound up in Truckee hands, often leading to fast breaks.

“We took more chances up front than we normally do, and that hurt us on the back end with them getting layups,” Condie said.

The Vaqueros came out as the aggressor, getting three straight baskets from Willow Jacobson to take a 6-2 lead less than three minutes into the game, but that was the last time Fernley led in the game. Jacobson wound up scoring Fernley’s first nine points and led the team for the game with 12. But midway through the first quarters, Truckee’s shooters, Ryan Flynn, Emma Cooley and Lauren Tanner, seemed to get hot in tandem. Cooley’s 3-pointer with four seconds left in the second quarter sent Truckee to the half with a 30-22 lead.

A fast break basket by Katelyn Bunyard pulled the Vaqueros within 32-28, and twice more Fernley got within five, but Truckee’s Annika Thayer scored on consecutive putbacks to end the third quarter and start the fourth, and Truckee was back up nine.

Flynn’s 3-pointer with 7:08 left in the third quarter stretched the lead to 43-31, and the Vaqueros never got closer than nine the rest of the way.

“We had hoped to come back, because we did that last weekend, we were down by nine in the third quarter, so we knew it wasn’t out of sight,” Condie said. “We didn’t hit our shots, so it just kind of fell away from us. We did get our open looks, so it was doable, just how it goes sometimes.”

As tough as it was to end their season that way, Kingston’s message to the team was that they accomplished much more throughout the year than they lost Friday.

“The ball didn’t fall for us today, didn’t bounce right for us today, but like I told them, it’s always nice to win the big moment, but you guys had so many more moments that will last you guys a lifetime, not just one game,” Kingston said. “Going undefeated for the season, winning the two games at regionals, I told them you guys will remember all that before just the one game.”

Fernley got to the championship game by surviving a hard-fought game with Pahrump, 57-51, in a semifinal game Thursday night at Reno High School.

On a team with 16 seasons of varsity experience in the starting lineup, it was a freshman, Alizah Lara, who led the way, scoring all of her 14 points in the second half, including consecutive 3-pointers from the left corner that finally gave the Vaqueros some separation with a 50-42 lead.

“She did an amazing job,” Kingston said. “I have all the confidence in her. That’s why she’s on the varsity as a freshman.”

Consecutive fast break baskets by Lara had given Fernley its biggest lead to that point at 37-31 with 1:55 left in the third quarter, but Pahrump cut it back to 37-35 before Condie drained a 3-pointer at the buzzer to go to the fourth quarter up 40-35.

It was 44-42 when Lara hit the first of her consecutive threes, and Fernley finished by making five free throws in the final minute, two by Jacobson and three by Jaiden Sullivan.