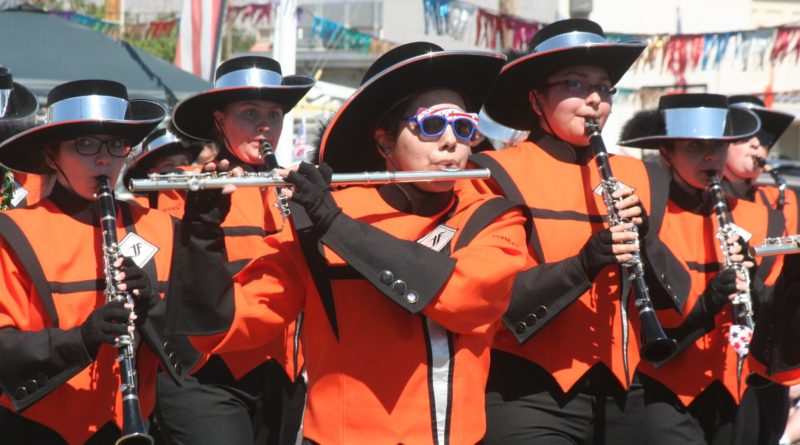 This year, if fundraising efforts are successful enough, the band will have close to 100 students marching in the Independence Day Parade in Washington, D.C.

The FHS band has been nominated by U.S. Sen. Harry Reid to represent the state of Nevada in in the 2017 Independence Day Parade. The band has to raise roughly $1,500 per member, or close to $150,000, in order to participate.

It’s heady territory and a tremendous honor for the members of the band, which has grown to 98 members in the marching band this year.

“Not only would we get to march in the parade, but the students would get to visit the national monuments Washington, D.C.,” director Jason Smith said. “It’s a real, real great experience for the kids.”

Smith is in his seventh year as music director at Fernley High. Under his direction, the band has grown to be the third largest high school band in Northern Nevada with 98 students, or about a tenth of the school’s total enrollment. Although Fernley is aligned in the 3A by the Nevada Interscholastic Activities Association, competes against 4A schools in band competitions.

Not only has the band increased by almost six times the size over the past seven years, but the choir has grown from 20 students when Smith arrived to 70 in the concert choir and 25 in advanced choir.

The marching band hosts five concerts per year, before an average attendance of 500-600 people, and it also participates in five parades a year – Nevada Day in Carson City, Veterans Day in Reno, Armed Forces Day in Hawthorne, the Fernley Christmas parade and Fernley 4th of July.

Smith said the band won first place in its category in to of last year’s parades, earning about $2,500 each time. That helps pay for equipment, which is sorely needed due to the rapid growth.

Smith said one set of drum sticks and mallets costs $600, and a new tuba costs as much as $6,500. One of the band’s current tubas has so many air leaks, they have to use duct tape to plug all the holes.

The band will be hosting several fundraisers throughout the year to raise money for the Washington D.C. trip, and has also set up website for the Fernley music boosters, created a GoFundMe page and is accepting donations through the school.

Smith said it is important that every band member have the opportunity to go.

“If my snare drum, for example, was missing, or one of our tubas, it would throw the whole sound completely off,” Smith said.

The school must commit by December whether it will be able to send the band, so it must have a significant portion of the money committed by then. The deadline for all of the funds is May 1.