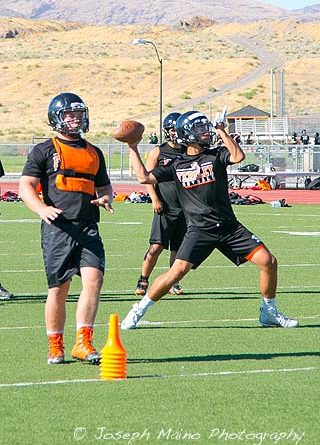 After working out all summer in triple digit heat, and then two weeks of hitting each other in practice, the Fernley High School football team has a chance to knock someone else around tonight.

The Vaqueros will scrimmage tonight at Douglas High School in Minden against Douglas and Hug, a pair of 4A schools.

The freshman and JV teams will scrimmage at 6 p.m., followed by the varsity at 7:30 p.m.

Each team will run a series of plays on offense and defense against both other teams.

Coach Chris Ward said several positions on both offense and defense are up for grabs for the varsity squad, and the scrimmage will go a long way to deciding which players will earn starting spots.

“We want to find out those kids that are going to play hard, even tired they’re going to be playing hard,” Ward said. “We tell our kids all the time we can fix mistakes, like if you’re blocking the wrong person, but effort and intensity, that’s hard to fix and that’s what we’re looking for, kids that play with intensity.”

Quarterback is one position up for grabs, with senior Ren Arroyo and junior Zach Burns battling for that spot. Ward said both throw the ball very well, and their skill sets have promoted him to tweak the team’s option offense a little bit. Neither runs as well as last year’s quarterback, Kyle Throckmorton, so Ward has added some new concepts into the passing game to try to take advantage.

Ward said the Vaqueros won’t get too deep into their playbook in the scrimmage, instead running just a few basic plays.

“We want to make sure that we’ve got our bread and butter for the scrimmage,” Ward said. “We want to see how well we execute on our base stuff. But the biggest thing is we want to be able to play hard and fast.”