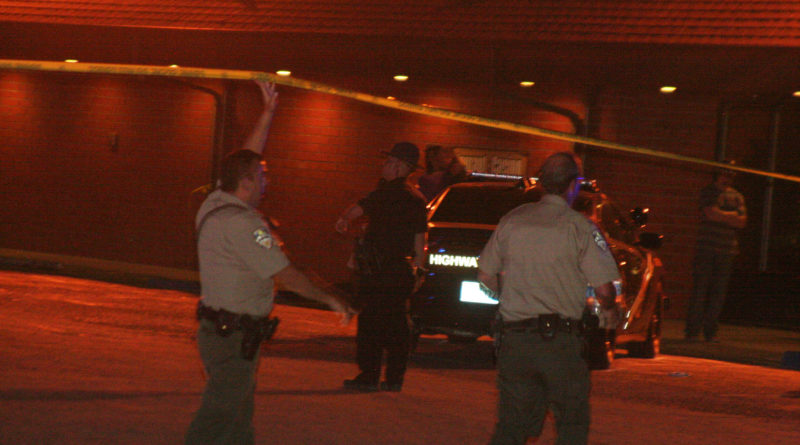 The victim who was shot during the attempted robbery at the Wigwam Restaurant and Casino Thursday night has been released from the hospital, and the Lyon County Sheriff’s Office said the two suspects are still at large.

Lyon County Sheriff Al McNeil said Friday said a customer was shot during the robbery attempt, and at least one of the suspects exchanged gunfire with a Nevada Highway Patrol trooper as they made their getaway.

The robbery occurred around 10:30 p.m. when two suspects wearing dark clothing and masks entered the restaurant. No additional description of the suspects has been provided, other than they left the scene in a dark sedan.

McNeil said an NHP trooper saw one of the suspects running out of the Wigwam with a firearm and followed the vehicle into a residential neighborhood, where the suspect fired at him.

“The trooper had to back off due to protocol, and he lost them,” McNeil said.

Secret Witness is offering a $2,000 reward for information leading to the arrest and prosecution of the suspects.

McNeil said LCSO is using all of the resources available, including its state law enforcement partners, and will include federal resources if necessary, in the investigation.

“We will bring in every resource we have available to hunt down these cowards,” McNeil said. “I call them cowards because they came in wearing masks, then they go out and fire shots in my community, in a residential area, and who knows where those bullets can end up?

“I’ve got real issues with that, and we will put every resource available to us to catch them,” he continued.

McNeil said the victim who was shot was treated and released from the hospital fairly quickly.

“We thought initially the injuries were more serious,” he said.

A second person, the night manager of the restaurant, was hospitalized because of what McNeil termed a medical event.

McNeil said he is frustrated by misinformation circulating in the community about the incident.

“Nobody has died, nobody is at risk of dying, and nobody has been arrested,” he said. “But as soon as we get the video stills from the surveillance system, we will get those out to the public.”