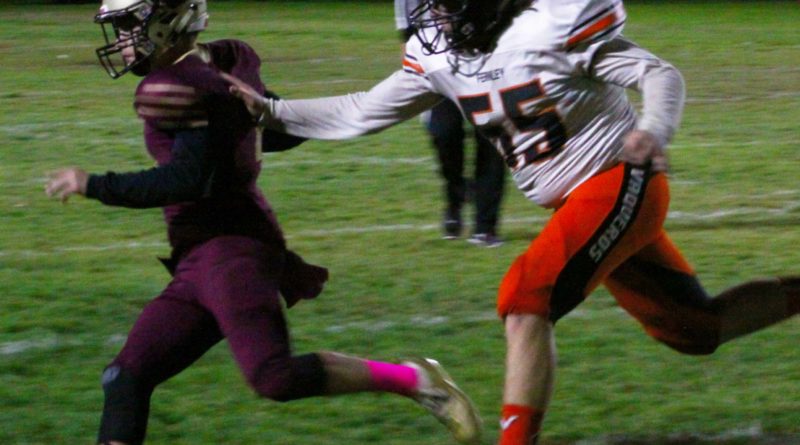 Growing up in Montana, Fernley football coach Chris Ward remembers seeing time and again how visiting teams facing Montana and Montana State in the playoffs of what was then called the NCAA Division I-AA would shrivel up in the cold and wind up getting blown out.

As cold as it can be everywhere across Northern Nevada, that’s a concern that Northern 3A coaches have had about visiting Spring Creek, particularly in late-season games, since the school opened in the mid 1990s.

And while it wasn’t necessarily the cold that was on his mind, making sure the Vaqueros are in the right frame of mind for Friday’s trip to Spring Creek was one of the first things Ward mentioned when he addressed his team after last Friday’s 57-14 win at Sparks.

“Get your minds right for that trip,” Ward told the team in the postgame huddle.

Afterward, he expanded on that thought, fondly recalling times the Grizzlies and Bobcats ran all over their frozen foes.

“That’s half the battle going to Spring Creek, is that bus trip,” Ward said. “It’s like going up to Montana during the playoff times. You get those Southern schools that go into Montana and the weather beats them before they even step out on the field.”

The Vaqueros, however, have had their share of success against Spring Creek, going 5-2 against the Spartans since 2012, including beating the Spartans 28-21 last year and winning 32-22 in their last trip to Spring Creek in 2017.

Despite that success, Ward says the Spartans are one of the most difficult teams to prepare for, in large part because in the past, the Spartans have defended the Vaqueros flexbone offense in vastly different alignments than their typical base defense Ward sees on film.

“They’ve done that in the past, where sometimes they show an even front and then they come out and they’re playing an odd front,” he said.

That means Fernley’s offensive linemen have to be aware of where the defender they are assigned to is, and make sure they don’t block the read man, and worse, leave another defender unblocked.

“That will be a good story, to see what happens with that,” Ward said.

The best story for the Vaqueros would be a win, in a defining matchup that will leave the winner in contention for the Northern 3A’s No. 2 playoff seed, which would mean a first-round bye and put them on the opposite side of the bracket from Fallon.

The Vaqueros are coming off a 57-14 win at Sparks last Friday, a game where they outscored the Railroaders 40-0 in the second half.

Sparks gashed the Vaqueros offensively with several big pass plays, and got the help of a couple of pass interference penalties, to control the ball for 42 plays in the first half.

The Vaqueros got only three possessions in the first half, scoring on two of them, plus a 95-yard kickoff return for a touchdown.

Fernley opened the game with a 62-yard drive in just four plays, the last a 12-yard touchdown run by Miles Steele, who leads the Northern 3A with 13 rushing touchdowns.

On their second drive, the Vaqueros moved 39 yards in seven plays to take a 10-0 lead on a 34-yard field goal by Jack Knodell.

Sparks went on an 11-play, 76-yard drive to get within 10-7 on a 27-yard touchdown pass from Tyler Green to Cole Meacham.

Kyle Jones returned the ensuing kickoff 95 yards to make it 17-7, but after an unsuccessful onside kick, Sparks answered back with a 2-yard touchdown run by Ben Castens to cut the lead to 17-14.

The Railroaders then recovered their own onside kick, but came up empty after a 11-play drive on a missed 47-yard field goal attempt.

The second half was all Fernley. The Vaqueros scored touchdowns on all six of their second half possessions, while the defense held the Railroaders to just one first down, which came when Green scrambled away from a sack and ran for 22 yards.

Fernley went up 24-14 when Lonnie Halterman scored on an option pitch on fourth-and-goal from the 4 with 7:37 left in the third quarter. Brandon Reyes went 28 yards for a score on Fernley’s next drive to make it 31-14 with 5:35 left in the quarter, and exactly two minutes later, Reyes ran 57 yards for another touchdown and a 38-14 lead.

Steele and Reyes each added one more touchdown run, and David Sisneros scored a 3-yard touchdown run on what turned out to be the last play of the game, because with a running clock under Nevada’s mercy rule, time ran out without the Vaqueros having to attempt the extra point.

While the Vaqueros were unstoppable offensively all night, Ward said it took a half for the defense to get settled.

“The defense, I don’t know if they got embarrassed, but after that first half they realized that’s not how they play football and they got back to playing football the way they do,” Ward said.

With the trip to Spring Creek on tap this week, Ward said it was important for the Vaqueros to play well last week.

“We wanted to execute really well, then we can polish up some stuff next week,” he said. “I think we’re almost there.”