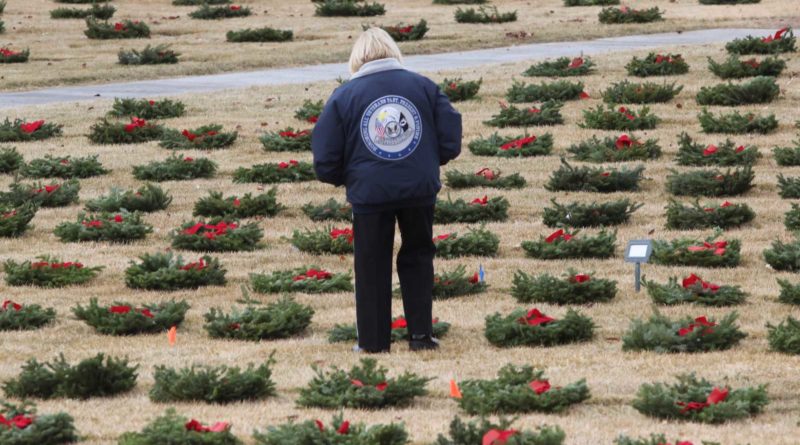 FERNLEY — The Nevada Veterans Coalition is seeking donations for this year’s Wreaths Across America remembrance, which will be conducted at the Northern Nevada Veterans Memorial Cemetery in Fernley on Dec. 14.

The NNVMC is one of two state veterans’ cemeteries. The other is located in Boulder City.

Normally held on the third Saturday of December, NVC President Brett Palmer said this year’s remembrance has been moved up one weekend because of the closeness of the Christmas holiday to the following weekend. Every year, Palmer said the NVC seeks donations to buy wreaths for the 8,000 veterans who are interred at the cemetery. He said the cemetery adds upward to 400 veterans who died during the calendar year.

“We average about eight services a week,” Palmer said.

That figure also includes the unaccompanied veterans’ services conducted once a month, and the Missing in Nevada service for unattended remains, which is held once a quarter.

Palmer said the NVC is nearing about 40 percent of its goal. Greater Nevada Credit Union recently presented the NVC with a $1,000 check.

Palmer said NNVMC hosts the largest Wreaths Across America remembrance in Northern Nevada. On the day of the solemn ceremony, which begins at the NNVMC at 9 a.m., Palmer said various groups in the United States and at overseas American cemeteries start the service at the same time. Palmer said the 9 a.m. time in the West coincides with the ceremony at noon at the Arlington National Ceremony that’s located across the Potomac River from Washington, D.C.

“The same speech is read at the same time,” Palmer pointed out. “This is a sign of unity for the country.”

The wreaths are placed at each veteran’s headstone or along the columbarium each year through the work of organizations and the public who wish to attend.

During the 2018 remembrance, Palmer said more than 1,400 people from western Nevada attended the event. Only the Memorial Day remembrance attracts more visitors, and Palmer said that number hovers around 3,000.

“People who were born in every community of the state are buried here at the cemetery,” Palmer added.

Volunteers from Naval Air Station Fallon, the Nevada National Guard, U.S. Naval Sea Cadet Corps and the Civil Air Patrol assist the NVC during the ceremony and with the placement of wreaths. A cadet from one of the two youth groups accompanies a veteran from a branch of service that’s being recognized, and then helps with the placement of a remembrance wreath at a medallion near the pavilion.

For the NNVMC ceremony, order a wreath by going to nnvc.org and click on Wreaths Across America for the pdf form, or mail your donation to: