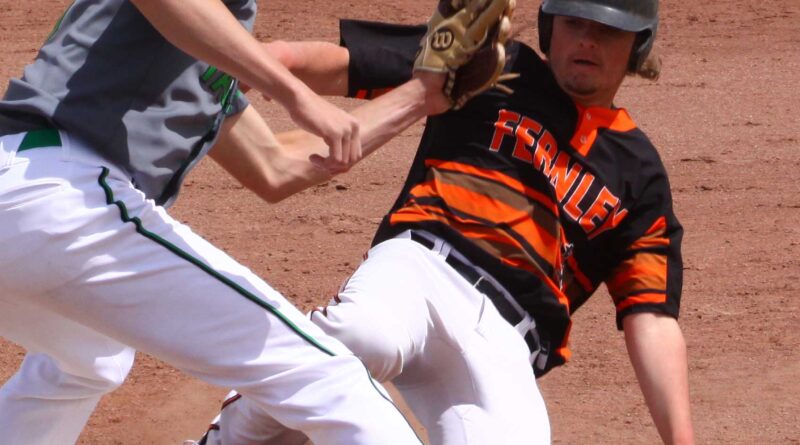 An offense than had managed just eight runs through its first four games came alive in a big way Saturday as the Fernley Vaqueros swept a doubleheader from the Fallon Greenwave 11-6 and 19-11.

One big inning turned the tide in Saturday’s first game, and maybe for the season.

A two-run single by Bryce Adams in the top of the third broke a 2-2 tie and put the Greenwave up 4-2, but an inning later, the Fernley offense finally found its ignition switch. Kyle Jones hit a ground rule double to left-center field that scored two runs to tie the game, and two batters later Levi Jessop got a fly ball just beyond the reach of the Fallon right fielder to drive in two more, then he came home on a single by Austin Pryor for a 7-4 lead.

The Vaqueros might have gotten more, but had a runner thrown out trying to get to third just before the double by Jones. They missed another chance to add on when they left the bases loaded in the fifth inning.

In the top of the sixth, Avery Strasdin sent Brady Alves home with an infield single and Matthew Davis scored on a fielder’s choice, but the Greenwave also left the bases loaded with a chance to regain the lead.

Alves was 3-for-4 to lead Fallon, while Tyler Austin and Adams both drove in two runs.

Austin Hobson gave Fernley some breathing room when his pop fly to center field eluded the Fernley defense and dropped in to score Pryor and Gamsby to put the Vaqueros ahead 14-11. Then in the bottom of the sixth, the Vaqueros scored four times to seal it.

Jones scored on an error, followed by a run-scoring single by Jessop. Gamsby followed with his own RBI-single, and the final run scored on another error.

Fernley started the game with a four-run rally in the first inning, getting RBI-singles by Tucker Hall and Justin Reeves, a run-scoring ground out by Jessop and an RBI-double by Bigrigg.

Fallon stormed back, getting three runs in the third, keyed by a three-run double by Strasdin and an RBI-single by Damien Towne.

In the fourth, Strasdin and Towne each singled in a run and Adams singled in two as Fallon got within 11-9.

It was 12-9 in the fifth when Fallon scored twice more, on a balk and a groundout by Stasdin that scored a run to make it 12-11.

Alves was 3-for-4 and scored three runs for Fallon, while Strasdin was 2-for-4 and drove in five.

For Fernley, Hall was 3-for-4 with two RBI and scored three runs, while Jessop drove in four runs and Reeves drove in three.