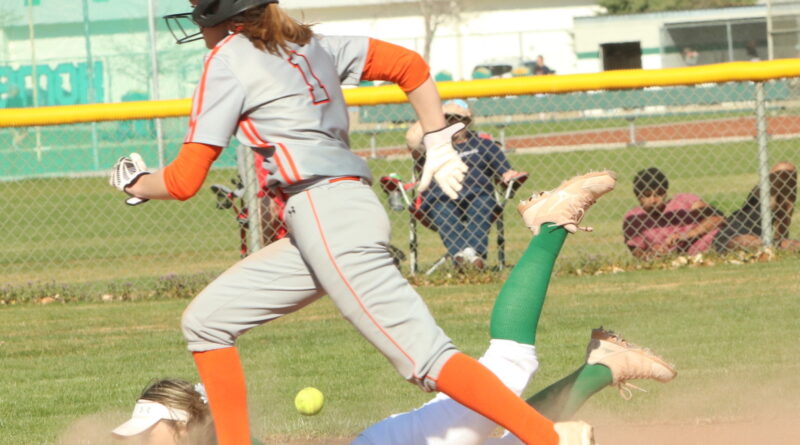 With no state tournament to be competed this season, the stakes may not quite have been the same when Fernley and Fallon renewed the 3A’s preeminent rivalry with three games this past week, they have been the past several seasons.

But boiled down to its essence, it was still Fernley and Fallon.

“It was up to the end of the first game (Saturday),” coach Diane Chapin said. “It would have been better if we just went straight into the second game, instead of a 20-30 minute break.”

When the dust cleared, literally, it was the Vaqueros taking the series winning two of three games, taking the opener 14-12 last Wednesday and splitting Saturday’s doubleheader, with a 21-20 win in the first game and a 17-5 loss in the finale.

After playing just 10 and a half innings over three blowout wins over Dayton the previous week to open the season, Chapin said she was glad for the Vaqueros to be challenged.

“The first weekend we did not get tested,” she said.

In Saturday’s first game, the two teams put on an offensive display in a strong windstorm. The teams combined to score in 12 of 14 turns at bat, with a total of nine doubles and five home runs among 34 total hits.

Braelyn Birkel had three hits and three walks in six plate appearances, scoring five runs and driving in three. Five other Vaqueros drove in two runs each, and every player in the lineup had at least one hit.

For Fallon, Savana Manha had four hits, including a pair of two-run homers, and drove in nine runs. Lydia Bergman also homered and drove in three runs, while Shaylee Fagg and Rachel Mori each had three hits.

An infield hit by Ashlynn Roemer scored Birkle with the winning run for the Vaqueros.

The game featured several wild momentum swings. Fallon led by seven runs after the top of the first inning, but trailed by six after Fernley scored nine times in the bottom of the fourth for a 20-14 advantage. In that inning, Roemer had an RBI-single, Mackenzie Viehland doubled in a run, then Kacie Harer followed with an RBI-single to tie the game at 14. Josephine Youngs put Fernley up 16-14 with a two-run double, Mikaela Miller made it 18-14 with a single on a pop fly that eluded Fallon’s infield, and Birkle capped the rally with a two-run homer to center field.

Fallon had scored seven times in the first inning, starting with a 3-run double by Manha, an RBI-double by Fagg, a run scoring single by Reece Hutchings and a two-run double by Mori.

Fallon scored once in the top of the second to lead 8-3, but Mackenzie Depaoli had a two-run homer and an RBI-single as Fernley came back with seven runs in the bottom of the second.

The game was tied at 11 after three innings. After Fernley’s 9-run fourth, Fallon scored a run in the fifth, three in the sixth and two in the seventh to tie the game, before Roemer’s hit won it.

Birkle finished a perfect offensive day at the plate with four hits and three runs batted in, but she accounted for half of Fernley’s eight hits in the game.

Meanwhile, Manha and Bergman both homered for the Greenwave, while Mori had four hits and scored four times and also was the winning pitcher. Bergman was 3-for-5 with five RBI and Manha drove in three runs.

Fallon scored four times in the first inning, with run scoring doubles by Fagg, Trinity Helton and Hutchings. Leading 4-2, the Greenwave got four more in the fourth, keyed by an RBI-double by Bergman and a 2-run homer by Manha.

Fallon added three in the fifth and six in the sixth, and needing four runs in the bottom of the sixth to keep the game going, Fernley scored once.

Having played just one series last season before the COVID-19 shutdown, this season is the first meaningful action in nearly two years for many players. On top of that, the Vaqueros have only four seniors, so many of their players haven’t yet experienced much varsity competition.

“Some of our gals aren’t that experienced at the varsity level and in those kind of games,” Chapin said. “And for quite a few of them it’s their first sport in a year.”

Even though this season is being shortened and there won’t be a state tournament, there will be a regional championship, so Chapin said she is approaching the season as she would any other, hoping to build to a strong finish, to compete for the region championship and carry over to next season.

She said the team is also fighting the perception many people have, including some students who have elected not to compete in sports this year, that these short seasons don’t matter.

“We have to change that mindset because, yeah, it does matter because we lost last season,” Chapin said.

Fernley banged out 18 hits and never trailed in the game to defeat Fallon 14-12 in a Northern 3A East softball game played at the Edward Arcineiga Athletic Complex.

Both teams resume play on Saturday in Fernley for a doubleheader that begins at 11 a.m.

The Lady Vaqueros scored three runs in the top of the first inning to set the stage in the game played by longtime rivals. Mackenzie Viehland, who also picked up the win, doubled  in Fernley’s first two runs, and Kacie Harer followed with a single to drive in a run. Harer had four hits and batted in four runs.

The Vaqueros continued its offensive power in the next inning with Viehland and Braelyn Birkle each stealing home, and Aschlynn Roemer scoring on a passed ball.

Fernley added a pair of runs in fourth inning on Harer’s fly ball single. The Vaqueros built on their 8-3 lead by tagging Fallon with four more runs in the fifth inning.

Braelyn Birkle doubled with one out. Mackenzie Depaoli followed with a double that scored two runs. After another out, Harer singled to right field to score a pair of runs.

The Wave cut Fernley’s lead in the bottom with a big fifth inning.

Bergman, who had three hits in the game, doubled, and Savana Manha’s hard infield single scored Bergman. Trinity Helton’s base hit cut the lead to 12-5. With the bases loaded, Shaylee Fagg scored when Shaylee Coldwell received a free ticket to first on a walk.

Fallon took advantage of a catcher’s interference, and Emily Clyburn reached first to score Helton. The Wave scored a pair of runs when Rachel Mori was hit by a pitch, and Bergman’s ground out accounted for Fallon’s tenth run.

A quiet sixth inning for both teams ensued, but each team scored twice in the seventh inning.

Mikaela Miller not only singled in a run, but she also swiped home two batters later.

Helton took the loss for Fallon, which is 1-3 overall, and Fernley improves to 4-0.