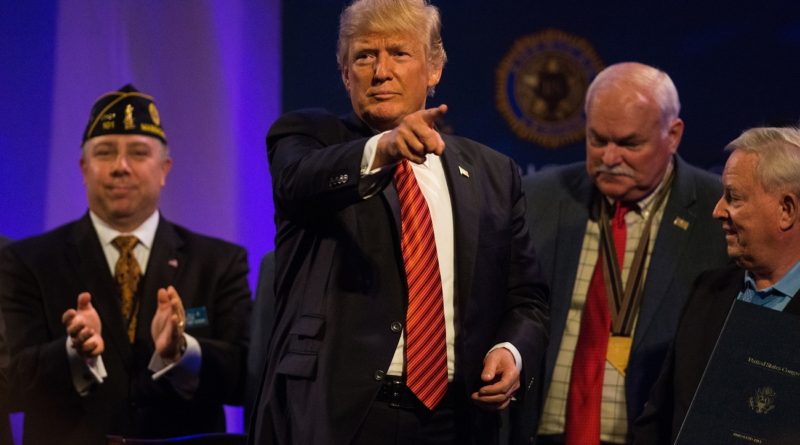 President Donald Trump stuck to his script Wednesday at the American Legion’s annual conference in Reno, promising a brighter future for veterans in a short, relatively subdued speech that stood in stark contrast to an address he gave at a raucous campaign rally in Phoenix a little more than 12 hours earlier.

Trump, who just last week veered off topic while signing a veterans bill to address the violent, racially charged protests by white supremacists and neo-Nazis in Charlottesville, zeroed in on veterans during the roughly 30-minute speech before roughly 5,100 members of the veterans organization at the Reno-Sparks Convention Center.

The president recalled promising the group last year that he would fix the “broken” VA system and outlined the several pieces of legislation he has signed so far as president, from a bill funding a program to continue to allow veterans access to private health care to one increasing accountability within the system itself.

“One year ago at this gathering — and remember so many of these so well — I promised I would make it my priority to fix the broken VA and deliver our veterans the care they so richly deserve,” Trump said, pointing to the VA’s decision to be more transparent and publish wait times online as one example of how he had improved the system.

At the event, Trump signed another veterans-focused bill modifying the appeals process for benefit claims at the Department of Veterans Affairs to address the steadily growing number of backlogged claims in the system. The Veterans Appeals Improvement and Modernization Act, sponsored by Republican Rep. Mike Bost of Illinois and co-sponsored by Nevada Democratic Rep. Dina Titus, passed both the House and Senate with unanimous support.

“The legion, I have to say, pressed so hard for that legislation, so I want to thank you very much,” Trump said.

The number of backlogged claims has grown to 470,000 vets since 2014 and was expected to reach two million within the next 10 years with wait times estimated to be a decade long. In Nevada, 2,500 veterans have pending appeals, up from 1,500 in 2014, with an average wait time of more than three years.

The bill is based on the VA Appeals Modernization Act of 2016, which was authored by Titus when she was ranking member of the the House Veterans Affairs Committee’s Subcommittee on Disability Assistance and Memorial Affairs. Titus applauded the legislation signed by the president as a “result of hard work, collaboration, cooperation and creativity” to address the problems of a “snarled system.”

“Having led the effort to reform the VA appeals process for more than four years, I am pleased that this legislation I introduced last year will finally become law,” Titus said in a statement. “Now we must work to ensure that it is quickly and carefully implemented by the VA and the VSOs.”

Republican Sen. Dean Heller has also championed the bill, and called the signing a “win for Nevada’s warriors.”

“Those who have made sacrifices on behalf of our nation should not have to jump through hoops when it comes to accessing the benefits that they’ve earned,” he said in a statement. “Over the last few months we’ve been able to make real progress on behalf of the veteran community.”

Implementing the changes to the appeals process is expected to take about 18 months from when Trump signs the measure.

The hour and 23 minute visit between arrival and departure Wednesday marked Trump’s first trip to the Silver State since taking office and, also, since losing the state by about two-and-a-half points, or a little more than 27,000 votes, to Democratic presidential nominee Hillary Clinton. The president has typically visited states that voted for him in the November election since he took office in January. Nevada is 19th state Trump has visited as president, and the farthest west.

The speech came a little more than twelve hours after Trump’s campaign appearance in Phoenix, Ariz., where the president floated the idea of pardoning controversial former Maricopa County Sheriff Joe Arpairo and indirectly attacked the state’s two moderate Republican senators — Jeff Flake and John McCain. A peaceful protest of Trump’s speech in Phoenix took a turn for the worse when police officers used tear gas to manage the crowd of thousands.

Outside, roughly 1,000 peaceful demonstrators both supportive of Trump and critical of the president carried on without much incident, in stark contrast to images out of Phoenix and Charlottesville, which have spoken to the fractured nature of an electorate deeply divided over their opinions of the president.

Several hundred people gathered outside the Reno-Sparks Convention Center Wednesday morning, with the clear majority there to protest the president and several dozen Trump supporters on hand too.

Margo Memmott, a Reno-based archaeologist, came holding a sign declaring that support for diversity was a prerequisite for supporting the troops and said she was perturbed by the Trump administration’s proposed ban on transgender soldiers.

But she said her main priority was to indicate to Trump supporters — especially her father, a veteran — that those protesting the president weren’t radical “alt-left” protestors but, rather, ordinary people.

“He’s like my barometer,” she said. “I love him so much, and I want my dad to understand that I’m here because I love our country, not the opposite.”

Michael Cowles, who served in Iraq between 2000 and 2005 as a Marine cryptologic linguist and Arabic translator, said he wasn’t necessarily opposed to the president’s attempts to improve veteran’s services but was more concerned with issues such as the ongoing “racial divide” in the country. Cowles said he wanted to wait and see what sort of policies Trump — who criticized American involvement in overseas conflicts during the campaign but recently pledged to increase troop levels in Afghanistan — would pursue in the rest of his time in office.

“The proof of the pudding is in the eating,” he said. “I need to see evidence that things are going in the right direction.”

Reno Police Department Chief Jason Soto told KRNV that no arrests were made during the protest.

Trump joins a long list of incumbent presidents who have addressed the veterans group at their national convention, including Presidents Bill Clinton, George W. Bush and Barack Obama. Calvin Coolidge was the first president to attend the group’s convention in 1925.

Department of Veterans Affairs David Shulkin and Housing and Urban Affairs Secretary Ben Carson, who rode with the president on Air Force One, attended the president’s address.

The president was greeted at the airport by a cadre of Nevada elected officials, including Gov. Brian Sandoval, Attorney General Adam Laxalt, Washoe County Commissioner Bob Lucey and freshman Assemblyman Jim Marchant. Reno Mayor Hillary Schieve declined to welcome the president in person, saying she had city council business at the same time on Wednesday.

The governor rode with Trump to the American Legion event, discussing the health of the nation, the state’s economic recovery, veterans issues and Sandoval’s role as chairman of the National Governors Association.

“Governor Sandoval was graciously invited to ride to the American Legion event by President Trump when he greeted him on the tarmac,” Sandoval’s office said in a statement. “The Governor is grateful that the President traveled to the great state of Nevada to address the American Legion and honor our nation’s veterans.”

Republican Sen. Dean Heller was expected to attend the Wednesday event but did not appear on stage with Trump.

Businessman Danny Tarkanian, who is challenging Heller in the Republican U.S. Senate primary, also did not attend the event, saying that he was staying home with his sick son. Tarkanian and his wife, Amy Tarkanian both made appearances on cable news networks early Wednesday morning.

One thought on “Trump stays on message, promises brighter future for veterans in American Legion address”