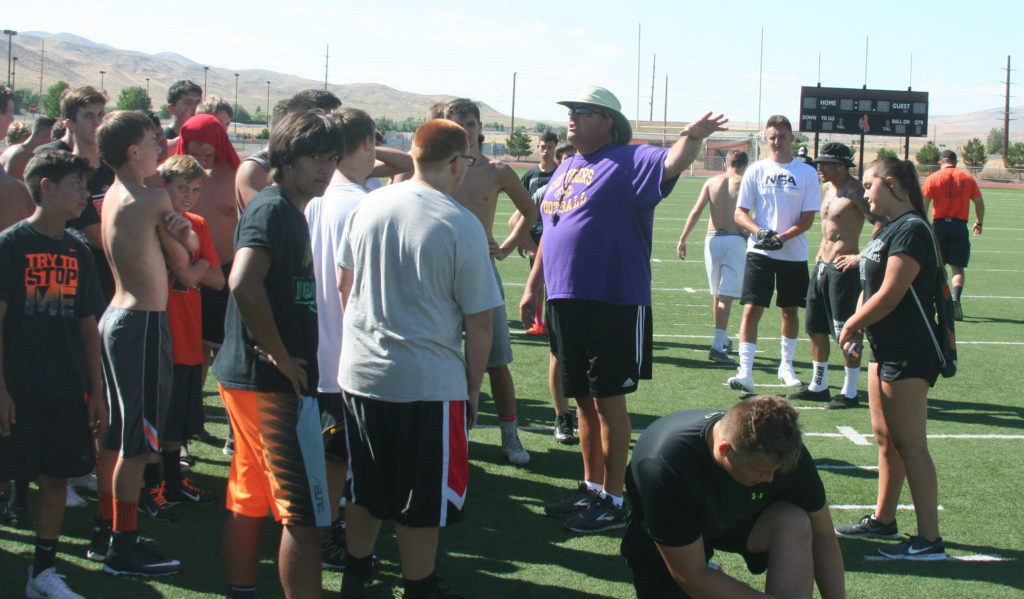 Gathering on the field in a steady rain after their first-round playoff loss at South Tahoe last October, many of the thoughts of the Fernley High School football players and coaches were about what might have been.

A season that began with hopes of being one of the top teams in the Northern 3A collapsed under an avalanche of turnovers that cost the Vaqueros at least two winnable games. The Vaqueros instead finished the season with a 4-6 record and a first-round playoff loss for the sixth consecutive season.

As they prepare to open the season Friday night against Sacred Heart Cathedral Preparatory at Kezar Stadium in San Francisco, the Vaqueros are ready to embark on a season of atonement.

“We had high hopes last year and it didn’t turn out the way we wanted,” coach Chris Ward said. “This year is our chance to do something about that.”

The Vaqueros will open the season against Sacred Heart, which finished 2-8 last season and 1-6 in the West Catholic League. Even so, Ward is expecting the Fightin’ Irish to be a formidable opponent.

“They may have been 2-8, but you don’t know the quality of their league,” he said.

“They run all spread sets with trio and 2-by-2 formations,” Ward said. “But if you empty out the box to defend that, they’ll run it at you.”
Defensively, Ward said Sacred Heart plays a 3-3 stack formation with a lot of blitzing.

In addition to playing an unfamiliar opponent, the Vaqueros will also have to deal with the new experience of playing in a stadium. Kezar Stadium, located at Golden Gate Park, was the original home of the San Francisco 49ers. It originally held more than 59,000, but was renovated in 1990 and now seats 10,000.

“It will be a great experience for our kids, the travel, playing a school like that, and in the original home of the 49ers,” Ward said.

After playing the game Friday night, Ward said the Vaqueros will stay the night in Vallejo and go to Six Flags Discovery Kingdom Saturday morning, before returning home.

“I don’t know how many of our kids get out of the Fernley area,” Ward said. “We have kids who’ve never been own to Las Vegas, never been to San Francisco, so it’s a great experience for our kids.”

The Vaqueros hosted a scrimmage last Friday against Dayton and Yerington. The varsity and freshman teams scrimmaged against Dayton, while the JV team faced off with the Yerington varsity.

Ward said they got in about 60 or 70 plays combined, not enough to make definitive evaluations, but enough to get in a little contact.

“We got a little taste, and hopefully it gets everyone excited about playing,” Ward said.

Despite losing several key players who graduated from last year’s team, the Vaqueros return an experienced roster, and add several players from the JV team that went 8-1 last year.

Senior quarterback Zach Burns returns after passing for 978 yards with 7 touchdowns and 13 interceptions, and rushing for 568 and 10 touchdowns last year. He will be backed up by junior Cooper Henderson, who will also be one of several players playing in the slot positions.

Willy Pritchard returns at fullback, where he ran for 605 yards and 6 touchdowns last season, and he’ll be backed up by Shawn Gleason.

Aaron Proctor, Jordan Presley, A.J. Kuha and Henderson will rotate at the slot positions, while the Vaqueros have good size and depth at their X and Z receiver positions.

“They’re all quality athletes who catch the ball well,” he said.

On the offensive line, center Hunter Bard has a sprained knee, and Ward said the coaches are still deciding what to do with that position. Gabe Richards is currently playing there in practice and in Friday’s scrimmage.

“He’s probably our best center, but he also plays middle linebacker, and that’s a lot of contact,” Ward said. “He can handle it, but we’d rather play him at other positions.”

Lonnie Slapinski is slated to be the right guard with Delson Williams at left guard. Garrison Harjo and Noah Osterman are tackles. Harry McDonald is dealing with a hamstring strain but Ward said he will find a home at guard or center.

“He’s going to be real good on the tight end side,” Ward said

Slapinski and Kordell Sloan will be the defensive tackles. At linebacker, Richards and Osterman will line up inside, with Bertok and Presley outside.

In the secondary, Ward said Proctor is a rangy free safety, Tyler Dennis is a returning all-league cornerback, and Terra and Armando Rios will play the other corner.

Ward has three new assistant coaches this season. Sean Ceccone, who was the offensive coordinator last year, Gary Stone, who was the head JV coach, and freshman coach Todd Buchan have each left the program.

Eddie Martin, who was a new assistant last year and who played quarterback at Navy, is the new offensive coordinator. He was extensively involved with the offense last year and is intricately familiar with the triple option offense the Vaqueros run.

Despite opening the season a week earlier this year, Ward said the Vaqueros have actually had more practices, because the team was able to have two-a-days because school is starting two weeks later this year.

“We’ll have twice as many practices before the first game,” he said.

Overall, Ward is optimistic about the season.

“On paper we’re pretty good, but like I tell the kids, paper doesn’t win any games,” Ward said. “Potentially we could be pretty good.”