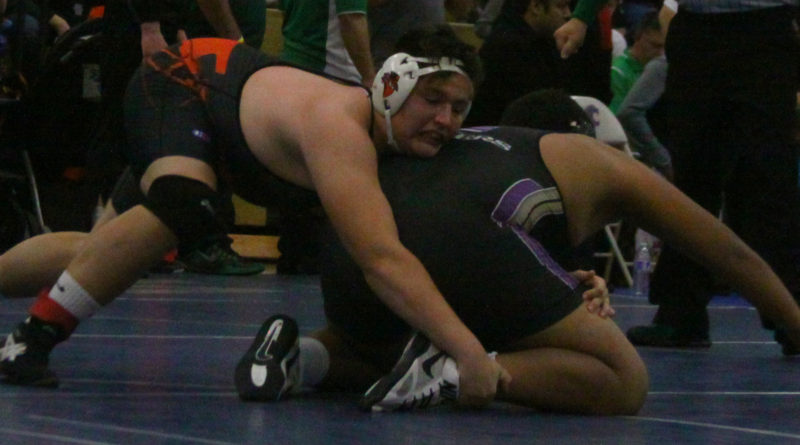 Slapinski finished third in the heavyweight division in this weekend’s NIAA 3A State Championships at Spanish Springs, capping a turnaround season one of two state medalists for the Vaqueros.

A.C. Reyes, meanwhile, overcame a knee injury that caused him to sit out several weeks this season to finish fourth at 182 pounds, while Jared Caulk capped his sophomore season with a state tournament appearance at 113 pounds and won one match, falling just short of qualifying for a medal.

With only three wrestlers qualifying, the Vaqueros had no chance at winning the team title, finishing 12th with 21 points, out of 18 teams that scored points. Spring Creek was the team champion with 135 points, narrowly beating Fallon, which was second with 132.

Slapinski scored a takedown with 2 seconds left in the consolation final to win a 3-1 decision over Michael Kaposta of Boulder City.

“I saw that he was giving me pressure so I tried to snap down and try my luck,” Slapinski said.

Slapinski had pinned Kaposta in 5:10 in the first round, but the match was tied 1-1 at the time, so Slapinski said he knew the third place match would be a close one. In the semifinals, Luis Salazar of Elko pinned Slapinski in 28 seconds, sending him into the consolation semifinals. There, he won a 3-1 decision over Jose Lara of Sunrise Mountain in a similar match to the consolation final, scoring the winning points on a late third-period takedown.

It was the first time in his career Slapinski, a junior, had qualified for state. He finished fifth at the North Region tournament as a sophomore last year, finishing the season with a 17-30 record. But before the season, Slapinski had told coach Scott Gillespie he wasn’t going to wrestle anymore.

“He said he didn’t like it anymore because he didn’t’ think he was very good,” Gillespie said. “We had to convince him he could be phenomenal, then he did real well last year. Now he’s a captain of the team and I see him getting better and better.”

Slapinski said he dedicated himself to getting stronger in the weight room and improving his quickness. Weighing 235 pounds, Slapinski considered cutting weight to wrestle at 220 pounds instead of heavyweight, but ultimately decided to stay at heavyweight, and he wound up this season with a 39-14 record. Even so, he said he was thrilled just to have qualified for the State Meet.

“I was really excited, especially how much I improved from last year,” he said. “I was just happy I got here. But the guys who got the two places in front of me are seniors, so next year I’m going to be going for gold.”

Reyes was hampered much of the season by a dislocated kneecap that caused him to miss several weeks of action. He was leading Chase Hyde of Fallon 3-2 with 39 seconds left in a consolation semifinal match when it popped out of place again. Reyes lay on the mat in agony for several seconds and was allowed two minutes of stoppage time while he was tended to by his coaches and an on-site trainer. Reyes decided he could continue the match, and actually scored two takedowns in the final seconds as Hyde desperately tried to attack.

“All of high school, I had never lost to a Fallon kid, so I had to finish,” Reyes said. “I knew he was going to go after my knee so I was trying to play defense, but I already had a stalling call.”

Just like last season, Reyes scored the first points, but had a tough time against the lanky Burnside, who pinned Reyes in 3:15.

Like Slapinski, Reyes’ third place match was a rematch of his first round match, in which Burnside pinned Reyes in 2:47. He came back in the consolation bracket to pin Eric Moreno of Sunrise Mountain in 1:41 before beating Hyde to reach the third place match.

Considering all the time he missed this season, Reyes said he was happy to place fourth at State.

“I’m just proud to make it all my way through the season, and I’m just proud of my team,” Reyes said. “They’re all at practice to help out and they’re all here watching.”

Reyes is one of just two seniors who finished the season for the Vaqueros, and the only senior out of his freshman class to stick it out through all four years of wrestling.

“I’m the only one in the room whose been there all four years and I’m just glad to have that group of guys finish it out with me,” he said,

Caulk, a sophomore, lost his first round match by a 12-0 decision to Garrett Leavitt of Boulder City. In the first consolation round he beat Dominic Mota of Mojave, 4-3, before being pinned in 4:32 by Riley Fuchs of Spring Creek the consolation semifinal match.

“It was a new experience, the biggest tournament I’ve been to in a long time,” Caulk said. “To win a state match is an accomplishment, and to almost make the medals. I hope to come back next year and get a higher placing each time.”

“Jared’s in a super tough weight class too,” Gillespie said. “Him making it (to State) is a big deal and he’s another kid to look forward to next year. We’ve got a lot of Freshmen and sophomores coming back and next year’s we’ll be stronger.”