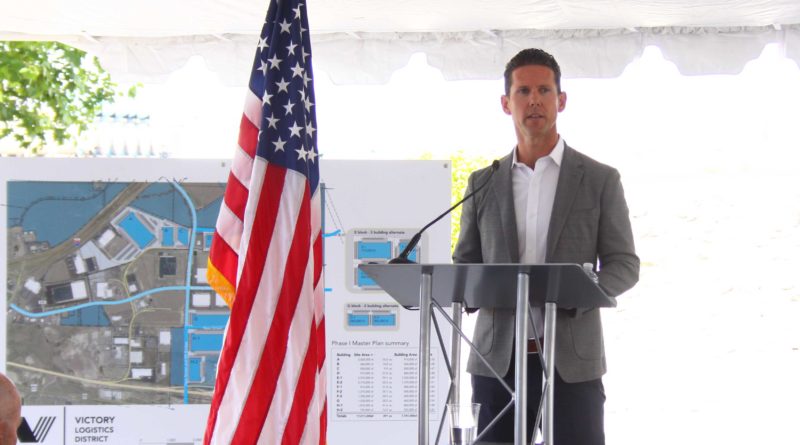 With new owners and a new name, there could be much more to come.

Mark IV Capital, Inc. held a press conference Tuesday to formally announce its purchase of the Crossroads Commerce Center, and its rebranding with the new name of the Victory Logistics District.

Soon to follow is an 800,000 square foot industrial space, with construction planned to begin in 2020.

That building will be a cross-dock distribution building with 40-foot clear heights that can be divisible into 200,000 square foot spaces if needed. The building is speculative, meaning it will not be designed and built for a specific tenant.

However, Mike Kazmierski, CEO and President of the Economic Development Authority of Western Nevada, said he doesn’t believe it will take long for that building and other sites in the Victory Logistics District to be filled.

Mark IV Capital purchased the 4,100 acres of the Crossroads Commerce Center for $45 million, as well as additional industrial land west of Fernley.

He said the project is exciting because of the property’s size and because of its location with access to U.S. 50, U.S. 95 and Interstate 80 and the future Interstate 11, as well as rail lines.

“An area like this that is so well located can really benefit, and we really do expect to have thousands of jobs brought in here,” Cate said.

Evan Slavik, Mark IV Capital’s President of Real Estate, estimated buildout of Phase I of the Victory Logistics District, which consists of the about 2,500 acres between Interstate 80 and U.S. 50A,  would take five to seven years.

Along with that, he said the master plan for the district also includes the connection of I-80 with U.S. 50A via Nevada Pacific Parkway, which was previously planned but never completed.

Slavik also announced a partnership with Black Gold Terminals to construct and operate a full-service trans load rail facility that he said would streamlines the supply chain and shipping for companies in the district.

“We’re well on our way to bringing significant commerce and job growth to the city of Fernley,” Slavik said.

Slavik downplayed the impact the first phase of development of the district would have on schools, traffic and other services, saying the plan is to attract workers who already live in Fernley.

“One of our hopes is that lot of people who work outside Fernley will switch jobs and reduce their commute,” he said.

City Manager Daphne Hooper said about 60 percent of the city’s workforce commutes out of the city.

“So we’re hoping it’s not necessarily going to impact in the beginning, because hopefully people will be able to get jobs where they live,” Hooper said.