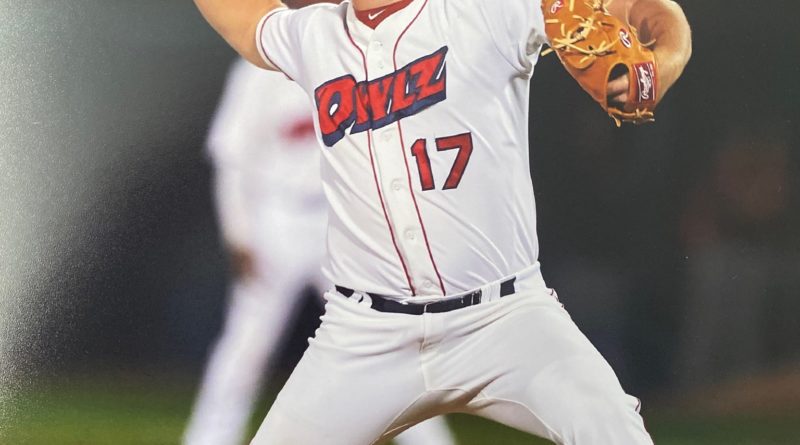 While Major League Baseball players and owners bicker about money and other issues related to how to start a season, the more lasting impacts of the loss of playing time due to COVID-19 are being felt by the minor league players who are losing a critical season of development as they try to reach the major leagues.

Fernley’s Shane Kelso might be the poster child for those players most affected.

Drafted in the 24th round last June by the Los Angeles Angels, Kelso, who will turn 23 in August, had an impressive enough professional debut last summer that it changed the organization’s perspective of him and his potential trajectory through the minor leagues.

“I’ve had conversations with coaches and I truly do believe the path I’m on, I have a legit shot at pitching in the big leagues,” he said. “I’m a raw product, but I have a three-year window where I think I can make good.”

A 2015 Fernley High School graduate, Kelso was drafted out of Oklahoma Baptist University, where he played two years after one year at Feather River College.

After being drafted last spring, Kelso was assigned to rookie ball with the Orem Owlz of the Pioneer League, where he appeared in 13 games as a relief pitcher and posted a 1.65 earned run average, allowing 12 hits, 25 strikeouts and 10 walks in 16 1/3 innings. About three weeks before the end of the season, he was promoted to Burlington (Iowa) of the Midwest League, the Angels’ low Class A affiliate. There he got into four games, allowing two hits and two runs while striking out nine and walking five with a 4.15 ERA in 4 1/3 innings.

More importantly for his future prospects, Kelso’s fastball registered as high as 99 miles per hour.

“I had made some significant improvements over the summer,” Kelso said.

His performance earned him an invitation to the Angels’ instructional fall league, where players go through eight-hour days of intensive hands-on training. In his exit interview with Angels’ staff before coming home for the winter, Kelso said he was told the organization had seen enough to change its perception of him.

“They didn’t expect me to have that kind of success,” Kelso said. “They said they saw me as a project when they drafted me.”

During his exit interview, Kelso was told the plan for this season was to move him from the bullpen into a starter’s role, and that he would be sent back to Burlington in Low A or assigned to the Angels’ High A affiliate at Inland Empire in the California League for his first full season of professional baseball.

“The main goal was going to be to get as many innings as I could,” Kelso said.

Kelso said he had a good feel for his fastball and slider, and as a reliever he could get by with just two pitches. However, one of the organization’s goals for him this season was going to be to get a feel for his changeup.

“For the vast majority of my life I’ve been able to overpower hitters, but at the pro level, guys see 95 and they laugh,” he said.

Kelso’s fastball sat between 89-91 miles per hour in high school, and gradually increased as he grew into his 6-foot-3 frame. He weighed 190 pounds during his senior year in high school, and now weights 250. As he got stronger, his fastball increased, to 93 MPH as a freshman at Feather River, finally reaching 97 to 98 in his two years at Oklahoma Baptist.

“It’s from lifting and just getting that grown man strength,” he said.

Kelso was an early invitee to spring training, and reported to the Angels’ Cactus League facility in Tempe, Ariz. on Feb. 18, working on building up arm strength with a regimen of work with a weighted ball, Jaeger Bands and lifting, on top of his throwing schedule.

But as spring training was ramping up, so were concerns about COVID-19, and on March 7, the Angels told their minor league players to go home. At first, Kelso thought the shutdown would be temporary, maybe two or three weeks, but March turned into April, and then into May.

“They gave us no feeling at all,” he said.

By then it was starting to look unlikely that there would be a minor league season, even if the major leagues played. Speculation throughout baseball was that instead of playing a regular season, Major League teams would assemble their minor league players at their spring training facilities in Florida and Arizona for a season of instructional camps, sort of like an extended spring training,

Kelso had come home to Fernley after spring training camps were closed, working at Lowes and following the workout and throwing regimen provided by the Angels’ minor league staff. He put up a makeshift net in his back yard to throw, and also throws with Sam Gamboa, a pitcher for the University of Nevada who also played at Feather River College.

But on May 20, Kelso got a call from one of his minor league instructors, letting him know the Angels were planning to furlough all of their minor league coaching staff starting June 1.

“So, the chances of any kind of minor league season are pretty slim,” Kelso said. “After that news, I don’t think that’s going to happen.”

A player in his situation, a mid to late round draft pick who isn’t on any top prospects lists, usually only has two or three years to prove himself worth keeping to a Major League organization, and possibly less with Major League teams talking about eliminating as many as 42 minor league franchises. Losing a season of development will prove to be the end of the dream for many minor league players. Kelso is determined not to be one of those.

“You’ll see a lot of guys fall off or get lost in the mix,” he said. “But I’ve been working on this goal for the last 15 to 20 years. This is not something I’m going to throw away.”

Still, no amont of throwing into a net, or playing catch, can make up for missed time on the mound, throwing to hitters with a game on the line.

Whether this COVID-19 shutdown is lifted in time for players to go to instructional leagues in the fall, or whether it lasts until spring training next year, Kelso is adamant that he isn’t going to let it derail the momentum he began with a strong summer last year. If he ends up never making it to the big leagues, it won’t be because of a lack of preparation, he says.

“I’ll play it by ear and I’ll be ready when they call me back,” he said. “I look forward to being that person who comes back ready to go.”

Shane Kelso stood on the baseline chalk during Opening Day ceremonies in Orem, Utah last June 14, wearing a professional baseball uniform for the first time. He looked up into the stands, and at his teammates lineup up along side him. The only word he can think of to describe it is “humbling.”

“I didn’t pitch, but its Opening Day, during the national anthem, a packed house, this is the real deal,” Kelso said. “I literally had no other emotion. I couldn’t believe I was standing there.”

After dreaming about it all his life, then being drafted by the Angels in the 24th round last June 5, Kelso began his first year in professional baseball, that ended with him spending the last three weeks in Burlington, Iowa, after being promoted from Rookie League to the Low Class A affiliate of the Los Angeles Angels.

Kelso was quickly indoctrinated into the life of minor league baseball – living with host families, long bus rides, low pay, but the realized dream of playing professionally, in communities that support their teams and take baseball seriously.

“I’ve gained respect for the game,” he said. “Not saying I didn’t respect it. You see just how hard it is.”

As a 24th round draft pick, Kelso received a $10,000 signing bonus, a plane ticket, and his final year of college paid for. During the season, he was paid $535 every two weeks.

In the lower levels of the minor leagues, most players live with host families. Those experiences can vary depend on the family. Some offer nothing more than a room to sleep in, while others provide meals and transportation.

“If we didn’t have those people, we’d be paying money to play ball,” Kelso said.

For Kelso’s first host family, in Orem, it was their first year hosting a player, but in Burlington, he stayed with a family that had hosted players for 15 years. In Orem he was able to take his own car because it was just a few hours drive from home, but in Iowa, the host family provided a car for him to use.

On the field, aside from the big jump in competition, Kelso said the biggest difference is the coaching.

“You’re not babied by the coaching staff,” he said. “If you’re told to do something, you’re expected to do it, nobody comes to hold your hand.”

Off the field, Kelso enjoyed seeing most of the rest of the country. Over the nine-month period from the start of his last college season to the end of the season in Burlington, he visited 37 states. Being on the road also allowed him to take day trips into places like Chicago, Green Bay and South Dakota,

“There’s actually more time to do stuff on away trips, because your report time is four hours before the game, so you have time up until 2 or 3 p.m.,” he said. “I ate a lot of soul food in the Midwest and deep South.”