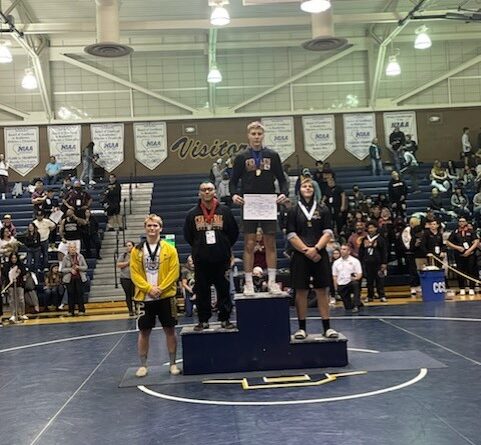 With five of their eight qualifiers winning medals, and the team placing fifth overall among the 16 teams that had a qualifier, it was an overall successful day for the Fernley High School wrestling team at last Saturday’s 3A State Tournament in Boulder City.

But success is a matter of perspective, and the Vaqueros experienced their share of disappointments as well.

As a team, the Vaqueros placed fifth with 96 points, on point behind Lowry for fourth place. Elko won the team championship with 145 points, edging out Spring Creek, which was second with 142.5. Boulder City finished third with 108.5 points.

“The state wrestling tournament is filled with triumphs and heartbreak,” coach Ernie Garcia said. “We experienced a bit of both this past weekend. “

The Vaqueros entered the tournament with hopes of competing for the state title and winning multiple individual championships. While they fell short of those goals, they personified the old adage that if you set your goals high, you can still accomplish things to be proud of even if you fall short.

“Perception is everything,” Garcia said. “We finished fifth as a team, which is far from our goal. But when you take a step back and evaluate everything, there was plenty to be proud of.”

The Vaqueros had eight wrestlers qualify for the state tournament. Lowry, who finished one point ahead of them, had 12.

‘Our guys came to wrestle this weekend and they fought hard,” Garcia said. “Every team ahead of us had more wrestlers in the tournament. It’s hard to keep up with that but we did.”

McMackin got the tournament off to an exciting start for Fernley when he beat Pahrump’s Kyle Heaney by a 7-6 decision.

“We believed that if he could get past him then he would have a great shot at a spot in the state finals,” Garcia said. “So, we had a game plan and Camron executed it to a T. He continued to bring the energy to the team when he pinned the South’s #1 seed to punch his ticket to the state finals where he fell short to a really strong Lowry opponent.”

In the semifinals, McMackin pinned Eldorado’s Rigoberto Arana in 2:52, and in the championship match he was pinned by Lowry’s Coda Nichols in 3:44.

At 132 pounds, Brady Garrett went 1-2, losing to the eventual champ and third placer. He started the tournament by getting pinned by Gunner Cortez of Pahrump, the No. 1 seed from the South who wound up winning the title. Garrett bounced back by pinning Ben Schafler of Boulder City, then was pinned by Wade Mori of Lowry.

At 170, McCullar started off strong with a pin before falling to a Virgin Valley opponent who ended up dominating his way to a state title.

“Brandon worked really hard to win a state title this year but I was really impressed with the way he handled himself after that loss,” Garcia said. “He came back and pinned his way through to a 3rd place finish. It shows a lot of character to do something like that after someone else takes a goal away from you.”

McCullar pinned Abraham Oliveros of Pahrump in the first round, before his loss to Cutler Crandall of Virgin Valley. He rebounding by pinning Andres Flores of Elko and Clay Whipple of Moapa Valley.

In the 195-pound bracket, Kreller continued to be a dominant force with pins of Ronnie Cross of Pahrump and Matt Loyd of Spring Creek to punch his ticket to the finals where he fell short to Irby Brownson of Boulder City.

“It was fun to watch Kale this year,” Garcia said. “He went from a middle of the road guy to a dominant wrestler.”

At 220 pounds, Glass became the second wrestler to win a state title under Garcia. He pinned Rondey Alger of Chaparral, Caleb Brown of Boulder City and Frankie Maldonado of Chaparral to earn his pace on top of the podium.

“Nate Glass did what he did all year and that was win,” Garcia said.

Garcia said Glass was motivated to make up for being pinned in the state championship match two years ago.

“And he did just that. He deserved every bit of success that he had this year,” Garcia said. “He put in non-stop work since two years ago for this moment. Now he will continue his career at Cal Poly next year.”

In the 285-pound class, Slaughter had a similar day as McCullar, where he came up short in the semifinals but dominated his opponents after that to take third.

He pinned Ty Hanks of Pahrump in 16 seconds in the first match but lost to Dylan Spencer of Boulder City in the semifinals. He came back to pin Jose Galvin of Chaparral and Jermiah Lewis of Eldorado.

“Tyler had been out due to a football injury most of the year so he didn’t have a ton of mat time, but it was awesome to see him walk away with a medal,” Garcia said.

Garcia said the Vaqueros will take those triumph and heartbreaks and continue working toward their goals.

“I don’t think there’s an individual or team out there that doesn’t want to win a state title,” he said. “It’s certainly our goal and something that we want to become part of the culture of Fernley wrestling. But changing and building a culture of excellence takes time.”

Garcia said the Vaqueros are inching closer to their goals every year.

“I am incredibly proud of this team and what it was able to accomplish despite all of the adversity it faced,” he said. “We’ll be back next year with five returning state qualifiers, two returning medalists and a whole lot of potential.”