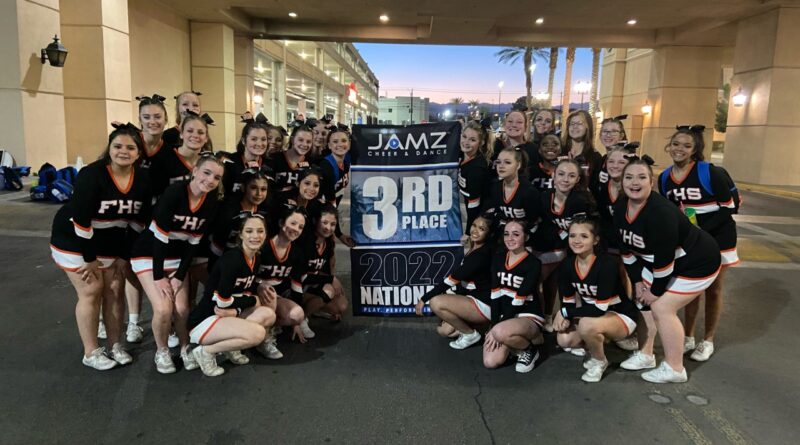 In the process, a team that exists to support others found themselves overwhelmed by the amount of support they received.

Fernley placed third behind Las Plumas High School, of Oroville, Calif. and Saddleback High School, of Santa Ana, Calif., in the Jamz Nationals Varsity Show Cheer Level 3, and coach Erika Rasche is hoping it paves the way for the team to attend more competitions and possibly return to the national competition with an even better chance to win.

Because Covid-19 restrictions have limited competitions in the past two years, Fernley was able to attend this year’s Nationals by registering, but as things open back up, Rasche is hopefully they can get there in the future by winning some regional competitions.

As it was, the Vaquero cheerleaders, only found out about a month before the competition they were accepted to compete. Rasche said she immediately went to work studying what the judges would be grading and upgraded their routines to meet those criteria.

Meanwhile, the team competed only once prior to Nationals, at Damonte Ranch, where they finished third behind Spanish Springs and Damonte Ranch.

Hampering their preparation, the Vaqueros lost several cheerleaders at the end of the first semester due to injuries and grades, including a broken foot suffered by a person who played a key role in the pyramid formation. The took 29 cheerleaders to compete at Nationals, after having 35 earlier in the year.

“In pyramid every single person is being utilized,” Rasche said.

Another cheerleader volunteered for that role, but the team had to adjust quickly.

At the Nationals competition, each team was allowed a 2 minute, 30 second routine on each day of the competition, judged in two categories under difficulty, technique and execution. After the first day, Rasche said they took the feedback from the judges and spent the rest of the day practicing in the parking lot at the Orleans Arena.

“On Day 1 they hit their routine, and the energy was really, really high,” Rasche said. The judges suggested they work on their connection on dismounts, worked to apply those changes.

“On Day 2 the energy wasn’t as great,” Rasche said. “Now we know to have our dismounts in ahead.”

Unlike a four quarter football or basketball game, where a team can have a whole game to overcome an interception or other mistake, a cheer routine of two and a half minutes leaves no chance to overcome a single mistake.

“Little things can go wrong in a split second,” Rasche said. “I get kind of a knot in my stomach before they go on. They work so hard, so feeling that routine, that’s the successful part.”

During the fall and winter, the cheerleaders typically perform on the sideline of every football game, at home and on the road, and at halftime of homes games, although last season they didn’t travel due to Covid-19 restrictions.

Rasche said the girls were amazed to see the amount of support they received from the school and the community. Student leadership sent the team a video from classes wishing them good luck, and placed posters around the school. In addition, there was an outpouring of support on Facebook, Instagram and other social media.

“It was amazing to see how much love and support on social media,” Rasche said. “And because it was in Las Vegas not everybody’s family could attend, but we had a really big support system behind us.

Now that they’ve competed at that level, Rasche said the goal is to get back. She’s hoping to add at least one more competition next year in addition to Damonte Ranch, and try their luck in qualifying for nationals again. The team is losing seven seniors, but will have about 19 back if they all choose to return. Rasche said the program can have up to 60, between freshman, JV and varsity teams.

“Now we know this is a possibility,” she said. “I think it really shows we’re making a name for ourselves. We want to get every season we can. We want to give these girls opportunities past cheer teams didn’t have.”