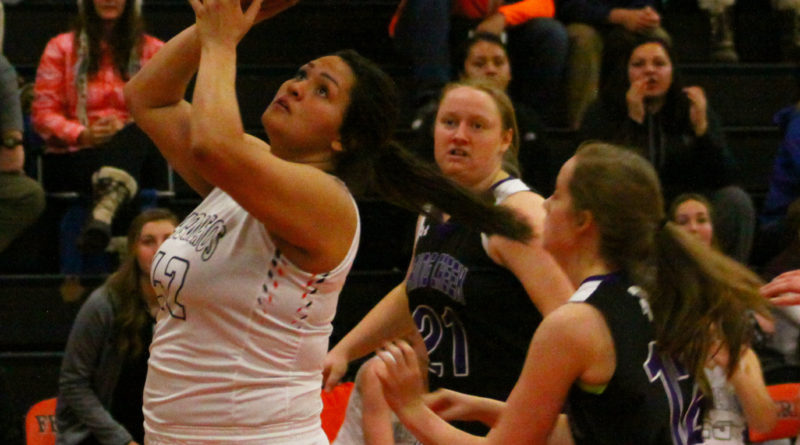 Twice this weekend the Fernley High School girls basketball team found itself in a game on the line in the final minute.

Both times things went against them.

The Vaqueros lost 34-33 to Spring Creek Friday night, in a game that was tight throughout.

“We played well the entire weekend and just came up short in both games,” coach John Rogers said.

Friday, Rogers was particularly pleased with the Vaqueros’ defense, and he said they got the ball to the right people in the right spots offensively, and just couldn’t make enough shots.

“From the first quarter on, we had plenty of opportunities to score and wide open shots,” Rogers said. “When you hold a team to 34 points, you should win that game, but we didn’t get the ball to go through.”

A missed free throw by the Vaqueros with 0.2 seconds left sealed the game for Spring Creek, but Rogers said the game was lost not by the final sequence, but because shots weren’t falling.

Trailing by 5, the Vaqueros gave themselves a chance when Hailee Edgar drove the right side of the land and was fouled while hitting a running shot. She converted the free throw to 34-32 with 1:45 left in the game.

Both teams missed several chances to score, and the Vaqueros called timeout to set up a final play after rebounding a Spring Creek miss with 29.8 seconds left. A held ball was called after a missed shot with 5.2 seconds left, and the possession arrow gave the ball back to Fernley for a last chance.

Saturday against Elko, the Vaqueros trailed by 20 in both halves, but fought back and cut the lead to 2 with 30 seconds left.

They turned the ball over on their next possession and Elko scored a layup. Fernley then missed its next shot and had to foul.

“Good effort all around,” Rogers said.

“Elko shot the ball well and hit a ton of contested shots so give them credit,” Rogers said.

Tuesday’s game in Truckee has already been postponed because of the flooding in the area this weekend. The Vaqueros will be back in action Saturday at 1 p.m. at Sparks.