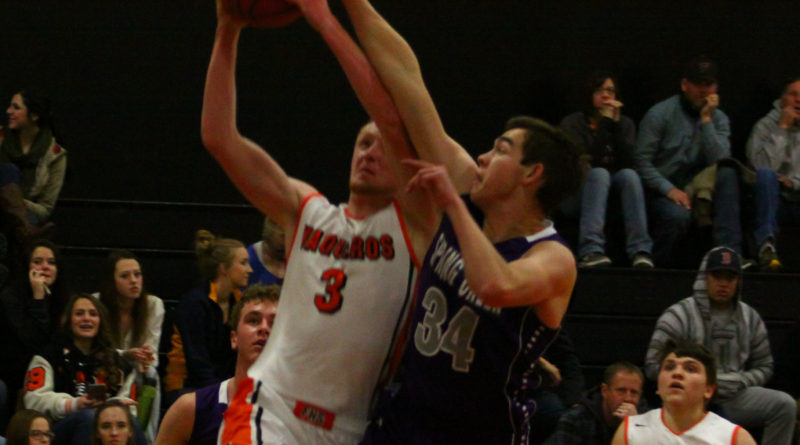 Three years ago, when the seniors on this year’s Fernley High School varsity boys basketball team were freshmen, many of them sat in the stands and watched as Elko beat Fernley 88-22.

The Vaqueros beat Elko for the first time in school history, 42-39, ending Elko’s 42-game winning streak in Northern 3A League play. The Vaqueros also avenged the loss that ended their season last year, to Elko in the semifinals of the regional tournament last February.

“It’s been a process,” coach Derek Miller said. “They beat us 88-22 three years ago and these kids who are seniors were all freshmen and saw that, and they dedicated themselves to get better over the summer. That’s why we go to Rocklin in the summer, why we play in tournaments and why we work.”

The Vaqueros got the ball back with the game still tied, and ran about 30 seconds off the clock before calling time out with 7 seconds left. Howe was fouled shooting a 3-pointer with 2.9 seconds left, and he made all three free throws. Elko inbounded the ball to halfcourt and called a quick time out, but Ethan Hunter deflected the inbounds pass and time ran out.

“It was huge for us,” Miller said. “You just don’t know what to expect coming off Christmas break, but we had two real solid defensive games, which was big for us down the stretch.”

A year ago, Justin Turner, Fernley’s best inside player, injured his knee against Spring Creek the night before the Vaqueros played Elko, and the Indians’ forward Kyrin Allen had a big game.

“They’re not as deep as in the past, and we hoped we could do a job on Eric Klekas, make him work for his points, because everything goes through him,” Miller said.

Klekas led Elko with 15 points, but the Vaqueros’ plan slowed down the Elko attack, and the Vaqueros were able to play with a lead for much of the game.

“We came up with pretty good game plan and the kids executed it,” Miller said.

Zach Burns and Turner each scored 12 points to lead Fernley.

Friday the Vaqueros put together a workmanlike performance and methodically beat Spring Creek, 59-49.

Burns finished with 22 points, Turner scored 13 and Ren Arroyo had 10.

“Justin Turner, I was pleased with him, and Ren was aggressive and Russ Ortiz was aggressive, and that’s what we needed out of those guys,” Miller said.

Miller said he was pleased with how well the Vaqueros played despite shooting poorly from the floor.

“It shows how much we’ve improved when we’re not on offensively and do the little things to win,” Miller said. “We got to the free throw line a lot, and knocked them down when we needed to.”

Tuesday’s game at Truckee was postponed because of this weekend’s flooding. Next up for the Vaqueros is a game at Sparks.

Fernley will go to Sparks in fourth place in with a 4-2 league record, and 10-5 overall.