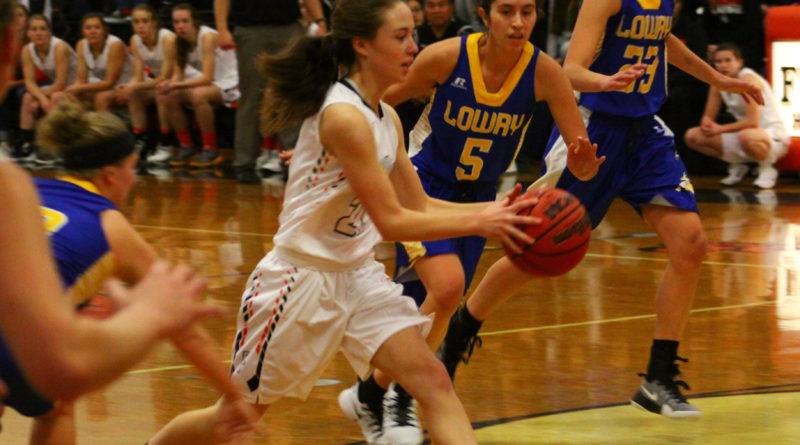 A Lowry team looking to bounce back from a loss proved to be too much for the Fernley High School girls basketball team to handle Saturday afternoon.

Lowry hit seven 3-pointers in the first half and held Fernley to two points in the third quarter to key a 50-38 win.

“It felt like it was more,” Fernley coach John Rogers said. “We knew they could shoot. It was just a simple example of not closing out with hands up.”

Alyssa Kuskie had all 13 of her points in the first half, including four 4-pointers, to lead the Buckaroos. Sydney Connors added 10 points for Lowry, including 7 in the third quarter, in which the Buckaroos outscored Fernley 13-2.

“I thought our best quarter was the third quarter because of our defense,” Lowry coach Chelsea Cabatbat said. “We’ve just got to play four quarters of defense and our offense will come.”

The offense came from the start, as Kuskie hit three 3s and Brooklyn Backus made two to stake the Buckaroos to an early 19-9 lead.

Kuskie and Backus each hit two 3-pointers for Lowry’s first four baskets, getting the Buckaroos off to a quick 12-4 lead in the first three and a half minutes of the game.

Fernley got within 5 at 19-14 on a basket by Brittney Gaitan and within 23-17 on a 3-pointer by Celeste Condie with 4:20 left in the quarter, but Connors and Kuskie bookended 3-pointers around a basket by Fernley’s Taylor Richardson and Lowry went to the half with a 32-23 lead.

After the teams traded baskets to open the third quarter, Lowry scored 11 consecutive points, while Fernley went scoreless for the final 5:12 of the quarter,

“We’re not the type of team that can go long droughts without scoring,” Rogers said. “It just felt like things were so hard to climb that hill. Maybe halftime was bad thing to have.”

The Vaqueros had trouble getting the ball inside against Lowy’s zone defense.

Connors hit two baskets and a free throws, Tiana Herrera scored inside off a nifty feed after Kuskie drove the baseline, Connors got free on an inbounds play under the basket and a shot by Hailey Hinkle beat the buzzer for a 45-25 lead.

Lowry lad lost 59-42 earlier in the week to Fallon, and Cabatbat said the Buckaroos were desperate to bounce back with a win Saturday.

“We’ve got all road games before the new year, so it was important to get a win,” she said.

Fernley hosts Fallon Tuesday night, and Rogers said he was pleased with the way his team fought all night after falling behind.

“We don’t go for moral victories, but whether our downfalls or droughts, we competed,” Rogers said. “I think we took another step in the right direction, even with the loss.”