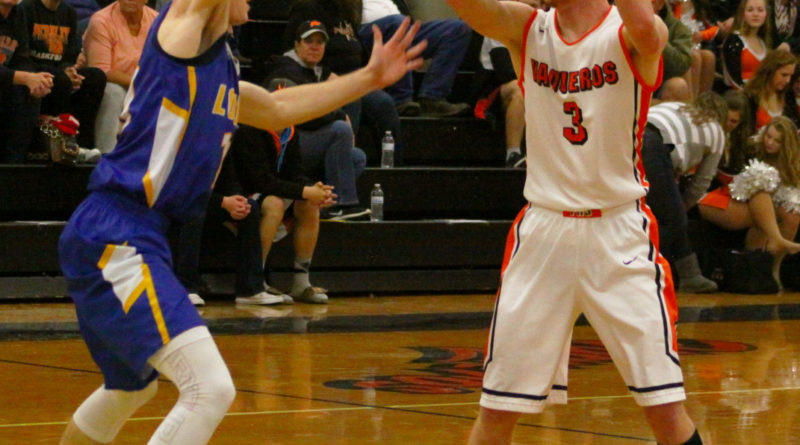 The first time playing at home this season turned out magical for the Fernley High School boys basketball team.

The Vaqueros hit 10 3-pointers as a team, had four players score in double figures and rolled to an easy win over Lowry, 78-55 Saturday night.

The win was the Vaqueros first over Lowry under head coach Derek Miller, now in his 7th season, and leaves Elko as the only northern 3A team Miller has never beaten.

The Vaqueros exploded offensively in the last three quarters, and did it with nine different players getting in the scoring column. Zach Burns led the Vaqueros with 27 points, but he had plenty of help. Dario Ceresola had his biggest game so far this season with 16 points, Drake Howe added 14 and Justin Turner scored 10.

Miller said it was that balance, and commitment to sharing the ball, that got the Vaqueros in high gear.

“We have tendency do this early in season, in both games we lost, we don’t make extra pass,” Miller said. “But we executed and shared the basketball. That’s what got us going and I was pleased. When we get everybody involved, we’re way better.”

The game was tied 12-12 after the first quarter, but it was all Vaqueros after that.

The Vaqueros hit six 3-pointers in the second quarter, three by Burns, one by Howe and two by Ceresola, outscoring Lowry 25-15 to take a 37-27 lead.

In the second half they began to get the ball to the basket, getting 16 of their 21 points in the quarter from inside the arc.

Defensively the Vaqueros stymied Lowry with a zone defense, after striggling a bit in their fullcourt press.

”We’re trying to be a pressure defense, and I’m still not sure we’re in the shape to do what I want,” Miller said. “I thought we got tired, but we went zone and got some stops.”

Miller said he was particularly pleased with the playoff Ceresla and Justin Turner, saying Turner was active and ran the floor well. He was also happy the Vaqueros made 7-10 free throws, after missing 11 in a loss to South Tahoe on Tuesday.

The win evened Fernley’s record at 1-1 in the Northern 3A and they are 4-2 overall. The Vaqueros host Fallon Tuesday. They also play Dayton next week, and will compete over the holidays in the Rail City Classic. Miller said playing more though the holidays than in past season will help the Vaqueros’ development.

“We’re just going to get better as the season goes on,” he said.