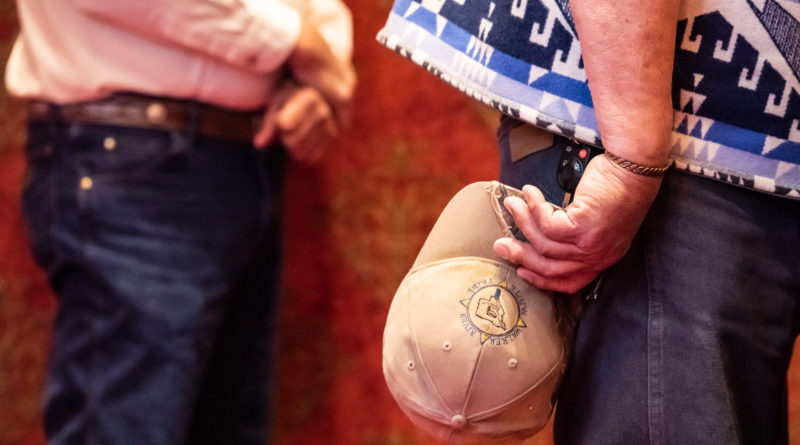 The hearing on April 11 started out as routine as any mid-session legislative hearing does. The bill’s sponsor, Democratic Assemblywoman Sarah Peters, gave a presentation and described a conceptual amendment. Supporters spoke about why the bill mattered. Lawmakers asked a few questions.

Then something unusual happened. The chair began calling out the names of nearly everyone on Assembly Government Affairs. One-by-one, Democrats and Republicans were signing on as co-sponsors of Assembly Bill 264, which requires state agencies to include tribal nations in their decision-making process after a history of leaving Nevada’s 27 tribes and colonies on the side.

What started as a procedural hearing ended in a bipartisan gesture, as the panel passed the proposed measure with all but one committee member having signed on as a co-sponsor.

“I’ve talked to a few people since that’s happened,” Laurie Thom, the chairman of the Yerington Paiute Tribe, said in a recent interview. “And they said, ‘That’s unheard of.’ I believe we had [two] co-sponsors in the beginning and to leave that meeting with [14] co-sponsors makes us feel better. It makes us feel like our Nevada representatives are not just for Nevada citizens. They are also for our tribal citizens… It took me back. It really meant a lot. I could really feel the energy in the room.”

On Tuesday, the bill passed unanimously out of the Assembly.

Modeled after 2009 legislation passed in New Mexico, AB 264 aims to increase collaboration between tribes and state agencies that are often charged with developing wide-ranging policies, agreements and procedures. The state’s relationship with tribes often ebbs-and-flows depending on who occupies the governor’s mansion or the Legislature. And in the everyday tangle of government bureaucracy, tribes are not always asked for their input or only given notice of an action after the fact.

Thom said that Peters, a first-year legislator and environmental consultant who has worked on reclamation projects with tribes, understood the problem firsthand. The Yerington tribe and the Walker River Paiute Tribe have criticized state and federal officials for their handling of the Anaconda Copper Mine clean-up. Although most mining ended in 1978, pollutants from the open pit copper operation leached into the aquifer. When the state entered into a deal last year with the Environmental Protection Agency to transfer clean-up responsibility, both tribes said they were not consulted  on the final decision. Since then, the tribes have asked Gov. Steve Sisolak to undo the deal.

Richard Arnold, the chair of the Nevada Indian Commission and a Southern Paiute, described consultation across state agencies as “piecemeal.” Given how large and complex the state’s bureaucracy is, Arnold said decisions are often made based on “budgets, timing and personalities.”

“That creates challenges,” he said. “Tribes want state agencies to reach out to them.”

Arnold said he hoped the proposed bill could begin to bridge the gap.

The legislation charges the Nevada Indian Commission with drafting a consultation policy that promotes “effective communication and collaboration,” “positive government-to-government relations” and “cultural competency.” If state agencies regularly work with tribes, the bill would require them to appoint a tribal liaison to implement the policy and train staff. Finally, the legislation would require the governor to meet with tribal leaders at an annual summit.

The Nevada Indian Commission, a state agency formed in 1965, already serves as an intermediary for state-tribal relations. Although the commission does not speak for the tribes, Arnold said the creation of a formal protocol would bolster the ability for those relationships to work more smoothly.

“Federally recognized tribes have a unique status and as such, tribes always… expect that we need to address things on a government-to-government basis,” Arnold said.

Some state agencies, including the Nevada Division of Environmental Protection (NDEP), currently have tribal liaisons and consultation policies. In an email, Greg Lovato, the division’s administrator, said tribes were consulted during discussions over Anaconda and their concerns were included in the final decision. But he added that AB 264 could help clarify the process.

“One potential benefit of AB 264 would be the establishment of a consultation framework that all state agencies can utilize to clarify what consultation entails and provide guidance on what types of activities require formal tribal consultation,” Lovato said. “Whomever is hired as the next executive director of the Nevada Indian Commission will be crucial to helping define and improve the process for state agencies to work with tribal governments.”

Peters, whose environmental consulting firm has worked with the Yerington tribe, said that the legislation aimed to facilitate a dialogue in decision-making while respecting tribal sovereignty.

“It’s always been at the whim of the governor how our government treats tribal governments,” Peters said at the bill hearing in April. “And this codifies what that relationship should look like, it creates transparency and accountability, and it enables the Indian Commission to take steps to ensure that there is appropriate training and mechanisms for maintaining these relationships.”

Tribes interface most often with the U.S. government, which has a trust responsibility to federally recognized tribes. But the state government also plays a key role in tribal governance. Some federal grants, for instance, are administered by the state and allocated to the tribe from Carson City, not Washington, D.C. In other cases, state agencies could place pressure on the federal government to better serve tribal communities. The state also works with tribes in responding to natural disasters and administering water rights.

And tribes watch the actions of the state closely. When Attorney General Adam Laxalt signed onto an amicus brief last year contesting a 9th Circuit decision that extended groundwater rights to tribes, Thom described it as “a slap in the face to every tribe in Nevada.” Laxalt, with nine other states, said the decision could affect an already tenuous water rights system.

Sondra Cosgrove, who teaches a course on Native American history at the College of Southern Nevada, said in recent decades, state governments have had an increasing role to play in working with tribes. After World War II, she said Congress passed laws that gave several states, including Nevada, more authority to police tribal lands, making the state more involved.

“Any type of consultation is an improvement over what we’ve done,” said Cosgrove, who also serves as the president of the League of Women Voters of Nevada. “In general, it shows a level of respect to include [tribes] in the process. To get feedback from them and to take that feedback into consideration shows a lot of progress from the state of Nevada.”

Alan Mandell, the vice chairman of the Pyramid Lake Paiute Tribe, argued that there are some areas where the state is doing adequate consultation. He said that the state’s Department of Health and Human Services regularly meets with its counterparts at the tribe. But the Northern Nevada tribe has testified several times in favor of the bill, arguing that it would improve the process, especially for smaller tribes that don’t have a strong presence in Carson City.

“I believe probably [every tribe] is watching [the bill],” he said.

In some cases, Peters said the lack of dialogue stems from the lack of a formal process, a primary issue that the bill is looking to correct. When the Southern Nevada coal-fired Reid Gardner Generating Station shut down and started the reclamation process, Peters said the Moapa Band of Paiutes lacked the formal process for potentially working with the state on monitoring toxic coal ash.

“We have these gaps in protocol to keeping our communities safe,” she said.

Peters pointed to similar issues in the Humboldt River Basin, where she said tribes are not brought in early enough to conversations about reclamation.

“Having a process to include them…in the conversation of reclamation, exposure and risk [is] an important piece of our regulatory process that we don’t have established right now,” Peters said.

At the hearing in April, Peters said the consultation bill came at a time when tribes in Nevada were finding a new voice, and it was important that their Nevada representatives listened.

“One of the things we have seen over the last five or so years is a resurgence of power from our tribal governments,” she said. “And it’s appropriate. It’s necessary they engage and take their power back in a way that ensures their members and their culture exists in perpetuity.”