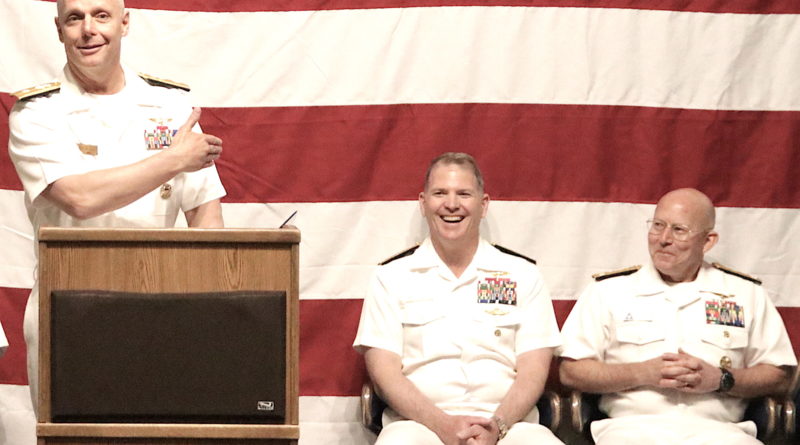 Cheever, who will begin his new assignment in Norfolk, Virginia, with a carrier strike group, thanked the NAWDC personnel, Naval Air Station Fallon and the local community for working as one team. He also acknowledged the reservists, who are major part of this team, as well as the civilian contractors. The outgoing admiral, who served previous tours in Fallon from 1995-1998 and again from 2008-2011, said Fallon and Churchill County are big supporters of the Navy.

The Illinois native also touched on the Fallon Range Modernization Complex and what it means for the future of the nation’s defense. Since he assumed command in September 2017, NAWDC has also expanded. NAWDC’s new $28-million Air Wing Training Building had a ribbon cutting last year, and a contract was awarded to a California company to construct another Air Wing Training Facility that will support desk-style aircraft simulators, Virtual Aegis Combat simulators, F-35 Mission Rehearsal Trainers, and unmanned aerial system simulators, E-2D simulators and support spaces.

Cheever said the expansion is important because of future threats.

“It’s been a great year and half to see where we need to be,” he said.

Miller said he enjoys spending time at NAWDC, where, he added, warriors are made and aviators represent the nation’s future. Although he said the United States finds itself in a back-to-the-future scenario with China and the re-emergence of Russia as world powers, he said the previous Cold War was one without fighting main adversaries.

“That should be our goal today,” Miller said. “Diplomacy backed by combat power.”

Miller added the national defense strategy is to prepare for war, however, and win. He said NAWDC produces the most innovative, creative warfighters who are pushed to their limits with the aircraft they fly. He credited Cheever for setting a high standard for training.

He joked with Cheever, however, who leaves Fallon for the third time.

“Who knows. We might bring you back for Top Gun 3,” said Miller, referring to an imaginary third sequel for the iconic movie about naval aviators. The sequel, though, is expected to be released sometime during mid-2020.

Miller said Brophy’s background will serve him well as he assumes command of what Navy aviators call the “Jewel in the Desert.” He said these are challenging times.

Brophy, who also spent considerable time training in Fallon, received his commission form the U.S. Naval Academy in 1991, earned a master’s degree from Troy Sate University the following year with a Master of Science degree in Management and was designated a naval aviator in 1994. He graduated from the U.S. Navy Fighter Weapons School in Fallon in 2010.

During his career, Brophy has logged more than 3,900 flight hours and conducted 100 combat missions.

“You left me a well-oiled machine,” Brophy told Cheever.

Brophy, who served as executive assistant to the Chief of Naval Operations for Operations, Plans and Strategy, said naval aviation is part of a long culture, and the pilots who are trained at NAWDC represent the next generation of aviators.

“We develop our standards and hold them high,” he said.