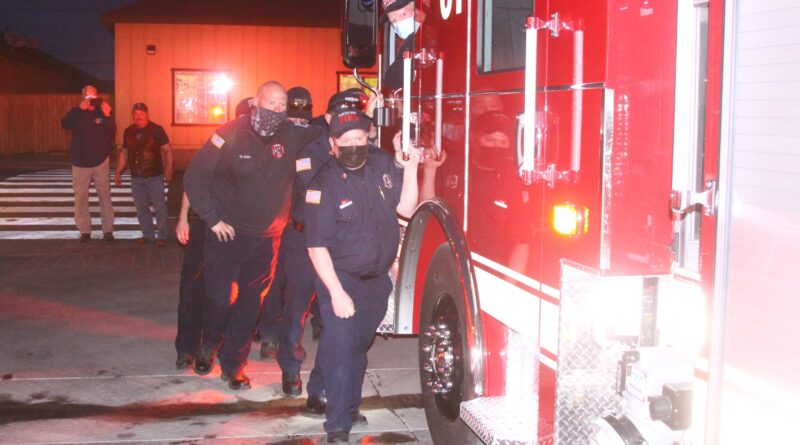 One of new engines dedicated to Carr family

Back in the 1800s, in the days when fire trucks were pulled by horse carriages, firefighters returning to the station after putting out a fire would have to unhook the horses and push the fire pumpers back into the station.

The tradition of firefighters pushing new fire equipment into the station by hand has continued since then.

“Whenever we get a new engine, it is bad luck to use the engine operationally until it’s been pushed into its home,” North Lyon County Fire Protection District Chief Jason Nicholl said Tuesday at a community event to celebrate the purchase of its two new fire engines with a pushing in ceremony at the Main Street Fire Station.

The District began looking to buy a new fire engine after one of its old engines experienced a catastrophic failure about a year ago. New fire engines cost about $700,000, but Nicholl said by buying two, the District was able to get them at a total cost of about $1.2 million. They are being financed over seven years.

Public Information Officer Jim Sullivan said having new, top of the line equipment will make a big difference for the crews responding to fires.

“The firefighters here at North Lyon, that’s all they do is train and they’re a great crew,” Sullivan said. “To have the best state-of-the-art equipment that’s not going to break down on them, it’s a heaven blessed sent to them. They’re beyond ecstatic to have this.”

Nicholl also announced that Engine 61, based on Main Street, is dedicated to the Carr family. Steve Carr has served a long and distinguished career as a firefighter, starting in 1972 with the Mason Valley Fire Department. With North Lyon Fire, he has been a firefighter, training captain, department chief, and he has twice served as the district’s interim chief. Linda Carr served several terms on the district’s board of directors.

“Statewide, this family has had a bigger impact on the fire service in Nevada than anyone else,” Nicholl said.

The engine will be named Linda.

“I’m absolutely, utterly shocked, but it’s an honor,” Linda Carr said. “We put a lot of time into this place and fire service is definitely in our families.”