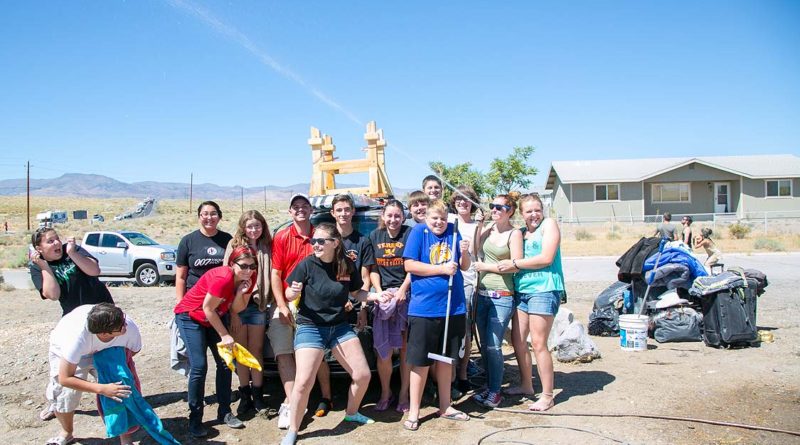 Sending 100 Fernley high school band members to Washington DC to represent Nevada in the 2017 Independence Day parade is expensive. The band must raise close to $150,000 to participate. Consequently, band director Jason Smith and Fernley High School band members were working hard over the Labor Day holiday to raise funds needed for the trip.

Band members, in teams of 20, worked shifts of 2 hours each cleaning dust encrusted Burner cars, vans and RVs. They also had an opportunity to meet a few of the Burners such as Stuart, a Burlington, Vt. native. Stuart was part of the Burning Man Root Society and played his Taiko drum while on the playa. The large 58″ diameter, 50″ long drum was able to fold up and fit into his Dodge Caravan for the ride home.

When asked why he stopped to have his car washed, Stuart says, “I wanted to support the local community and the band just seemed like a good cause to support.”

Audrey McDowell, Assistant Drum Major, enjoyed meeting all the Burners. She says, “They seem like interesting people from all over the world. They gave us a few things.” Gifting, the act of gift giving by an individual who does not expect anything in return, is one of the primary tenets of Burning Man.

In addition to marching in the Washingtn DC Independence Day parade, band students have an opportunity to learn about America’s history and visit the national monuments. Band member Matthew Durso can’t wait to go to Washington.

“Few of us have left the Nevada or California area,” he said. “I think it’s going to be a great experience.”

Donations to support the band may be made through their Go Fund Me page at: https://www.gofundme.com/23bxdkcc