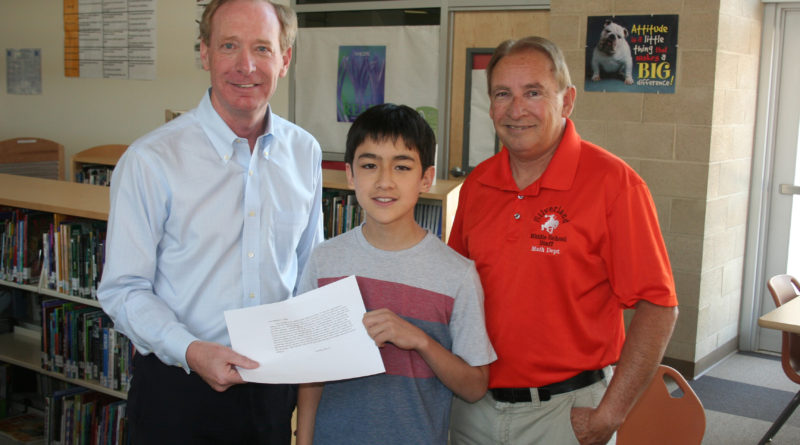 When Silverland Middle School 7th grader Ski Yi wrote his letter to Microsoft president Brad Smith as part of a class assignment last spring, he doubted anything would come of it.

So much so, that he even wrote that in his letter.

So when his parents told him he needed to go to the school on July 17  for something related to his letter, Yi thought it was no big deal.

Instead, when Yi walked into the library, he was shocked to be introduced to Smith.

“I had to pinch myself,” Yi said. “How could a piece of paper and a little ink come to all of this?”

Smith and several other Microsoft executives came to Fernley specifically to meet Yi, after receiving his letter earlier this summer.

The letters were an assignment by 7th grade math teacher Ken Jordan as part of a lesson on the stock market. Students were required to follow a company stock and then write a letter to the company.

In his letter to Smith, Yi wrote that he chose Microsoft because they manufacture every child’s favorite thing, the Xbox, as well as “awesome computer software and hardware.” Yi also wrote that he figured a secretary would just throw the letter in the trash.

Instead, Smith said, his secretary showed him the letter, and he immediately began to share it with other company executives.

“My secretary read the letter and said you have to read this,” Smith said. “I literally walked down the hall to show this to people.”

Smith and several other company executives were heading to Las Vegas for a sales meeting, and he decided to make a stop in Fernley to meet Yi.

“We said we would love to go meet this young person,” Smith said. “It’s honesty.”

Smith arranged the meeting through the school office. Yi’s parents Kyle and Eva, were included in the plan, but decided not to tell Yi.

Smith presented Yi with a new laptop and several games, and also donated three new computers to the school and a new laptop to Jordan.

“I just wanted to play along,” Eva Yi said. “For my son, the school and the community, it’s exciting and amazing to get that little bit of recognition.”

Yi had never seen a photo of Smith, and had no idea what was happening until he was introduced to Smith.

“I feel like I’m blessed,” he said. “I was speechless. Apparently I’m not worthless to society.”

Yi’s letter was one of 140 sent by Jordan’s students. Several of the students received correspondence in return, but Jordan said he never imagined a company president would make a personal visit to meet a student.

“Now they’re always going to remember you when you get your engineering degree,” Jordan told Yi.