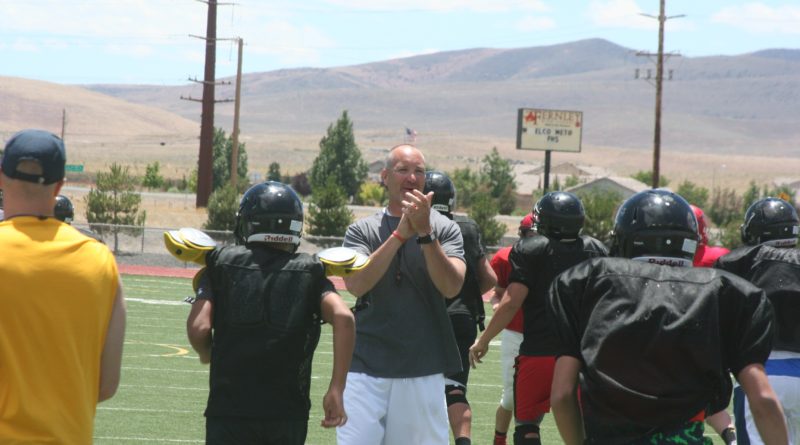 Eastern Oregon football coach Tim Camp walked onto the field last Thursday at Fernley High School and saw lines of football players doing warm-up drills, and immediately the motivator in him came out.

“You’ve got a great opportunity here,” he shouted, while patting players on the shoulder pads. “What are you going to do with it?”

Last week was the fifth consecutive season Camp and his coaching staff have hosted the Eastern Oregon University football camp in Fernley. The camp and others like it that Eastern Oregon hosts in Northern Nevada offers local players the chance to learn fundamentals and skills from college coaches, and has also opened up recruiting channels. Eastern Oregon has had several players from Northern Nevada the past few years and on the roster for the coming season. Former Lowry player Jace Billingsley, who set several school and NAIA records, was signed this spring as an undrafted free agent by the NFL’s Detroit Lions.

“It all started with Jace Billingsley and now he’s in an NFL camp,” Camp said.

The Fernley camp was the fourth the Eastern Oregon has hosted already this summer.

“This is the best way to spend a summer, in my mind,” Camp said.

“They run all the drills and we get a chance to see what they’re doing and we can learn as coaches, then we get some team time and some scrimmage situations,” Ward said.

Camp and his staff also spent time talking about schemes, drills or other aspects of coaching with the high school coaches

“I was just in the office with coach Ward talking the triple option,” Camp said.

“I’m not a yeller and screamer, I’m more of a motivator,” Camp said. “We’ll hold guys accountable, don’t get me wrong, but they can see how we coach and how we are.”

For the Vaqueros, the camp kicked off a busy summer program. After taking this week off, the team begins a 3-week summer conditioning program next Monday leading up to the beginning of official practices starting Aug. 3.