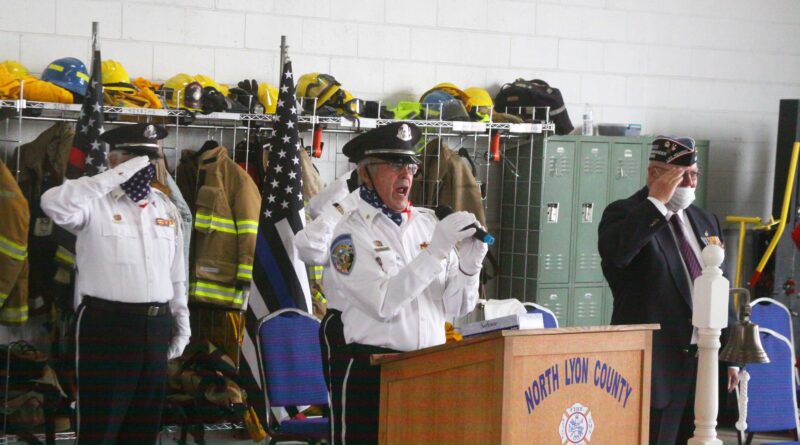 The suits of 343 firefighters hung empty, not to mention those of 60 police officers and 150 service members, after their wearers were killed during the terrorist attacks on the World Trade Center and the Pentagon on Sept. 11, 2001.

Friday, firefighters, sheriff’s deputies, Highway Patrol troopers and a crowd of about 100 socially distant residents that included many veterans gathered at the North Lyon County fire station to remember all of those who died on and since those attacks 19 years ago. A line of empty firefighter’s suits hung along the wall behind the podium where one by one, the speakers recalled the horrors of that day, the people who died, and need for Americans to remember that day and to pull together to get through troubled times today.

And while those suits belong to the firefighters of the North Lyon Fire Protection District, who are alive and well and offering their service daily, they also provided an appropriately somber reminder of the lives lost that day, and from lingering effects to a variety of toxins that have taken vast numbers of the responders who helped sift through the rubble to rescue survivors and recover the bodies of the dead in the remains of the World Trade Center.

The annual Fernley 9/11 Memorial Ceremony is normally held at the Out-of-Town Park, but was held this year at the fire station because city parks remain closed to gatherings because of COVID-19 restrictions. Chairs were spaced six feet apart in the bay, while the large bay doors were open and many attendees stood outside.

During the ceremony, Ed King, President of King Construction, was presented with the award as Fernley’s 2020 Patriot of the Year.

As always, the ceremony was held in memory and honor of those who lost their lives on Sept. 11, 2001, but Nicholl reminded the crowd that the actual death toll is far greater, because of the number of rescue workers who sifted through the rubble who have died of cancer in the 19 years since.

One of those, he said, was his friend, Chris.

“Unfortunately in the weeks after 9/11, my friend Chris died,” Nicholl said. “He just didn’t know he was dead yet.”

Two months ago, Nicholl’s friend Chris retired after a 30-year career, and a few days later was diagnosed with “survivor’s cancer.” He died two Sundays prior to the 18th anniversary of the Sept. 11 attacks.

“We’re hear to remember the sacrifice of all the people that tragic day and every day since then,” Nicholl said. “We all have skin in this game. It affects all of us, and it will continue to affect all of us for years and generations to come.”

Nicholl implored everyone in attendance to reach out and support one another.

The first speaker, Mayor Roy Edgington, touched on a similar theme. Edgington said it’s not just the firefighters and police officers who died that day, or the people on the airplanes, in the Pentagon and in the towers.

“Since then, we’ve paid a hell of a price for that. People that dug and tried to bring the remains out from the towers have died from cancer,” Edgington said. “Our armed forces have been in combat for 19 years, the longest time our country has been at war.”

Edgington’s voice quivered as he delivered his conclusion.

“As we stand here and we remember those people, let us not forget the men and women in law enforcement around the globe who protect us from terrorism, the very terrorism that caused 9/11,” he said. “It’s still alive and breathing.”

United States Marine Corps Lt. Col. George Malone, the national commander of the Legion of Valor, was the keynote speaker.

“We remember the innocents who hailed from 90 nations and all walks of life,” Malone said. “We will never forget the evil terrorist attackers perpetrating murder on that fateful day.”

Malone had recently retired as the head of the Marine Corps National Command Center in Washington, D.C. and was participating with his son in a police and firefighter heroes golf tournament and just getting ready for the shotgun start when all of the participants beepers and phones started going off.

Afterward, he volunteered to return to active duty.

“I can truly say patriots from all backgrounds and all walks of life responded with speed and courage and with the compassion to this attack on America,” Malone said. “I ask you to never forget 9/11 and ensure that our story is told to all who follow after us. Even the smallest act of service, the simplest act of kindness, is a way to honor those who are lost. It is this way to reclaim the spirit of unity that followed 9/11.”