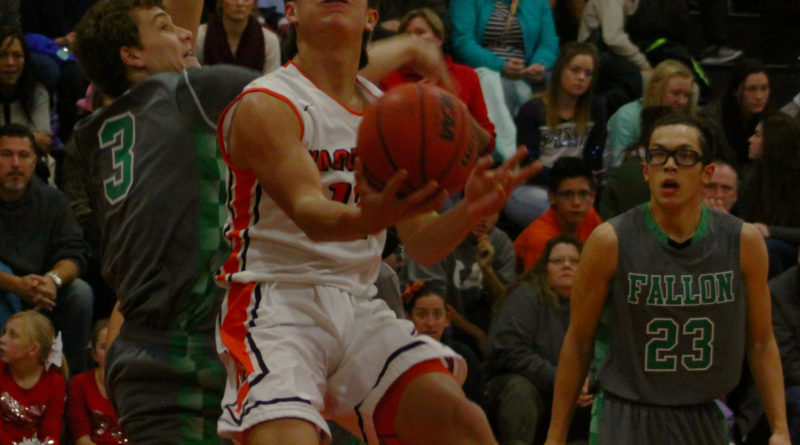 Beauty is in the eye of the beholder, and for the Fernley and Fallon boys basketball teams, no example proves that more than Tuesday night.

Fallon built an 11-point lead and held off a furious rally down the stretch to win in Fernley Tuesday night, 60-56.

For Fallon, watching video of Tuesday’s game might leave the Greenwave players feeling a little lovestruck, while the Vaqueros might be looking for some eyewash.

“That’s probably what they wanted coming in,” Fernley coach Derek Miller said. “No feel, no flow. It just got ugly.”

Not so for Fallon coach Brad Barton and the Greenwave.

“We wanted a scrappy game and it suited us pretty good,” Barton said.

The Greenwave succeeded both in clogging the lane and getting out on shooters, preventing the Vaqueros from unleashing an offense that scored 78 points Saturday night against Lowry.

The focal point of that defense was Fernley guard Zach Burns, who scored 23 points per game in the Vaqueros’ first two league games, against South Tahoe and Lowry.

“Our goal was to hold him under 15, and for him that’s an off night,” Barton said. “We were dead red on him and we had a freshman guard him the whole time, trying to keep him from getting the ball.”

The plan didn’t work by the numbers, but it did in practice.

Burns scored 26 points, but 11 of those came in the fourth quarter, which Fallon entered with a 47-37 lead. That was in large part because Fallon’s defense kept Fernley from developing any rhythm offensively

“If we would have played clean and tried to outshoot these guys, we’d lose by 40,” Barton said.

Despite not making a field goal attempt in the last 4:06 of the game and making only 6 of 14 free throw attempts down the stretch, the Greenwave held on with a handful of gritty plays.

“For this to be such a young team and to be in that pressure and keep their poise was exciting to see,” Barton said.

Miller, meanwhile, said the Vaqueros didn’t succeed at much of anything.

“We didn’t play well defensively, we shot poorly, they just outplayed us,” he said. “Then we stopped boxing out free throws, or fouled on box outs.”

Sophomore Branden Larson came off the bench to lead Fallon with 16 points, while Elijah Jackson added 12 and Nemeth had 9.

For Fernley, Howe was the only player besides Burns in double figures with 10, and Ren Arroyo scored 8.

“South Tahoe has big bodies and good guards, so we were fortunate to win tonight,” Barton said.

Fernley will try to bounce back when it hosts Dayton Friday.

“We’re going to have to get better all around and come ready to play, because they are,” Miller said.