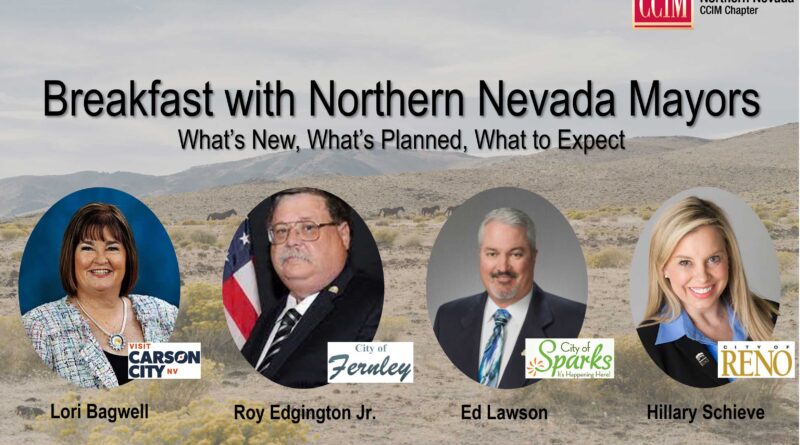 The Certified Commercial Investment Members (CCIM) of Northern Nevada Chapter will host the panel discussion on April 28, which will include Edgington and mayors Lori Bagwell of Carson City, Ed Lawson of Sparks and Hillary Schieve of Reno.

Commercial real estate development is a major indicator of economic vitality in a region. Northern Nevada has experienced unprecedented growth and demand for retail, industrial and multi-family developments to support the demand from residents and businesses alike. To address population growth in Northern Nevada, cities have been focusing planning and efforts on Affordable Housing, Rezoning, Building Codes, Infrastructure Improvements, Homelessness and the Public Lands Management Act which would allow local governments the ability to sell, develop and ensure conservation and sustainability of previously federally owned land.

“This is an exciting time to be involved in commercial real estate which intimately reflects our region’s growth,” said Tomi Jo Lynch, Northern Nevada CCIM President. “We are seeing record-low vacancy rates for commercial properties and a need for new development. This is a wonderful opportunity to learn first-hand what programs, incentives, future plans and proposals are available and in development in Northern Nevada cities.”

The general public and media is invited to attend this breakfast. For reservations, please visit www.NNevadaCCIM.com. The presentation will be held April 28, 2022 at 7:30a at the Renaissance Reno Downtown Hotel and Spa. Tickets for CCIM members are $40 and non-members are $50.