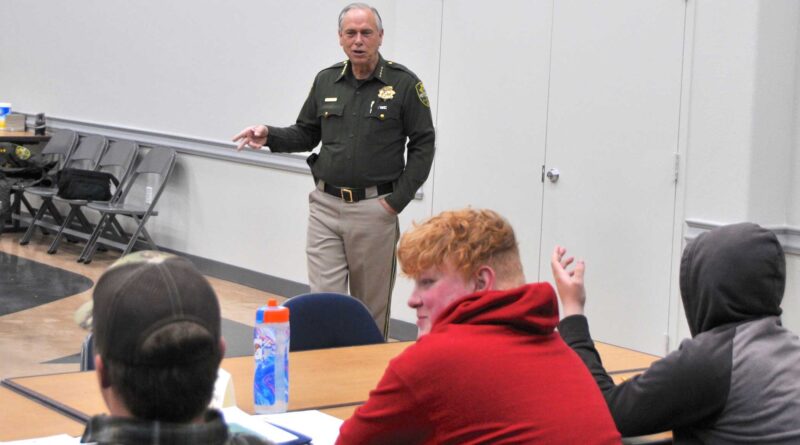 What better way for teenagers to learn about safely operating a motor vehicle than from the mouths of a sheriff and a couple of Carson City police officers?

“Ever been to a concert? I’m the pregame show,” Furlong joked.

After Furlong broke the ice, the driver’s education students learned about the dangers of impaired driving, offensive vs. defensive driving, distracted driving, most frequent infractions committed by drivers, pedestrian crosswalk rules, laws for operating a bicycle on roadways, recommended distances between vehicles at various speeds, and more.

Furlong, who has been the sheriff of Carson City since 2003, reassured the students that the officers who patrol the highways and city streets are doing so to ensure the safety of everyone.

He started the presentation by talking about pulling over a driver who wasn’t using their headlights at night.

“Why would anyone drive a car, if you don’t know how to operate it?” he asked.

After the driver made the excuse that the lights were too dim, Furlong reached in and turned on the car’s lights.

The sheriff emphasized to students the importance of knowing the vehicle they are operating so safety issues don’t arise when they are driving on the road.

Students spent the better part of the morning asking the officers questions:

• “How do you know when you can turn right on a red light?”

• “Can you split lanes on a motorcycle?”

• “Is there a moral obligation to stop for someone who is not yet in the crosswalk?”

• “What happens if someone who has epilepsy has a seizure behind the wheel and is in an accident?”

• “If someone is trying to cross the street outside of a crosswalk, should you slow down and stop for them?”

They were also provided with useful information unknown or forgotten by many drivers:

• Do you know you can get a DUI for drinking too much caffeine?

• Your passenger side door must be within 18 inches of the curb when you park your vehicle and that applies to when you park on the wrong side of the road, making it illegal to do so.

• You can be ticketed under the “Do Care” law if you don’t slow down when a signal light changes from yellow to red.

• A signal light remains yellow for 4 ½ seconds in Nevada.

• You can be ticketed for driving the speed limit in adverse weather conditions.

• Bicyclists can be ticketed, and if they are demonstrating recklessness, they can even lose their right to operate one.

• The top reasons drivers are pulled over are speeding, failure to obey traffic controls such as stop signs and following another vehicle too closely.

• You can be ticketed for exceeding the speed limit by just 1 mph, especially in a school zone.

• You don’t have to stop for a pedestrian who is on the other side of the crosswalk if the road is divided or there is a median, but you must wait for them to completely cross in many crosswalks.