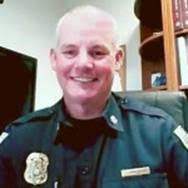 The driver of a vehicle that collided with a North Lyon County Fire Protection District vehicle driven by Fire Chief Scott Huntley on May 15 has been cited.

According to the NHP, the crash occurred on U.S. 95A at mile marker 24LY, near the railroad tracks at Wabuska.

NHP reports that Huntley had slowed down for stopped vehicles in front of him when the vehicle behind him failed to slow down, colliding with the rear of the red Ram fire department vehicle.

The driver of the vehicle that struck the fire department vehicle claimed no injuries. Huntley reported minor injuries and was treated at the scene.

The Nevada Highway Patrol did not reveal the name of the driver who was cited, or the charges.