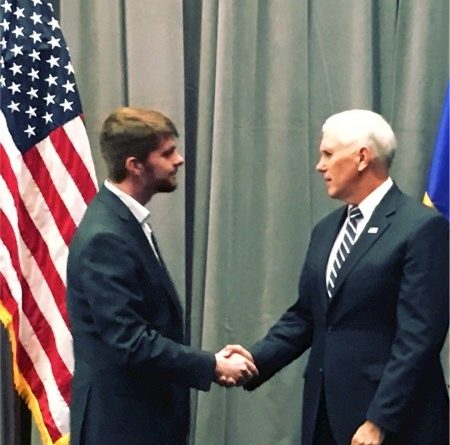 Wood is a graduate of Smith Valley High School, and has a Bachelor’s degree in psychology with a minor history, and Master’s degree in public policy/public administration from Liberty University.

Wood currently works in the Nevada Department of Health and Human Services, and for the last two sessions of the Nevada Legislature, ran the office of Assemblywoman Dr. Robin Titus.

“This county means a lot to me,” Wood said. “It’s home to me, with such history.”

Wood said his experience, both in the public sector, and in the private sector working for several small businesses and ranches in Yerington and Smith Valley give him the experience necessary to serve as the count recorder, an office whose functions are governed by Nevada Revised Statutes.

“It’s important to have someone who not only understands state statute, but how to change it if we have to,” Wood said. “ It’s important for us to have elected officials heritage here that really do care. It’s actually about doing the right thing for the people of this county, so we can continue that legacy that we have here. This is the epitome of rural Nevada.”

Wood said his campaign is based upon the principles of accountability to taxpayers, accessibility and innovative ideas.

Because the county seat in Yerington requires an hour and a half round trip drive from Fernley and Dayton, Wood said he want’s to make the recorder’s office more accessible to residents,  by taking advantage of electronic recording options allowed under NRS.

“Fernley, Silver Springs and Dayton are growing, and as we continue to grow, I’d like to make sure that we’re going to be more accessible to the rest of the county,” he said. “People shouldn’t have to necessarily drive to Yerington just to get their business done. We can actually do the recording of documents all the way up to the same level of recording and documenting things that the Secretary of State does.”

Wood said he made a promise to Warr that if he’s elected, he would never do things just because they’ve been done the same way in the past.

“Just because this is the way we’ve always done it doesn’t mean that’s the right way,” he said.

This year’s race is the first contested race for the recorder’s office in several years.

“For so long, it’s always been the next person in line,” Wood said. “But the budget for this office is more than half a million dollars, so it’s important to have fresh ideas and new leadership.