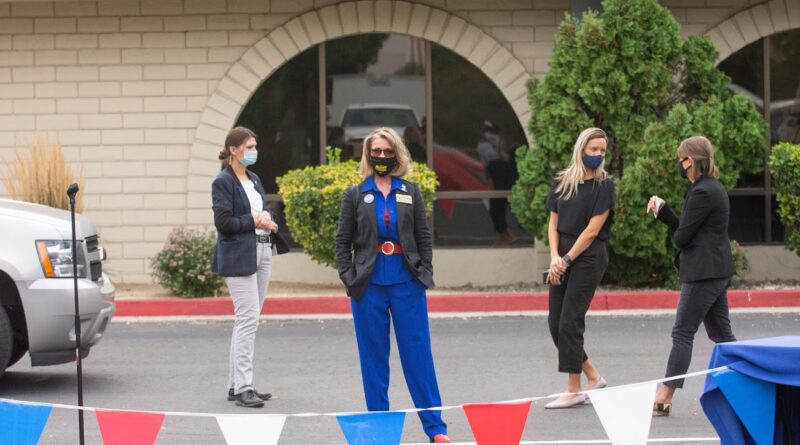 Wearing a bright yellow sweater in the same hue as her campaign signs, a masked Patricia Ackerman stood near a Biden-Harris campaign bus emblazoned with the words “Battle for the Soul of the Nation” not far from the Capitol building in Carson City on a recent Monday.

But the small group that turned out to pick up hand sanitizer and Biden-Harris yard signs and meet candidates like Ackerman was a far cry from a gathering a day earlier. That’s when her Republican opponent for the 2nd Congressional District, Rep. Mark Amodei, took the stage at the Carson City airport a few miles away and spoke to some 13,000 people packed together to see President Donald Trump for a freewheeling, 80-minute speech.

While her platforms have been much smaller, Ackerman said she still feels a path to victory in a Northern Nevada congressional district that a Democrat has never won in its 40 years of existence and where Republicans hold an 11-point registration advantage.

“This year can’t be compared to the other years. This is new territory,” she said in an interview as the bus idled in the background. “It’s actually getting a little overwhelming because we’re feeling so much grassroots fire and energy that is forming into this campaign.”

What’s heartening, she said, is the small-dollar donors who are giving $3, $5, $10. Those contributions — given largely through the Democratic online fundraising platform ActBlue — have driven a comparatively large campaign war chest for Ackerman’s 2020 run, amounting cumulatively to more than $391,000 as of the last federal filing period on Oct. 23.

It’s an amount that far outstrips other Democratic bids in the last two cycles, when Democrats in the district lost their races while their counterparts in the state’s more competitive races bested Republicans.

“This has clearly been the most intense one,” he said.

Koble and Evans ultimately lost their challenges to Amodei by margins of 16.5 and 21.4 percentage points, respectively.

But observers who came to meet the bus think Ackerman’s run feels different.

Entering the last month of the election with roughly $100,000 cash on hand, federal filings show Ackerman has funneled a vast majority of that money into advertising. In the first two weeks of October alone, she reported spending roughly $70,700 on advertising and printing services, or about three-quarters of the $92,795 she spent overall through that period.

It also marked the first such filing period in which Ackerman significantly outspent Amodei, who spent just $42,000 over the same two weeks. Amodei entered 2020 with more than $333,000 in his campaign’s coffers and, up until the third quarter of 2020, had largely outraised and outspent any potential rivals.

Still, these filings do not capture additional spending by Amodei in the last few weeks of the campaign, which include a likely pricey TV spot placed after the last televised presidential debate. Amodei entered the last days of the campaign with a massive cash advantage and a war chest 10 times the size of Ackerman’s — $436,000 to just $43,500, respectively.

Outside observers have, across the board, forecasted a clear Republican edge in District 2. The Cook Political Report, FiveThirtyEight and the University of Virginia Center for Politics have rated the district as “Solid R.”

And while forecasting final results through early-vote data remains difficult, partisan breakdowns of ballots returned so far in Washoe County — key to any potential Ackerman’s victory — show a Democratic lead of fewer than 2,400 votes as of Friday morning. It’s a number that has narrowed over the last two weeks as Republican in-person votes have gradually whittled at mailed-in Democratic votes, and it may narrow further depending on Election Day turnout.

A former stage actor and designer of indoor landscapes who now lives in Minden, Ackerman has an eclectic list of interests on her website, including horseback riding, high altitude climbing and organic gardening. While her proud proclamation that she’s in a two-Prius household and hewing to a plant-based diet may put her at odds with some in the deep-red, ranch-heavy rurals, she said she’s adept at finding common ground.

“We feel a path to victory,” she said. “Relationship-building comes easier to me I think than the average person. Again, that’s just my nature. I understand teamwork. I’m a retired climber. So as a high altitude climber you know what it’s like to rely on someone, otherwise you can lose your life. So I bring those skills and that ability to be able to work together toward that goal.”

After running an unsuccessful campaign for Assembly in a deeply Republican rural district in 2018, Ackerman’s campaign has been laser-focused on the issue of health care. She lost her own mother because of lack of access to adequate health care in rural Nevada; Ackerman was unable to find a doctor who would take a Medicare patient in a timely fashion, and her mother died a day before her scheduled appointment.

“Just like when Medicare and Social Security were first introduced, there’s bugs that have to be worked out. And let’s continue to build on that,” she said about the Affordable Care Act.

Amodei, a lawyer by trade who grew up in Carson City and is a former state legislator, has held the seat since 2011 and is well-known in the district. While he has taken moderate stances on some issues, including calling for a pathway to legal status for people living in the country illegally and opposing a project to store waste at Yucca Mountain, he voted with Republican Leader Rep. Kevin McCarthy 94 percent of the time in his current term.

“Mark had voted repeatedly to destroy the ACA. And the ACA is the only national law that actually protects pre existing conditions,” Ackerman said. “Currently, there has been no other option put on the table and that’s scary if you’re going to go and repeal something without something to protect people, that’s unconscionable.”

In an interview this week, Amodei defended his votes on the Affordable Care Act, and he said his position has been distorted. Amodei said he would like to keep some aspects of the bill in place, including protections for pre-existing conditions.

“I think we ought to keep the good stuff in the ACA,” he said. “And there’s plenty of other work to be done and we ought to be doing it instead of sitting there trying to rat each other out and out scream each other on talking points on health care.”

The district, which was created after the 1980 census and includes Reno and rural counties across northeastern Nevada, has a partisan lean toward Republicans of about seven percentage points greater than the nation as a whole, according to the Cook Political Report.

But buried within the district-wide view is a more nuanced picture, and Democratic consultants see a potential, albeit longshot, path to victory. Most of the Democrats who have won in the district have lost by more than 15 percentage points. But there have been some exceptions.

The closest a Democrat has ever come to winning was in 2006, when Jill Derby, a regent in the Nevada System of Higher Education, lost to then-Secretary of State Dean Heller by 5.4 points. And since then, the electorate in Washoe County, the most populous area of the district, has changed in a way that could give Democrats more of a chance.

But Washoe County is hard to predict with voters shifting their political allegiances, depending on specific candidates, and often splitting their tickets in presidential election years. In recent years, even when Republican presidential and gubernatorial candidates have lost in Washoe County, Republicans have not only held onto the congressional seat, but have won countywide.

And in a media landscape often consumed with partisan battles, especially in the race for the White House, Amodei has highlighted the fact that he’s a member of the Bipartisan Working Group, which has an equal number of Democratic and Republican members of the House.

While Amodei has continued to reach out to the Republican base by appearing at events like the Trump rally, he said he has run a campaign meant to appeal to a wide swath of voters. While his social media activity is sparse, he does a weekly “Minute with Mark” radio segment, which also includes versions in Spanish, and publishes an e-newsletter that captures his folksy snark.

“I would never dream of running a campaign that says, ‘It’s a Republican district and I’m a Republican,’” Amodei said. “That, quite frankly, is every bit as shallow of what I’ve been critical of the campaign process in general on.”

Kimi Cole, a rural liaison and coordinator for the Ackerman campaign, said that the campaign has worked to use a variety of channels to connect with voters during the pandemic, including in outlying areas.

In the past, campaigns were more focused on “retail politics;” this time, Ackerman’s Twitter and Facebook feeds are full of video testimonials from Democratic veterans calling for improvements to the VA and Ackerman herself promising to be a representative for the district who is “actually going to work for a change.”

“There is a social media strategy this time,” Cole said.

Catherine Byrne, the state controller, said she thinks Ackerman may have built up something of a base and name recognition from running last cycle for a Douglas County Assembly seat held by Jim Wheeler. But she said she thinks sexism and anti-California sentiment in rural areas is working against Ackerman, who previously lived in California.

Like others observing the race, she thinks narrowing the gap would be a victory in and of itself. It’s a philosophy taken by Deborah Chang, the Democratic candidate who is following in Ackerman’s footsteps by running a long-shot bid this cycle for Wheeler’s seat, even though Wheeler got twice as many votes as Ackerman in 2018.

“There’s still a message to be offered and also some points to be made that some of the more conservative policies actually don’t benefit the people,” Chang said. “I think it’s going to take some time for more progressive ideas to be considered. And it might take a couple of election cycles, or maybe even a couple generations.”

One thought on “Democrats in 2nd District face long odds even as culture shifts, campaigns get more sophisticated”