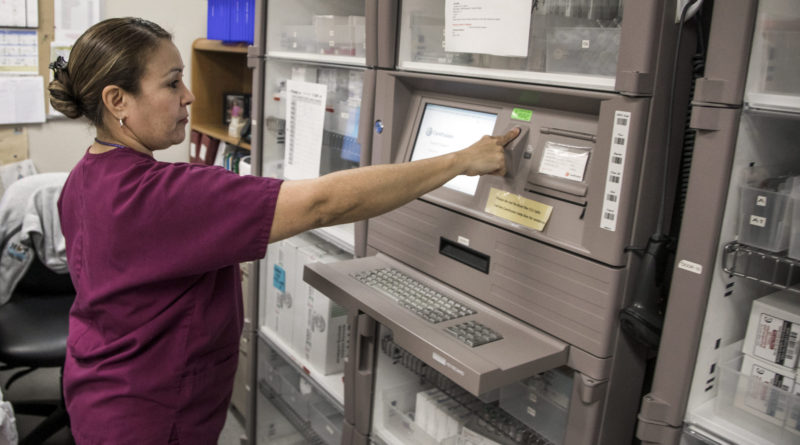 It’s been nearly two months since a law requiring doctors to take additional steps before writing prescriptions for opioids went into effect, though some of the questions and concerns raised by doctors about the law are only now just starting to be answered.

A subcommittee formed specifically to address concerns related to the implementation of the law grappled with some of the areas of uncertainty at a recent meeting with the goal of ultimately clarifying the exact steps doctors must take when writing a prescription for painkillers and figuring out what punishment they should face should they fail to do so. But to what extent that clarification can or should be codified into state regulations will be up to the Board of Pharmacy, which will discuss the matter at a meeting early next month.

The new law, which went into effect on Jan. 1, requires prescribers to obtain and review a patient’s medical records (or make a “good faith effort” to do so), conduct a physical examination, assess a patient’s mental health and the risk of addiction, discuss alternative treatment options and obtain a written, informed consent before writing an initial, 14-day-or-less prescription for opioids. There are extra requirements for prescribers writing prescriptions over a longer time frame as part of an ongoing course of treatment, including entering into a prescription medication agreement with a patient, determining an evidenced-based diagnosis for pain and considering referring the patient to a pain management specialist.

The subcommittee came up with a handful of recommendations at its first meeting last month with the aim of resolving concerns about when informed consents need to be obtained and what it means to make a “good faith effort” to obtain a patient’s medical history. The panel will meet again next week to consider further recommendations.

Though the law, AB474, applies to any prescriber of opioids — from advanced practice registered nurses to dentists — most of the concerns about the law have come from medical doctors, who have lamented the extra time obtaining an informed consent and making a “good faith effort” to obtain a patient’s medical records. Some have even said they won’t write any more prescriptions for painkillers in response to the law and will direct patients instead to pain doctors.

“The consequence of this law is forcing primary care to choose to send all these patients to pain specialist doctors to deal with the consequences of AB474 and that’s not the best way to practice medicine,” said Dr. Rudy Manthei, an opthamologist, at the recent subcommittee meeting. “It’s just the opposite.”

Doctors who showed up to a Board of Medical Examiners’ workshop in early January balked at proposed regulations to impose disciplinary measures, including license revocation, on them for failing to follow the law. The doctors at the workshop argued against moving forward with the regulations, with some saying the law is hazy at best and impossible to follow at worst.

And the concern hasn’t gone away since then.

“Somebody in my office today while we were talking about her pain medicine, her impression was we’re cutting down the forest to save the trees,” said Sen. Joe Hardy, a physician by trade, at the recent subcommittee meeting. “That is somewhat a feeling that people are having in the community. The patients are concerned. The physicians are concerned.”

Dave Wuest, deputy executive secretary of the Board of Pharmacy and one of the subcommittee members, said that his board is “excited” to work with the subcommittee and that the board’s staff would “certainly” consider their recommendations to bring before the full board.

One recommendation specifically addresses a concern about whether doctors in the same group practice are each required to obtain an informed consent from a patient if they are continuing the same course of treatment for the patient. For instance, if a woman comes in with chronic back pain, sees one doctor one month and receives a prescription for opioids but needs to see a different doctor in the same practice group the next month for a follow-up appointment, doctors argue that they shouldn’t need two different informed consent documents.

Or, as Hardy put it: “The patient is primordial in all of the discussions.”

They also recommended that a “course of treatment” should include both the initial disease being treated and anything secondary to it. That means if a patient comes in for a broken leg and later developed an infection related to it, both could be treated under the same informed consent document.

The subcommittee also hoped to create some specificity about what it means to make a “good faith effort” to obtain and review the patient’s medical records from any other health-care provider. Doctors on the subcommittee said getting records from other offices can be extremely difficult and time-consuming, and recommended that checking the state’s prescription drug monitoring program system, which tracks prescriptions for controlled substances, should be the minimum level of effort required to make a “good faith effort.”

Other issues that either the subcommittee or Board of Pharmacy could take up in the future include defining “acute pain” and any other further clarification of “course of treatment, “initial prescription,” “written informed consent” and “good faith effort” necessary. Whatever regulations come out of the Board of Pharmacy’s March meeting would need to be reviewed by legislative lawyers, receive final approval from the board and then be approved by the Legislative Commission.

It is also unclear whether the Board of Pharmacy has the authority to adopt regulations clarifying one section of the bill that appears to apply to all prescribers of controlled substances, not just those for the treatment of pain. A representative from the office of Gov. Brian Sandoval, who spearheaded the bill, testified during a January meeting of the Legislature’s interim health-care committee that the section only applied to pain prescriptions but in a later email to committee members corrected that it indeed applies to all controlled substances.

The Nevada State Medical Association and others are seeking clarity from legislative lawyers on the intent of that section, whether it was meant to apply to all controlled substance prescriptions or only those for the treatment of pain.

At the end of the day, the goal is to have one overarching set of regulations on prescribing that will clarify the issues raised primarily by the doctors but will address concerns from any prescribers affected by the law. It will then be up to individual licensing boards to decide if they believe it is necessary to adopt disciplinary regulations beyond what they already have in place.

“We’re working very closely with the other boards. It doesn’t make sense for them to have one concept and for us to have another concept,” Wuest told a legislative committee on Tuesday. “The goal is to come to one consensus from Nevada citizens.”