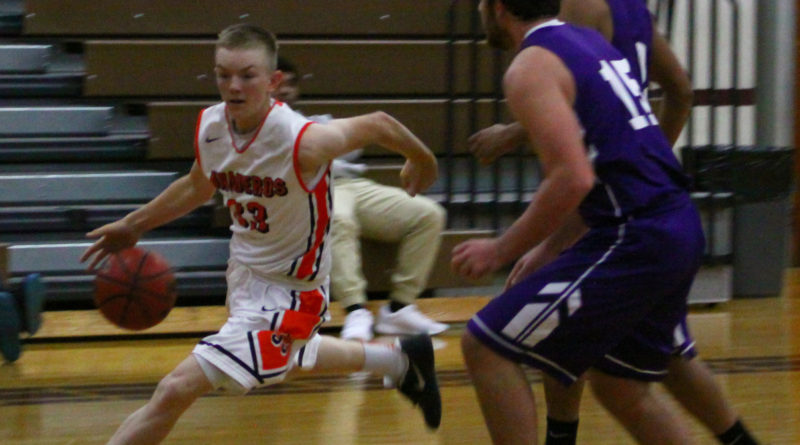 For the second time in less than a week, the Fernley High School boys basketball team beat one of its Lyon County rivals.

The Vaqueros beat Yerington 64-53 Tuesday afternoon in the Rail City Classic in Sparks. They had beaten Yerington 60-53 last Thursday.

“We looked like we were in a sugar coma,” coach Derek Miller said.

Having slogged through the second half Monday, Miller said his goal for Tuesday was for the Vaqueros to play four good quarters. After trailing in the first quarter, the Vaqueros surged in the last three.

Fernley scored eight straight points after Yerington drew within 36-34 on a dunk by Koby Foster with 5:40 left in the third quarter, with six of the points on 3-pointers by Ethan Hunter.

Fernley methodically pulled away through the fourth quarter, to as much as a 62-46 lead on a 3-pointer by Zach Burns with 4:42 left in the game, before going into ball control mode.

David McFalls got Yerington off to a hot start, scoring 11 points in the first quarter as Yerington opened up an 18-13 lead.

But the Vaqueros held Yerington to 9 in the second quarter, while getting hot from the perimeter. Drake Howe hit two threes and Burns, Joe Ellis and Dario Ceresola each hit one in the quarter as Fernley turned the 5-point deficit into a 34-27 lead,

Hunter’s two key 3-pointers in the third quarter helped Fernley begin to pull away, and he wound up leading the Vaqueros with 5 points, on five 3-pointers.

“We got Ethan Hunter going, and I’ve been waiting for that,” Miller said.

Miller said Joe Ellis also gave the Vaqueros good minutes off the bench, after missing last week’s game against Yerington after having a wisdom tooth removed.

This is the first time under Miller the Vaqueros have played in a tournament after Christmas, and he’s hoping it helps the team stay in rhythm when league play resumes next week.

First, though, the Vaqueros face Lassen on Wednesday. Lassen lost to North Valleys 63-52 on Monday, then beat Sparks 38-37 Tuesday morning.