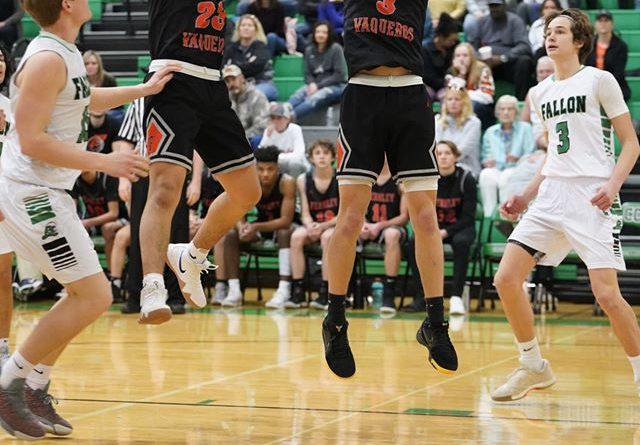 The Fernley High School boys basketball team’s four-game winning streak came to an end Saturday, but this week offers them a chance to continue their climb up the league standings.

The Vaqueros lost 58-41 at Fallon last Tuesday, falling back to 5-5 in league play after they had gotten above the .500 mark for the first time.

But the Vaqueros still remain in fifth place and have two good chances this week to solidify their standings, playing at Dayton Tuesday night, and hosting Spring Creek Friday, before facing undefeated league-leading Elko Saturday afternoon.

The Vaqueros hung much tougher against Fallon, the defending 3A state champions, than they did in an 81-53 loss in the teams’ first meeting Dec. 14.

By outscoring the Vaqueros 20-12 in the first quarter, Fallon played from in front throughout, but wasn’t able to put he game out of reach until going on a 16-6 run in the third quarter.

Carson Kingston led the Vaqueros with 15 points, but was the only Fernley player in double figures.

The Vaqueros hit 40 percent of their shots from the floor, 17 of 43, but got to the free throw line for only six attempts, making three. They were also outrebounded 25-20, and committed 20 turnovers.

“We made too many mistakes to beat a good Fallon team,” coach Derek Miller said. “They beat us in every facet of the game. We have to learn from it and get back to work.”