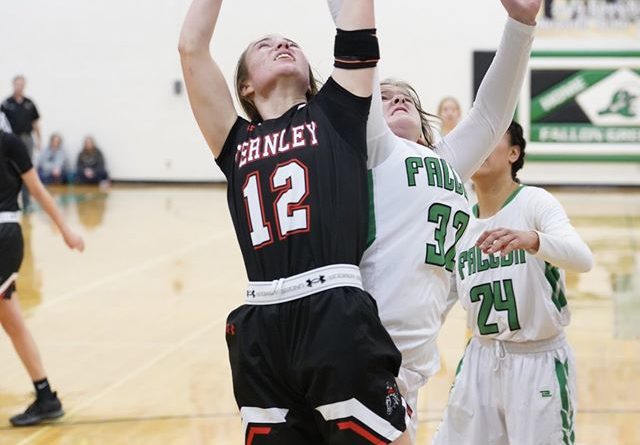 Slow and steady was the winning formula Saturday as the Fernley High School girls basketball team ran its record to 12-0 in the Northern 3A with a 62-41 win over Fallon.

The Vaqueros, which play at Dayton Tuesday, extended their league lead to two-and-a-half games over Truckee and Lowry, which are tied at 9-2.

But where they’ve used a big run in recent games to put away opponents, this time the Vaqueros pulled away methodically without the benefit of an explosive burst.

“(The girls) started off slow the first five possessions making the wrong reads but, then they settled down and they started doing things right,” coach Tom Kingston said.

Fallon stayed within striking distance of Fernley during the first half, trailing by only nine at halftime and already matching its game total in points from the first meeting (58-23).

For the Vaqueros, Jaiden Sullivan was hot from long distance early in the game and posted a game-high 17 points and Willow Jacobsen had 14. Karli Burns scored 10 points, and Katelyn Bunyard and Celeste Condie each had seven.

The deficit in the first quarter never grew greater than five points for Fallon after Sharron’s jumper and Hitchcock’s putback kept the game to within three points with 3 minutes left. Jacobsen’s pair of free throws increased Fernley’s lead back to five going into the second quarter.

Jacobsen, who started the 8-0 run toward the end of the first frame, capped off the run with a basket at the 5:37 mark to give Fernley a 22-11 lead. Fallon, though and unlike the first encounter, clawed back thanks to Aisha Sharron and Makenzee Moretto, who cut the gap to seven (22-15). Moretto traded baskets with Fernley on the next two possessions for each team and Condie’s three-point play put Fernley back ahead by 11 with 1:53 left in the half. Sharron’s two free throws and Moretto’s fast-break score narrowed it down to 30-23 before Jacobsen’s layup in 21 seconds left gave Fernley a nine-point lead at halftime.

Both teams traded scores to begin the third quarter and Fernley slowly started to pull away after Sullivan’s trey gave Fernley its largest lead of 12 points with 4:30 to go. Missed shots plagued Fallon during the game, especially in the third quarter, and Fernley had problems taking advantage from the free throw line where the Vaqueros shot 7 of 22, including a pair of misses from Jacobsen and Burns toward the end of the third quarter. Bunyard’s 3-pointer in the corner with 4 seconds left gave Fernley a 48-31 lead heading into the fourth quarter.

“It was not a good game from the free throw line as a whole,” Kingston said. “It was just one of those games we were off but, we still scored well from other aspects of the game.”

Burns opened the final quarter with a 3 in the corner, like Bunyard, and Condie’s free throw elevated the lead to 21 points with 6:32 left in the game. Fallon, though, battled back with Hitchcock and Whitaker each scoring four points in the next two minutes. Senior Kinsli Rogne’s steal lead to Whitaker laying it in to cut the deficit to 54-39, prompting a Fernley timeout.

Moretto sunk both free throws with 3:37 left to slice the lead to 13 points (54-41) but the Vaqueros scored the game’s final eight points to ice their 12th league win of the year.

Fallon kept Fernley in relative check, compared to the team’s first meeting, by playing a zone defense for most of the game. Fernley, meanwhile, played a mix of defenses, which Kingston said was orchestrated by assistant coach Ralph Dunn.

“Coach Dunn has been doing an outstanding job of mixing up the defense of coverage,” Kingston said.