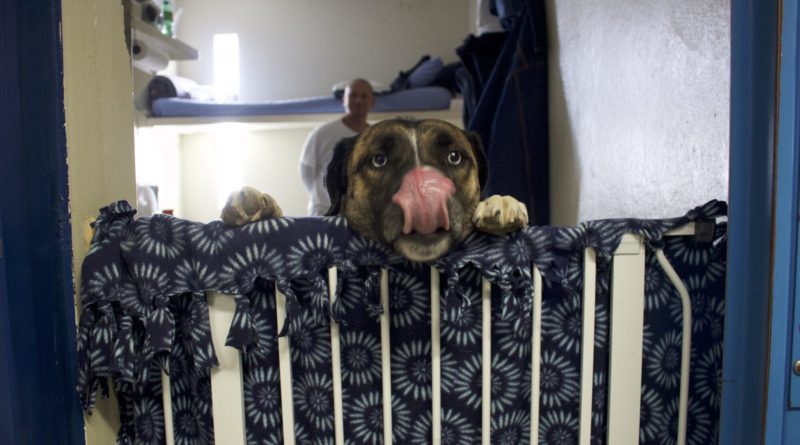 Dressed in navy blue pants and a denim shirt, his rolled-up sleeves revealing tattoos, an inmate brushed away tears during a prison graduation ceremony on a recent Wednesday morning.

He had spent weeks training a dog within the confines of the Lovelock Correctional Center (LCC). Now, he had to hand it off to new owners. A beagle, a chihuahua, and a husky named Zeus were among 14 rescued dogs from Las Vegas trained by 30 inmates at the Lovelock Correctional Center (LCC) and given to 11 veterans and first responders at the ceremony.

What’s known as the “three P” program — Puppies, Prisoners and Patriots — is a collaboration between the LCC and a non-profit organization based in Las Vegas called Those Left Behind. The purpose of the program is to rehabilitate dogs rescued by the organization from high-kill shelters — sometimes when they’re on the brink of being euthanized — and have inmates, or handlers, train them to become emotional support dogs for veterans and first responders.

The program has a profound effect on rehabilitating not just the neglected dogs, but also the inmates who train them and the veterans and first responders who get to take them home, according to prison officials and the inmates themselves.

“The ‘three P’ program has really changed life here at the Lovelock Correctional Center,” one inmate, who prison officials said they are not identifying because of the nature of his crime, but who The Nevada Independent is calling John Smith, said during his speech at the graduation. “During its short time in existence, it lifted the spirits of everyone, even the inmates that are not active participants.”

Warden Renee Baker said she and her team from the facility go through an extensive selection process to choose the inmates who get the privilege of training the dogs and living in a separate unit for the program.

The “Three P” unit is covered with artwork from the inmates, including dog paw prints alongside the names of every single dog that has graduated from the program scaling the wall to the second floor of the unit.

‘In a living purgatory’

The correctional center is about nine miles north of Lovelock and blends into the colors of the sage and mountains around it. The graduation ceremony was held in the section of the prison where inmates get to see their visitors.

The dogs are walked daily by their inmate handlers and sleep alongside them inside their cells. The non-profit organization visits the correctional center every few weeks to teach the inmates how to properly train their dogs and how to deal with any stress or emotional issues the dogs may be facing.

The program began in July 2018 and has since trained a total of 47 dogs to be adopted and two have been trained to help children with autism. The inmates spend 12 to 17 weeks training their dogs before giving them up for adoption.

The weeks of training come to a head at a graduation ceremony where the inmate handlers get to say goodbye and celebrate all that they, and their dogs, have accomplished.

There were cakes and refreshments inside the ceremony room, where the adoptive families sat among the inmates. Among them was Sherri Canter, a mine rescue worker from Winnemucca, who was there to adopt a chihuahua and a beagle for her parents. She said she was excited to get them to their family’s land where the dogs could run free and explore alongside their cats and horses.

A major theme at the event was the impact of the program on the inmates, who discovered they could relate to these dogs more than they had expected to.

“We see a reflection of ourselves in our dogs,” Smith said. “They enter a world having witnessed the darkness of human nature. They are often damaged and broken, just as many of us see ourselves.”

While the purpose of the program is for the dogs to go through training, the inmates said they feel that they learn just as much, if not more, from their dogs.

The inmate who gave the graduation speech said the dogs taught him and the others about empathy, patience, adaptability and to take responsibility for something other than themselves.

“The ‘Three P’ program has taught us many things that go far beyond these prison gates,” Smith said. “Being in prison can be like being adrift in a living purgatory — we regret our past and fear our futures and are left with an ocean of time to think about both without being able to do much about either. This program gives us a goal for each day and pride in having helped save a life.”

Wednesday was the facility’s fifth graduation ceremony, but the first time that inmates were able to shake hands with the adoptive families and individuals before saying goodbye to their dogs. Inmates mentioned how difficult it is to let go even though they know from the beginning that their dogs are destined for another home.

“Many trainers said they will not allow themselves to get attached to their dog, so it will not hurt so much to say goodbye when they go, but that never works,” Smith said. “We share in their every victory and are there for them when they are haunted by ghosts from their past. We see them grow and hopefully get them to the point where they do not need us anymore.”

Eight new dogs, among which are a husky and a black lab, were already at the facility, ready to replace the beloved dogs the inmates had just spent months training.

“During our time together, we teach them the skills they will need to live a life of purpose and meaning,” Smith said. “They shatter our hearts every time, they take a piece with them when they go. Then we pick up the pieces and do it all over again.”