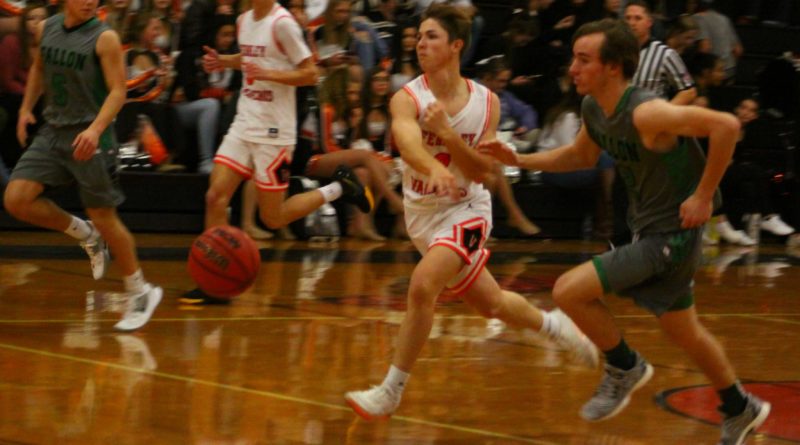 For a little more than two quarters, the Fernley boys basketball team was staying close enough to the defending state champions to have hopes of taking the game to the wire.

After Fernley scored the first two baskets of the third quarter to get within 11, Fallon scored 15 consecutive points in a span of 2:24, carrying the Greenwave to an 81-53 win Saturday afternoon in Fernley.

It was the second consecutive lopsided loss to open league play for the Vaqueros, who are playing shorthanded at least until after the Christmas break.

“I thought we made some progress tonight in some areas, but it’s a process,” coach Derek Miller said. “We’ve got young guys that haven’t played a lot of varsity basketball, and they’re just going to continue to get better.”

Carson Kingston, who led the Vaqueros with 23 points, scored the first two baskets of the second half to cut Fallon’s lead to 42-31.

But Thomas Steele scored inside with 6:32 left in the quarter, then followed up with a 3-pointer, kicking off a 15-0 run to balloon the lead to 57-31.

The game was competitive through the first 17 minutes, but Fallon built its edge on the strength of its work on the glass. For the game, Fallon grabbed 17 offensive rebounds, and it was converting on many of those extra possession s that allowed the Greenwave to extend a 16-10 first quarter advantage to 42-27 at the half.

“You get a stop and you give a team second and third, sometimes four opportunities, it doesn’t bode well for you,” Miller said. “That’s the defending state champs and they have one of the best players in the North, and you can’t give them two or three opportunities.”

That player, Elijah Jackson, led all scorers with 27 points, getting to the rim almost at will and creating multiple opportunities from the foul line. Steele added 18 for Fallon, even though neither Jackson or Steele played in the fourth quarter.

Tucker Hall was the second Fernley player in double figures with 10, while Justin Hyman scored 7 and both Jonah Turner and Daunte Ceresola scored 6.

The Vaqueros returned five of their top six players from last season’s team, but two of them, Drew Miller and Isaac O’Neill, haven’t yet played this season. Miller is out with a broken ankle, and O’Neill has a broken bone in his foot that required surgery, and the Vaqueros hope both will be back sometime in January.

In the meantime, the Vaqueros are relying on a bunch of players who were on the JV team last year and still finding out how to play varsity basketball.

“I’m seeing improvements every week, just nose to the grindstone and keep working,” Miller said. “We competed, but it’s just things we got to take care of, and it just takes time.”

The Vaqueros, who are 1-4 overall and 0-2 in the Northern 3A, will be in action three consecutive days next week. Tuesday’s game against North Valleys has been moved to Thursday because Washoe County does not let its teams travel during final exams. Friday they play in Spring Creek, and Saturday they will play at Elko.

“The little things are adding up to L’s for us right now because we’re just not taking care of the basketball, not making good passes,” Miller said. “But I truly believe when we get everybody back and healthy, we’re going to be a pretty tough team, but other guys have got to play right now and stay the course.”