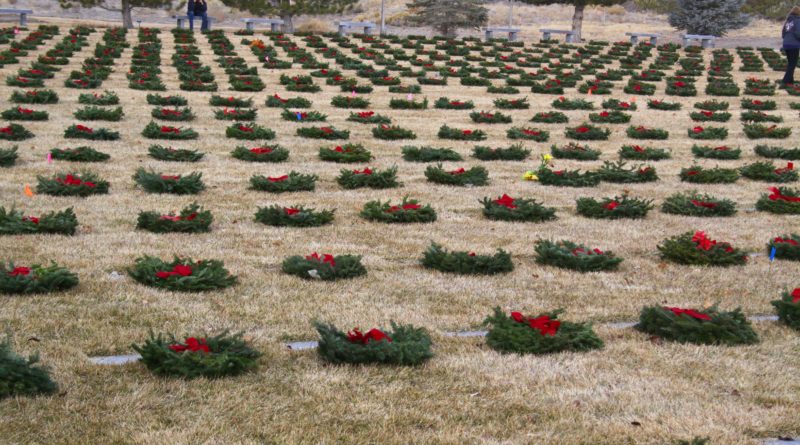 Hundreds of people filed toward the cemetery’s pavilion and plaza on a cold morning, prepared to help place thousands of wreaths on veterans’ graves. More than 2,400 volunteers attended the annual Wreaths Across America remembrance on Saturday at the Northern Nevada Veterans Memorial Cemetery to honor men and woman who served in the armed forces during peacetime and war.

Over the years, Wreaths Across America has grown in importance at national, state and local cemeteries that are the final resting place for millions of veterans, including 130,000 buried in 24 American military cemeteries in 10 countries.

Retired educator Lisa Kent of Fallon knows too well the sacrifices servicemen and women have endured. Her father, a soldier in the U.S. Army during World War II, was captured by the Japanese in the Philippines and held in a prisoner-of-war camp in Japan.

“Mom and dad are both buried here, so I have come out for the last four years since mom passed away,” Kent said.

Kent said both parents moved to Fallon for the last years of their lives.

“They chose to be buried here,” she said.

Kent, like many other visitors to the NNVMC, said she’s surprised by the increasing number of people who attend the Fernley event.

“Wreaths Across America is totally amazing,” she said. “I even ordered a couple of wreaths for the Riverside (Calif.) cemetery because my uncle is buried there. I just think it’s a great, meaningful way to remember our service people and families.”

Kent, though, said President Ronald Reagan’s comments about freedom have resonated with her over the years.

“Freedom is never more than one generation away from extinction,” the 40thpresident said. “We didn’t pass it to our children in the bloodstream. It must be fought for, protected, and handed on for them to do the same, or one day we will spend our sunset years telling our children and our children’s children what it was once like in the United States where men were free.”

For the sixth consecutive year, the Nevada Veterans Coalition received donations to buy wreath for all 8,700 veterans who are interred at the cemetery.

Pam Hucke said her everyday freedoms are a result of the sacrifices performed by the men and women who are not only buried at the NNVMC but also at other cemeteries.

“I appreciate them every day … I fly my flag every day,” Hucke said. “I want to be here to show my appreciation.”

Tom Draughon, a Navy Vietnam veteran, a member of the Nevada Veterans Coalition and narrator for the event, read from a script that was delivered at the same time at cemeteries across the United States. He said the freedoms people enjoy have come at a price from men and women who gave their lives.

“We can worship as we see fit,” Draughon said. “We can raise our children to believe as we do. We can travel from one end of this great nation to the other and not have to ask permission to go. We are free to vote for whomever we feel should be in government office, with no explanation needed. We have the right to succeed and we have the right to fail at whatever endeavor we wish to pursue.”

Draughon said the United States is among the first nations to support freedom of people from around the world. He said many men and women have answered the call to serve their country in one of the branches of the military.

Naval Air Station Fallon and the Naval Aviation Warfighting Development Center had a strong presence for Wreaths Across America. Command Master Chief Isaiah Marauta said 33 sailors volunteered to be part of the event.

“It’s a good experience for them,” he said. “Some have never laid a wreath, but once they do this the first time, they want to come back. It shows the young sailors the sacrifices of the veterans before us, and then (for them) to pass it to future generations.”

Marauta said he encourages the sailors to read the inscription on the headstones to learn more about the veteran and to envision the service that person performed.

Retired Lt. Col. Henry “Hank” Whole is one of the volunteer advisers of the Fallon Division Sea Cadets, a youth program for Fallon and Fernley students. Every year, Sea Cadets attend Wreaths Across America to lay wreaths and to take part in a ceremony to place wreaths at the flags of each military branch.

“We give them a broad perspective of all the services,” he said of the Sea Cadet’s program, which teaches the participants integrity and leadership.

Several Sea Cadets placed wreaths at the columbarium wall at the cemetery’s northern edge. Eliana Barbant and Alena Perez said they doesn’t know anyone buried at the NNVMC, bur Barbant said being at the remembrance event means “the world.” True Brabant said her great uncle, who was a Marine sergeant, is buried at the NNVMC. She delivered a wreath for him on Saturday.

U.S. Air Force veteran Michael Parsons served during the Vietnam War and also completed two tours at Kadena Air Base, Okinawa, with the SR-71 Blackbird, a long-range, high-altitude strategic reconnaissance aircraft. A native of Springfield, Ohio, he fell in love with the West after completing a tour at Beale Air Force Base near Marysville, Calif.

When Parsons walks along the rows in the cemetery, he likes to stop and read names on the headstone. He considers himself fond of the World War II veterans.

“I like to see them remembered because I consider that generation to be the golden generation of the 1940s,” he pointed out.

Deborah McGifford of Dayton was at the ceremony to place a wreath on the grave of her husband, U.S. Marine Staff Sgt. James McGifford, who served as an avionics engineer.

“We were married 36 and a half years, and I lost him five years ago due to an accident, Deborah McGifford said.

Deborah, from Alabama, met James, who was from Oregon, at Perris Island while she was visiting her brother, who was also a Marine.

“Visiting my brother, I met my husband. I met and married this guy within three weeks,” she said.

The couple retired to Dayton, and had two children, who both served in military, a daughter who served in the Navy, and son in the Marine Corps, who is currently in Okinawa.

NVC President Brett Palmer said the days leading up to this year’s Wreaths Across America were good. He said more than 100 volunteers helped unload boxes of wreaths on Friday and then placed boxes at strategic places around the cemetery.

“The response from families and the public in general has been great,” he said. “We had a good military presence out here.”