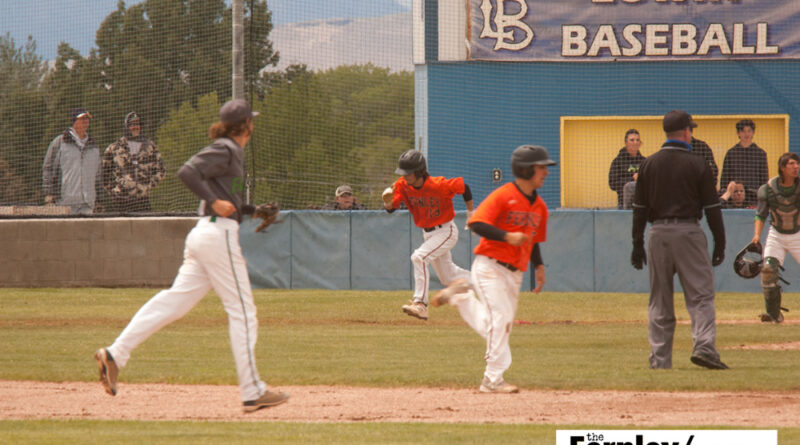 The Fernley baseball team’s hopes of winning a league championship in this Covid-shortened season ended in heartbreaking fashion, as the Vaqueros lost 14-13 to Fallon in a semifinal game of the Northern 3A East Tournament in Winnemucca last Saturday.

“It just sucks that we turned out on the wrong side of a one-run game,” coach Stan Pryor said. “It was super heartbreaking, but you’d rather go out that way than getting beat up on.”

Fernley trailed 11-7 going to the bottom of the fifth, but scored six times in the inning. The first run scored on an error, then Tucker Hall singled in a run to make it 11-9. Two batters later, Austin Pryor singled to left field, driving in two runs to tie the game, and Brandon McCullar capped the rally with his own two-run single to left field.

Fallon had opened up the lead with four runs each in the fourth and fifth innings. Trailing 6-3 in the fourth, the Greenwave scored on a passed ball, a two-run single and a sacrifice fly. Fernley tied the game at 7-7 in the bottom of the fourth on a sacrifice fly by Hall, but Fallon used six singles to manufacture four runs in the top of the fifth, to take that 11-7 lead.

Both teams scored on run in the first, on a single by Bryce Adams for Fallon in the top of the inning, and on a single by Pryor in the bottom half to tie the game.

Fernley scored a run on a ground out in the second to lead 2-1, but Fallon struck back for two runs in the top of the third and led 3-2.

“It was one of those really stressful, dramatic games like you would see on TV,” Stan Pryor said. “I couldn’t ask much more from the kids. It was one of the better games I’ve been a part of in my life.”

The game was originally scheduled to be played at 9 a.m. that morning, but was pushed back by several hours because of the weather. The Spring Creek/Fallon game Friday night had been suspended because of rain and lightning, and was resumed Saturday morning. Fallon wound up winning that game, 8-7.

Fallon advanced to the championship game against Dayton, which was suspended Saturday evening and completed Tuesday in Fernley, with Fallon winning 5-2.

That made their loss even more disappointing, Pryor said, realizing it could have been them hoisting the trophy.

“These seniors have been playing together since they were itty bitty,” Pryor said.