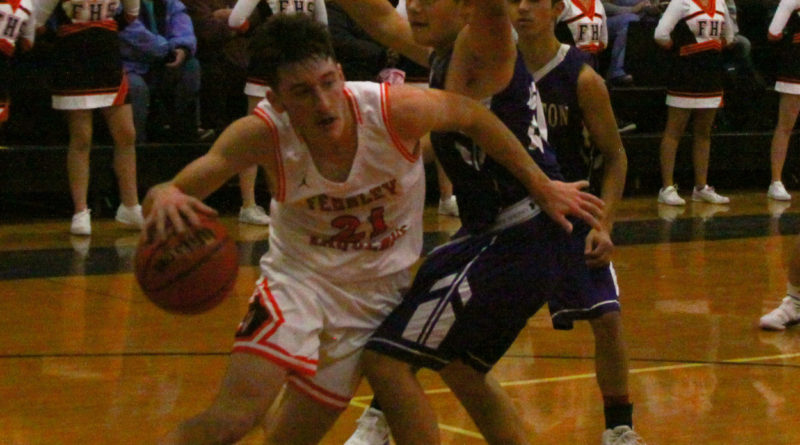 After holding on for a narrow win over Yerington last Thursday, the Fernley High School boys basketball team is back in action this week at the Rail City Classic in Sparks.

The Vaqueros open the tournament at 8 p.m. Wednesday against Selma (Calif.), play Antioch (Calif.) Thursday at 5 p.m. and North Valleys Friday at 3:30 p.m., and they may have to do it without their best player.

Senior guard Zach Burns suffered an ankle injury in the first half of Thursdays win over Yerington. After Burns left the game, the Vaqueros saw Yerington rally from a 36-11 deficit, and held on for the win only when a last second 3-point shot bounced off the backboard and the rim.

The Vaqueros, and more specifically junior Rei Robinett, came out on fire from the perimeter. Robinett  hit three 3-pointers and scored 18 points in the first quarter. His last three of the quarter made it 27-11, and a basket by Robinett with 4:32 left in the second quarter extended Fernley’s lead to 36-11.

But in the midst of that big run, Burns appeared the roll his ankle on a drive to the basket and crawled off the floor in pain.

David McFalls and Kevin Kirk led the charge, scoring 40 of Yerington’s 58 points in the last three quarters. McFalls hit a 3-pointer with 5:52 left in the third to cut the margin to single digits. The Vaqueros briefly stabilized, with a 3-pointer by Jay King and baskets by Russ Ortiz and Zac Terra pushing the advantage back to 57-43 after three quarters.

“Mentally the kids kind of just stopped,” coach Derek Miller said. “I think we looked at the scoreboard and figured we were going to get a coaster, and it doesn’t work like that.”

Fernley still led by 15, at 67-52, when Dario Ceresola scored with 5:04 left in the game, but Justin Ramirez hit a free throw, McFalls scored a basket and Kirk hit two free throws and a 3-pointer, and it was suddenly 67-60 with 3:38 to play. Ceresola ended a four-minute Vaqueros drought with a basket with 1:54 left, but McFalls hit a driving basket, then a 3-pointer, to cut it to 69-65 with 28 seconds left.

Terra made it a 3-point game with a free throw with 3.1 seconds left, and McFalls shot at a tying 3-pointer from just inside halfcourt missed at the buzzer.

“We just didn’t play any defense,” Miller said. “We were awful. McFalls get by someone, or Kirk, and there was no one there. Everything we’ve been working on, they didn’t do.”

Burns spent the rest of the game in the locker room with ice on his ankle, and left the gym on crutches. Miller said the Vaqueros need to prepare to play without Burns, but the tournament this week will give some younger players a chance to prove themselves.

“I’m sure he’ll be a while,” Miller said. “Hopefully we can get him back sooner than later, but some of the younger guys are going to have to step up and get after it.”

“We have a tendency when we start shooting well we don’t work the ball inside out, and it was funny because when they were in man we scored all we wanted, and then when they went to a zone, normally we should get looks, and we just didn’t move the ball well and I thought we just kind of made poor decisions with the basketball,” Miller said

McFalls had 29 for Yerington, and Kirk scored 19.