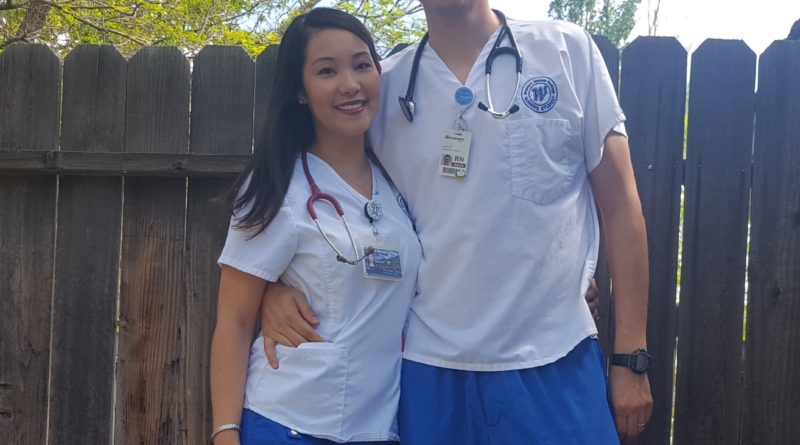 One couple is taking the meaning of “sharing a life together” to another level.

A common desire to help others led the young couple to pursue admission into Western Nevada College’s nursing program three years ago. Jessie graduated with an Associate of Applied Science Degree in Nursing in 2017 and Katia received the same degree at the WNC’s commencement ceremony on Monday, May 21.

In order to make their career aspirations come true, Katia and Jessie moved from their comfortable surroundings of Las Vegas, leaving behind friends and family to make a new life in Carson City.

“When we moved from Las Vegas we weren’t used to a smaller town and it felt kind of depressing with no friends and family here,” Jessie said.

But the fact that they had each other and a common goal made the transition easier.

“The nursing program is a demanding program where you have to spend extra time studying and doing homework, and most of the time you feel you don’t have time to do something else,” Katia said. “The idea of being always busy and living in a place where you do not know anybody and adding the adaptation to new weather was challenging. I can say that we spent a lot of time together during this program studying! Surviving nursing school was possible for both of us because we are really supportive to each other.”

At the height of their hectic schedules, the couple bought a large calendar so they could pinpoint when they would have time for each other.

“At the beginning was hard, because Jessie was always busy with school, and we did not have a lot of free time for us, but after he graduated it’s been getting better. Now, he has more free time to go out,” she said. “I believed the keys of our relationship during nursing school are love and communication because we always knew what was happening to us, and what things we had to do every day, so we were really supportive of each other.”

Being a year behind Jessie has created some benefits for Katia. Jessie’s familiarity with the coursework and professors has enabled him to help Katia during her final year of nursing school.

“Since we got almost the same professors I was able to let Katia know the most important things to focus on when testing and also provide some tips on how to get prepared and perform during clinical rotations,” Jessie said.

With their unusual back-to-back graduations in nursing, they are thankful and appreciative to the mentors responsible for preparing them for their chosen careers.

“We are extremely impressed and thankful by the nursing faculty staff that really take their jobs seriously and push you to the edge so you can grasp and apply nursing in its best way,” Katia said. “WNC’s nursing program taught us that we can be a better person and make a difference every day. Also, all the stressful moments during the nursing program were worth it at the end of the day because we grew up as a couple. Now, we know if we are passing through difficult times, we are going to be there to overcoming it together.”

Katia developed a passion for health care because she saw how rewarding the profession was for her mother. Her mother worked as a primary physician in Mexico and served as a caregiver for Katia’s great grandparents.

Jessie decided that he wanted a career devoted to helping others despite previously earning associate degree in business that didn’t spark a passion professionally.

“We are caring, compassionate and hard workers, and the nursing degree offered us the opportunity to care and help others, and we plan to do it for the rest of our lives,” Katia said.

Since graduating, Jessie is working full time at Renown South Meadows Medical Center in Reno, as well as per diem in Behavioral Health Services at Carson Tahoe Health. He also has “time” to take classes from Nevada State College to work toward his bachelor’s degree so he can someday become a nurse practitioner. He recently learned that he has been named a recipient of the DAISY Award, which honors extraordinary nurses.

Katia plans to start working toward her Bachelor of Science degree in nursing through Nevada State College in the fall and continue with classes to become a nurse anesthetist.

Their experiences over the past three years have strengthened their friendship and love for one another.

“We felt stronger as a couple because this three years in school together put us into difficult times with not having a full-time job for either of us, busy schedules with little free time for each other,” Katia said. “But, most importantly, is that we both discovered that working as a team we can reach any goal and moving to Carson City to get into nursing school has been one of the best decisions in our lives.”