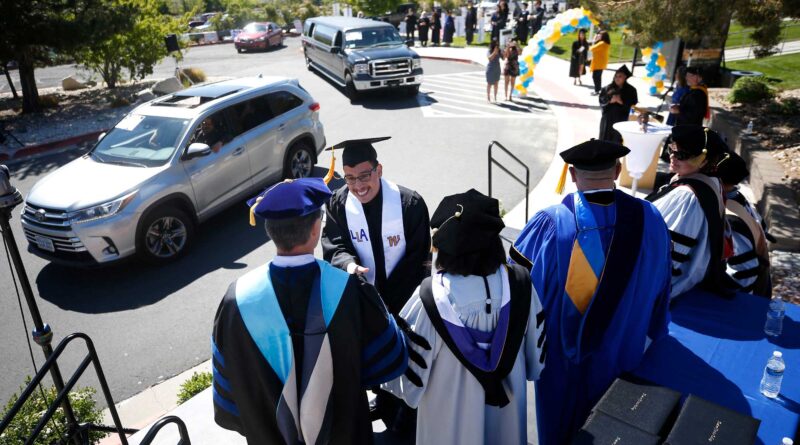 Stark historical data suggested that Victor Machuca would not go on and earn a college degree. After all, he’s male, no one in his family previously graduated from college, he didn’t have the money to pay for higher education and Attention Deficit Hyperactivity Disorder made it more challenging for him in the classroom.

But Machuca didn’t become another one of those expected statistics. He was embraced by Western Nevada College’s Latino Leadership Academy and provided with the support and means to become a successful student.

On Monday, Machuca overcame those long odds to graduate with an Associate of Arts degree in two years as Western Nevada College celebrated its 2021 graduates with the first of three drive-through ceremonies known as the Parade of Graduates.

“I feel honored being the first in my family to graduate,” he said. “Many people, family and friends from high school, I’ve seen throughout the years that quit and never came back to school.”

As he neared the end of high school in Incline Village several years ago, Machuca dreamed about becoming a computer hacker for the FBI, or working in some other capacity in criminal justice or computer science. But there was only one problem: “First and foremost, me and mom were wondering where we would get all of the money for me to be able to attend college,” Machuca said.

Those worries subsided when he met Lupe Ramirez, the founder of WNC’s Latino Leadership Academy.

“After I met with Lupe, she helped me a lot with everything including reaching out to the Disability Support Services office and helping me with my financial aid. She informed me of the funding available such as 15 to Finish, SSOG and the Esperanza Scholarship. And my mom began searching on internet for a vocational rehab services that helped people with disabilities throughout school and to get a job, too.”

Machuca did his part as well. He found a job at SaveMart and now works at Chick-fil-A to support himself after moving from his family home to Carson City. Throughout his two years at WNC, he’s worked full time.

“That first day when I was moving in, I felt homesick because I’m really close with my family,” he said. “The motivation I received from Lupe and my family motivated me to keep going.”

The Latino Leadership Academy kept him on track to graduate with its highly successful education cohort and the friendships he developed with students facing similar barriers in higher education. He also enjoyed the different cultural events presented by the LLA such as the Posada Celebrations and Dia de los Muertos.

“I knew when I first joined the program it would benefit me a lot, something that I can put on my résumé and open more opportunities for me,” he said. “There are a lot of people involved in the program and President (Dr. Vincent) Solis is very supportive of it. Lupe also contacts the students’ parents to get them involved in their children’s college journey.”

Machuca dedicated his weekends to studying and his favorite spot on campus became Joe Dini Library.

“I would always go to the library; it was pretty much my home; I’d even eat there. I would spend more time there than in my apartment,” he said.

Now that he’s a first-generation college graduate, Machuca plans to keep his education momentum going to pursue a bachelor’s degree in criminal justice at the University of Nevada, Reno. He’s already taken most of the required classes for his next degree.

With the odds that Machuca has overcome, the next chapter of his life seems more attainable, especially with the support and direction he’s received from the Latino Leadership Academy.

“Lupe will guide me with the process to start at UNR,” Machuca said.

For more information about the Latino Leadership Academy, contact Ramirez at lupe.ramirez@wnc.edu or 774-445-3271.