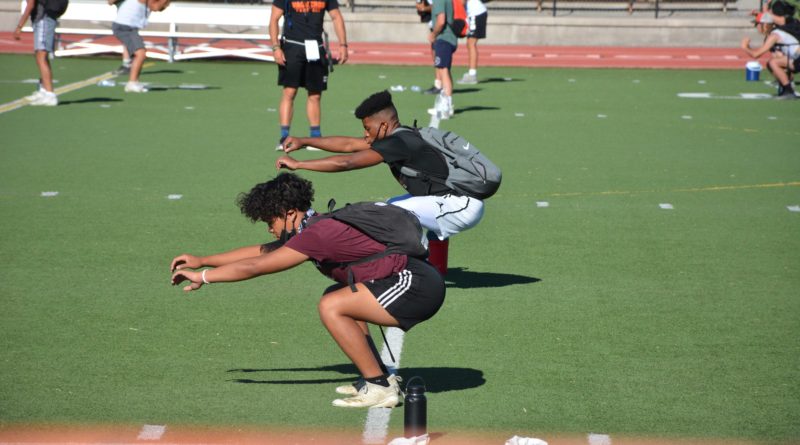 With two weeks before the start of practice and five weeks until the first game, the question of whether there will be a high school football season this fall is still without an answer.

But while they wait for that decision, it’s business, but not quite as usual, for the defending 3A state champion Fernley Vaqueros.

The Vaqueros began offseason conditioning workouts June 22, following the announcement by Gov. Steve Sisolak that relaxed some of the restrictions on gatherings, and a directive by the Nevada Interscholastic Activities Association that allowed schools to open their facilities.

While the workouts might still be football-centric, they still must maintain compliance with social distancing guidelines and other restrictions. For this year, at least, that means the number one offseason staple, the weight room, has been off limits. Previous guidelines would have limited the Vaqueros to 10 people at a time in the weight room. But because at least one must be a coach, that would mean at most nine players at a time. Updated regulations this week allow 15, but with nearly 100 players in the program, the coaches decided to forgo the weight room.

Instead, the players were instructed to fill a backpack or duffel bag with small garbage bags or grocery bags of small rocks or sand. The players then wear those to add resistance and weight as they do their exercises and drills.

“We just said it’s not worth going into the weight room,” head coach Chris Ward said.

The players use the sandbags for weight while doing squats and lunges, legwork, pushups and endurance training.

Before workouts can begin each morning, coaches check each player’s temperature and ask them a series of COVID-19 related questions. Each player is assigned a pole on the fence, and that’s where the player stands to be counted for attendance, have his temperature checked and answer the questions. The player then leaves his water, equipment bag and other belongings in that spot, and uses the same spot every day.

Players must bring masks to practice, and they must wear them during the screening process, but wearing them is optional during workouts.

“If there is a positive test, we would have to quarantine those kids in that pod,” Ward said.

During workouts, players are assigned spots on the field in their small group, and they travel in a pack between workout stations.

For sprints and other exercises, players in one pod line up across the width of the field at least six feet apart, with the other pods waiting their turns five yards behind each other.

But dividing players into more groups also requires more of the coaches.

“I’m asking a lot of our coaches,” Ward said. “I need at least four of them at all times, and then we’re keeping our distance with them.”

After endurance training, the larger groups break apart into their pods for individual work in agility stations using equipment like hoops and cones.

With no contact, the work is focused solely on speed and strength, Ward said, with only a little fundamental work. That means no sleds or blocking pads, and most of the time, no footballs.

Drills for offensive linemen are focused on footwork and technique, such as their three-step blocking progressions.

“We’re not doing mesh, because that would violate social distancing,” Ward said.

As long as restrictions continue to allow, conditioning workouts will continue through July 28.

As of now, the team is scheduled to receive its equipment July 29, followed by three days of heat acclimation practices, with helmets allowed but no pads, starting July 30.

The Vaqueros are scheduled to scrimmage at Galena August 14, and host Bishop Union (Calif.) in their season opener Aug. 21.

But whether any of that will happen as scheduled, or if at all, is anyone’s guess.

“We hope so, because we’ve got a good group of kids,” Ward said. “We think we could have another outstanding season.”

But if social distancing guidelines, or limits on the number of people allowed in gatherings are not relaxed, will players be allowed to line up in formation and practice plays? Will handoffs and passes, blocking and tackling, be allowed?

In the end, it could all be preparation for a season that never happens.

“We worry about that all the time,” Ward said.