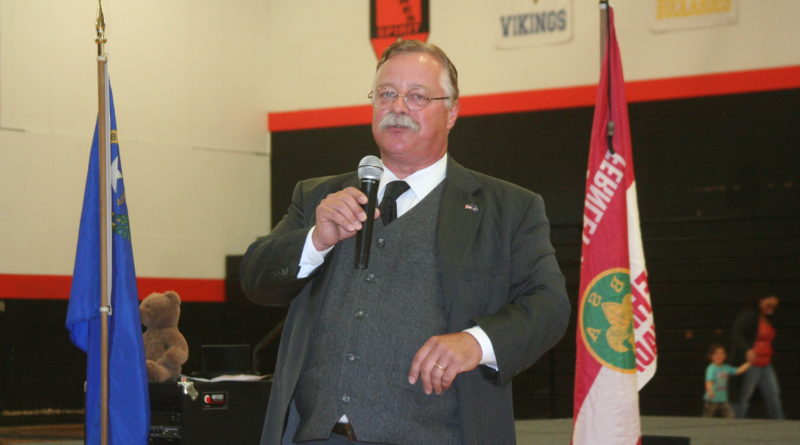 Despite being the only U.S. President born in New York City, Teddy Roosevelt’s legacy lies in the western states.

Although he’s better known for establishing five national parks and a multitude of other national forests, monuments and game preserves, it was his signing of the National Reclamation Act of 1902, that paved the way for the construction of the Derby Dam and Truckee Canal, and led to the establishment of the Newlands Project and the establishment of Fernley.

On April 14, Joe Wiegand brought his Teddy Roosevelt Show” to Fernley, regaling a crowd of about 350 with first-person tales of the life of Teddy Roosevelt, the 26th president of the United States.

The show was hosted by the Friends of the Historic Truckee Canal.

Wiegand has become a nationally-renowned performer portraying Roosevelt, having played Roosevelt on several television shows and in performances across the country, including at the White House, and in Roosevelt’s hometown of New York City.

In Fernley, Wiegand told Roosevelt’s life story in a series of stories, ranging from his childhood as a small, weak boy with asthma. He described how his mother, who had grown up in Georgia, was portrayed in a story in the Atlanta Journal-Constitution.

As Roosevelt, Wiegand described going to college at Harvard, being elected the youngest member of the New York General Assembly, of the death of his wife and mother on the same day after the birth of his first daughter, and of buying a cattle ranch in the Dakota Territory.

“I later told the people of Fargo that I would never have been president, but for my experience in the Dakotas,” he said.

Wiegand spoke of Roosevelt’s love of hunting with a tale about a trip to Africa after his presidency, and how the Teddy Bear was named after Roosevelt after an unsuccessful hunting trip in Mississippi.

Wiegand closed with encouraging words, speaking of Roosevelt loss when he ran for mayor of New York City.

“I came in third, out of three,” he said. “That’s last place. What if I had given up on politics and public service after such a humiliating defeat in my home city? I would have never been your president, fighting for the Square Deal.

“Life will knock you down,” he continued. “Your duty to yourselves, to your family and indeed to the Republic, is that when life does knock you down, you are to get back up again, dust yourself off and get back into the fight.”