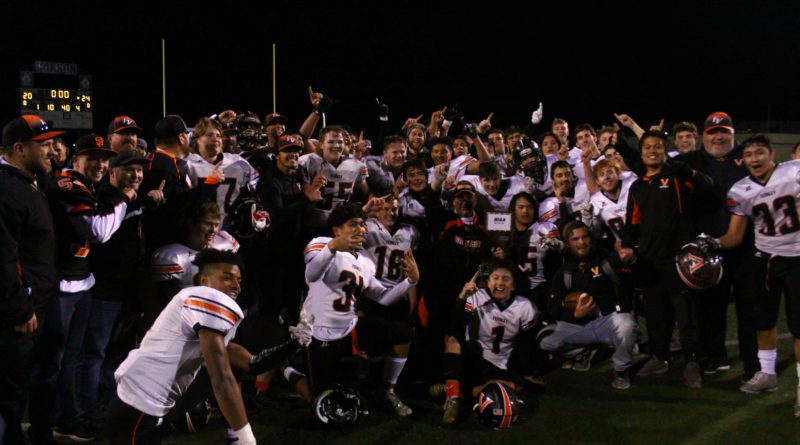 Fans, families and friends gathered around Fernley High School football coaches and players to celebrate on the Carson High football field after they ended a 55-year state championship drought with a 24-20 win over Fallon last Saturday night, most of them were feeling an excitement that was stronger than any words they could find.

“When it was over, it just felt amazing,” senior center Frank Morser said. “It just showed everyone that the underdogs have that chance of winning.”

They may have been the underdogs, but the Vaqueros executed their game plan on both sides of the ball with the confidence and poise of a champion.

“It’s been the best we’ve ever played,” junior defensive end David Sisneros said. “We came out 110 percent, from the beginning to the end.”

The Vaqueros controlled the ball for nearly 35 of the game’s 48 minutes on offense, while the defense kept Fallon’s electric quarterback Elijah Jackson from torching them with the improvisational big plays like he did in Fallon’s regular-season 42-35 win over the Vaqueros on Sept. 6.

“It kind of shows you a lot of good football gets played in about a 30 mile radius,” coach Chris Ward said. “They’re a very good team, they’re fast and athletic, good schemes, and they are good. They are really good.”

Jackson did connect on one such big play, a 75-yard touchdown pass to Brock Richardson, that put Fallon ahead 7-0 with 4:56 left in the first quarter. On a third-and-5 play, Jackson felt pressure from the rush and stepped up in the pocket, but as he was running into trouble, he fired the ball deep with a flick of the wrist and found Richardson down the right sideline, who took it the rest of the way.

But from there, the Vaqueros largely bottled up Fallon’s offense. The key was a switch from Fernley’s base 4-man front to a 3-man front, aimed to put another backline defender to help prevent Jackson from being able to scramble up the middle.

“What we didn’t want to do was give him the inside and then try to ask our ends to try to run contain,” Ward said. “We were trying to pressure him up the middle to force him out, then our pursuit can run him down, and it worked well.”

The Vaqueros, meanwhile, struck back with a big play of their own, a 65-yard pass from Miles Steele to Lonnie Halterman to tie the game at 7-7 with 56 seconds left in the first quarter.

“After we scored right there, we knew we could hang, because we knew it was going to be tough from the get,” Morser said. “As soon as he caught that touchdown pass, we knew it was achievable.”

Fernley’s next score came in more typical fashion, a clock-eating 17-play, 90-yard drive leading to a 5-yard touchdown run by Brandon Reyes that put Fernley up 14-7 with 3:56 left in the half.

Fallon got down to the Fernley 10-yard line in the closing seconds of the first half, but on fourth-and-11 from the 12, Jackson was flushed out of the pocket and scrambled toward the sideline. His pass into the end zone was incomplete on the last play of the half.

After the teams traded empty drives to open the second half, the Vaqueros took over on their own 1-yard line following a Fallon punt, and drove 79 yards in 15 plays, for a 37-yard field goal by Jack Knodell to extend the lead to 17-7 with 47 seconds left in the third quarter. The drive was kept alive when Fallon was called for roughing the punter on Lonnie Halterman, who was trying to kick the ball from his own end zone.

Fallon’s Tommy McCormick returned the ensuing kickoff 80 yards for a touchdown to pull the Greenwave back within 17-14. Starting at their own 35-yard line, the Vaqueros got runs of 16, 41 and 2 yards by Steele, leading to a 6-yard touchdown by Reyes to put the lead back to 24-14.

An interception in the end zone by Julian McIntyre and a fumble recovery at the Fernley 5, the last two of Fernley’s four red zone stops in the game, kept the Greenwave at bay.

Fallon managed a 5-yard touchdown pass from Jackson to McCormick with 1:24 left in the game, but Anthony Thompson recovered the onside kick for the Vaqueros, setting off a delirious celebration.

“We’ve been playing football, working our ass off since May, and it pays off right now,” Piroddi said.

The championship was the first for the Vaqueros since 1964, and the fourth overall in school history. The other two came in 6-man football, in 1952 and 1956.

“That was freaking exciting,” Morser said. “It was awesome to see the whole town rally behind us. I’m glad we could bring that win home for them.”

One thought on “Vaqueros win first football state title since 1964”