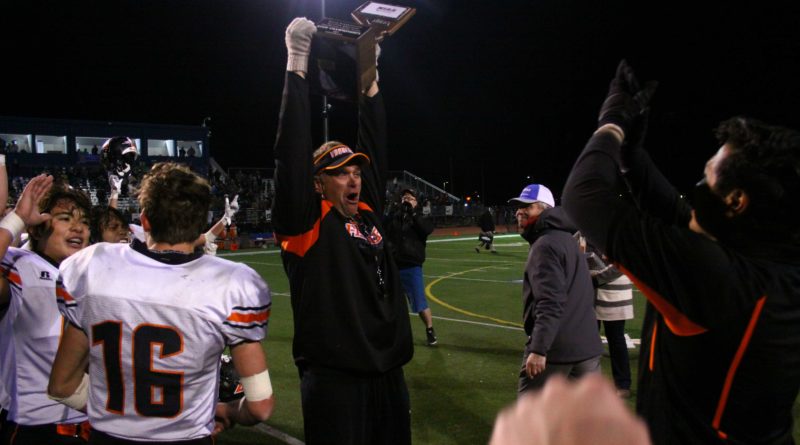 The following are some notes and quotes about key aspects of Fernley’s 24-20 win over Fallon in the 3A state championship game last Saturday night in Carson City.

The Vaqueros rarely deviate from their base 4-man defensive front, because, like their flexbone offense, that defense is adaptable to almost any alignment or scheme the opponent may run.

But in the last couple of years, it’s been the improvisational ability of Fallon quarterback Elijah Jackson that has caused Fernley the most trouble against the Greenwave. In Fallon’s 42-35 win over Fernley Sept. 6, Jackson repeatedly scrambled out of trouble and made big plays either with his legs, or by finding receivers open deep once he got out of the pocket.

Fernley’s answer in Saturday’s state championship game was to switch to a 3-man front. The theory behind the change was to bring the pass rush up the middle, and when Jackson scrambled, to flush him to the outside, where the defenders had better pursuit angles. Even then, it wasn’t a foolproof plan, as Fallon’s first touchdown showed. Jackson felt pressure up the middle and stepped up in the pocket, and although he was surrounded and had nowhere to go, he was able to fire the ball deep to Brock Richardson down the right sideline, for what wound up a 75-yard touchdown pass.

The plan was mostly successful, however.

“We were trying to pressure him up the middle to force him out, then our pursuit can run him down, and it worked well,” coach Chris Ward said.

The Vaqueros also put in a couple of new wrinkles offensively, and one in particular paid dividends.

With Fallon leading 7-0 after that Jackson-to-Richardson touchdown, the Vaqueros tied it on a big pass play of their own, 65 yards from Miles Steele to Lonnie Halterman. Halterman began the play by pretending to block as Steele faked a handoff, then he released on a deep crossing route. When he got to the other side of the field, he was all alone to make the catch, and Richardson couldn’t catch up to him as he took it the rest of the way for the score.

“We drew that one up this week because we were expecting that two-high and they bring that backside safety down. And then we saw that free safety rolling out of there, so it was going to be open,” Ward sad. “We set it up by that run and we go up there and trying to throw a stock block and then slip him and go, and he opened up big. It just shows we can score quick, too.”

Anthony McIntyre spent most of the year playing on the JV team, before being brought up to the varsity to provide depth for the playoffs. While he was on the field for a few snaps in the first couple of playoff games, an illness to Kyle Jones provided McIntyre an opportunity, and he took advantage.

First, with Fernley leading 14-7 in the third quarter, McIntyre was the lone defender as Jackson lofted a deep pass for Kenji Armbruster. McIntyre got inside position and was able to leap and deflect the ball away.

Early in the fourth quarter, McIntyre found himself in the same situation, but this time he came down with the interception in the end zone to preserve what was a 24-14 lead at the time.

“I wasn’t expecting to get in the game, but I guess I came up big,” McIntyre said. “It’s amazing. We’re all a family, we all love each other. I don’t think I’ll ever be on another team like this.”

Flexbone works to near perfection

At the 2009 Wisconsin Football Coaches Association clinic, Navy coach Ken Niumatalolo, the foremost practitioner of the flexbone offense, laid out the offense’s foundational philosophies. Among them is running the ball and controlling time of possession. Niumatalolo said one goal in every game is to hold opponents to have a maximum of eight possessions in a game.

Saturday, the Vaqueros controlled the ball for almost 35 of the game’s 48 minutes, and ran 64 offensive plays, to just 40 for Fallon, and Fallon got just seven offensive possessions. It would have been eight, but Fallon’s Tommy McCormick eliminated the need for a possession when he returned a kickoff for a touchdown after a 38-yard field goal by Jack Knodell had made it 17-7 with 33 seconds left in the third quarter.

“That’s how our offense is designed, we want to just take the ball and grind down the field,” center Frank Morser said.

The Vaqueros controlled the ball for 10 plays on the game’s opening drive, and even the drive in which Steele hit Halterman for the 65-yard touchdown was a 7-play drive. Fernley’s best possession was a 17-play drive that covered 90 yards and burned more than eight minutes off the clock before it ended in a 5-yard touchdown run by Brandon Reyes that made it 14-7 with 3:46 left in the second quarter. Fernley also had a 15-play drive in the third quarter, helped by a roughing the punter penalty on Fallon that allowed them to keep the ball. That drive started at their own 1-yard line after a Fallon punt, and ended in a 37-yard field goal by Jack Knodell that made it 17-7.

Another of the key tenets of the flexbone philosophy is to go for it on fourth down in short yardage situations. The Vaqueros had three such opportunities Saturday, and converted on two of them, once from their own 46-yard line, and the other from their own 34.

“We had to keep their offense off the field,” Ward said.

“We had to change that banner,” Halterman said.