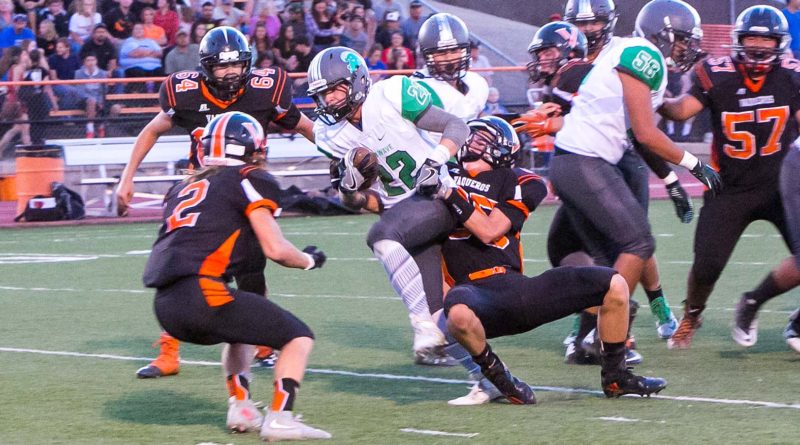 After a competitive loss against Fallon in their season opener last Friday, the Fernley Vaqueros take the field tonight against Lowry in search of their first win.

The Vaqueros host Lowry at 7 p.m.

Fernley lost its opener 26-13 to Fallon last Friday, a game in which the Vaqueros had great success running the option with 287 yards rushing, but turned the ball over five times and had 85 yards in penalties. Lowry comes into the game off a 45-7 loss to Spring Creek in its opener last week, a game that was played with a running clock for most of the second half.

“Spring Creek’s a pretty good team, and the verdict is out on us yet, so we don’t know where we fit in on that,” Fernley coach Chris Ward said.

Under new coach Taua Cabatbat, Lowry has made some drastic changes on offense, switching to a one-back shotgun offense out of which they run the zone read. The Buckaroos ran the ball 41 times for 139 yards against Spring Creek, at only 3.4 yards per carry. They threw the ball 12 times, completing 6 for 64 yards.

Defensively, they run the same 4-4 front, four linemen and four defensive backs, they have run for many years.

“We’re preparing for multiple fronts, because teams have done that before against us in the past,” Ward said.

Ward said before the season the Vaqueros had the ability to throw the ball better than they did last season, but against Fallon, they ran the ball 48 times and threw 17 passes.

“It was just what they presented to us and we had some success with it,” Ward said. “In a lot of cases there wasn’t a lot of reason to throw the ball. I thought we were moving the ball pretty consistently. We outdid them in first downs and things like that. We were running it and we just shot ourselves in the foot.”

Ward said the Vaqueros need to be able to control the ball, avoid turnovers and play sound defense in order to beat Lowry.

“Obviously if we can control the ball and use up the clock, their offense is not out on the field,” he said. “Defensively just got to be solid, don’t blow any assignments or anything like that.”

Ward chalked up many of the penalties to first game jitters to the excitement of the rivalry against Fallon.

“Hopefully we get those out of our system and we do make a big jump this week,” he said.