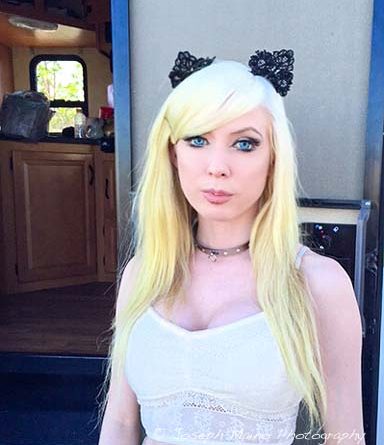 For many people attending Burning Man, Fernley is the last stop to stock up on supplies for the weeklong festival on the Black Rock playa. We spoke with many of those visitors about why they attend the festival and their thoughts on Fernley.

“I like the culture. I like the art. It’s a very eclectic festival. You are never going to see everything in one go, that’s why you see people returning.” said Isabella, who is originally from Surrey, United Kingdom and now lives in Denver. This is Isabella’s sixth year returning to the festival.

Burning Man moved from San Francisco to the Black Rock Desert in 1990 and the City of Fernley and Burning Man have been learning about each ever since.

Burners seen at Walmart and Lowe’s were interviewed about their Burning Man experience. Most Burners identified themselves by first name or nickname only.

Cano, short for “volcano,” is an IT engineer from Denver. This is his third time at Burning Man.

“I can’t get enough,” he said. “My first year I had a hard time on the Playa. I had medical issues. I got dehydrated. I did not want to come back after the first time, but here I am. Last year I learned to not have expectations, to go in with an open mind. Whatever happens is supposed to happen.”

The Black Rock Desert playa weather is unpredictable and can be violent. Temperature extremes, high winds with dust storms and monsoon like rains are all possible during the festival. With no vendors on site, Burners need to take everything they need to survive in any conditions throughout the week.

When Cano was asked what he thought about the City of Fernley and its citizens he said, “It seems like a nice little town and I really like how the town has come together to support the event. It seems very welcoming. I understand how this group (Burners) can be very eclectic. It’s not your normal every day crowd. We appreciate the locals having patience.”

This is Steven’s fifth Burning Man. He has two degrees in theater and engineering and he uses both of those skills building his camp.

“I use my skills to build the stage,” he said. “(I am also) building a large oversize alarm clock. It’s 10 feet tall and 15 feet long. It just blinks ‘12.’ Comes from the idea that when you wake up in the middle of the night and the power went out and your clock just blinks 12 at you. It represents how much we are dependent on technology.”

When asked about his Fernley experience, Steven adds, “I stopped at the Print Shop. The people there were really helpful. The person that was driving was pulled over for making an illegal u-turn. The officer was really nice and gave us directions on how to get to the hotel we were staying at.”

Las Vegas native Megan works as a legal assistant. A first time attendee, she is a Burning Man virgin. Megan is a mechanic’s daughter and knows how to fix things. She is also classified as a “fluffer,” meaning she brings the workers water, makes sure they take rest breaks and stay hydrated.

“It’s like modern day Woodstock,” she said. “Why wouldn’t want to experience that? I am looking forward to the culture. The giving and how people do not expect anything from you.”

Seattle’s Lisa has been going to Burning Man for eight years.

“I keep coming back to have my “best year.” I’m already planning for next year. Can’t wait to see the camp set up. So many people work so hard.” Lisa said.

Camps are the “cities” within the city of Black Rock during the festival. Although there are a few fancy turnkey camps where hired help do everything for the turnkey camp Burners, most camps are made up of Burners who live in old yurts, tents and RVs. The festival goers at these camps all work together and support the camp’s activities.

Married for 36 years, Bobby and Tom are enjoying their ninth Burning Man and belong to camp Sin City Village. They are Nevada citizens and Tom works for Clark County. Bobby is the camp’s mayor.

One of the major contributions to the camp is Bobby and Tom’s “Party Naked Tiki Bar.” The clothing optional bar serves a special libation composed of rum, vodka and fruit punch.

“If they take their clothes off, they get a Hawaiian lei. That’s right, if you get naked you might get ‘lei-ed,'” Bobby said. “It’s strictly nudity. It’s not sexual in any form. It’s a way for people to experience public nudity for the first time. They will drink a couple glasses of punch to screw up the courage to get naked.”

Another Burning Man virgin, Sandy is a molecular biology graduate student working on her PhD.

“It was a spur of the moment,” she said. “I didn’t even have a ride from the airport. I really like all the art.”

Sandy belongs to camp Voodoo Boom. This camp has four art cars decorated with voodoo scenes that are all synced up with their lights and sounds.

“Many reasons to keep coming back. The people who go there and the things that go into Burning Man make you feel amazing,” he said. “Every year I go we end up building new things. It’s really gratifying.”

Shai also notes, “I really love the people here (Fernley). Every time they are super friendly. Even when it gets real busy, they are excited to see the cars coming through.”

When it comes to some Burners leaving trash in Fernley, Shai says, “ People who have been going for a while have an ethos about them to “leave no trace.” Unfortunately, some of the new people attending have not developed that ethos yet.”

In addition to all the interesting Burning Man people and vehicles, Burning Man has an impressive financial impact on the City of Fernley. According to Fernley’s City Hall, Burning Man’s annual economic contribution to the city is conservatively estimated at $1,148,400 and does not include the money’s earned by our local businesses that provide services directly to the Burning Man organization, i.e., electrical contractors and suppliers, trash and debris removal, auto repair, etc.